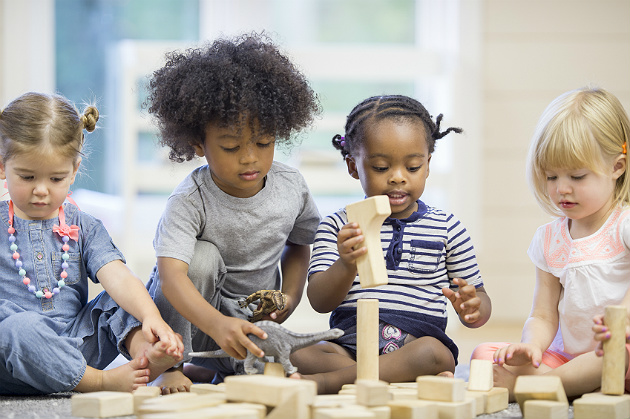 This is the second article in a three-part series that examines the changing role of play in education: Part I | Part II | Part III

Play embodies a plethora of activities that activate the child's growth on multiple levels — physical, neurological, emotional, intellectual — all simultaneously. The important role each type of play has in the development of a preschool-aged child was addressed in my previous article.

Still, some educators along with parents concerned about school readiness, academic standards and their child's competitiveness in today's world may be uneasy when valuable class time is devoted to play instead of work. School principals can address this uneasiness not only by pointing to recent research but also by demonstrating the high quality of play at their school and the vital role of the teacher in facilitating these activities.

To begin with, the words play and work need clarification. Maria Montessori's famous quote, "Play is the work of children," illustrates a parallel between play for children and work for adults in terms of importance. Yet this statement isn't to be taken literally.

Play and work are neither synonymous nor opposites, but complements.

"Play and work function together in serving the child in adapting to and learning from experiences," according to an academic paper entitled "Play in Early Childhood Education" out of Pennsylvania State University.

Work activities, as defined in the paper, are stimulus-oriented — such as exploration, construction, investigation and imitation. Pretending and group games where personal meaning takes precedence over adapting to an external reality would be considered play. When left to their own devices, children tend to flow freely between the two.

"Hardly ever would one label what a child does as pure work or pure play," cites the above paper.

If work and play are seen as distinct but interdependent learning tools, this removes the all-too-often imagined hierarchy between the two.

"It's counterproductive when children are taught that playing and learning are two separate things," says Matthew Eisen, director of CiCi Idiomas, a center for language and culture outside Mexico City.

Eisen cites the common scenario of a teacher instructing students to sit down and learn then they get to play as a reward. He recommends reframing this as, "First, we are learning with books, then we'll continue to learn out on the playground."

As adults, we need to examine our own biases toward play and work in school before unconsciously passing them on. Many of us were brought up to think play was like a sugary dessert we could eat once we finished our schoolwork. Teachers able to foster the attitude that play is an excellent way to learn, validate their students' intuitive knowledge of play's inherent value.

Unstructured play embodies free choice and orients children to their experience instead of towards results. It's inspired by the child's intrinsic motivation, not to please someone else. Therefore, interfering or leading play goes against its very essence and stifles the child's creative expression and autonomy.

"When play is controlled by adults, children acquiesce to adult rules and concerns and lose some of the benefits play offers them, particularly in developing creativity, leadership, and group skills," writes Kenneth R. Ginsburg in an American Academy of Pediatrics report.

Factors such as excessive passive entertainment or screen time, toys that are detailed mini replicas of real objects or parents who push them academically from infancy may lead children to struggle with anything that isn't literal or spelled out for them. Here, skillful intervention by teachers can serve to raise the quality of play to facilitate more profound mental and emotional functioning.

Eisen says adults need to encourage a deeper level of play that involves team building, cooperation and resolving conflicts instead of going for an easy solution like just handing kids a soccer ball.

Jorgelina Carranza, a preschool teacher at La Escuela Valle de Bravo for over 14 years, explains how teachers can guide play by providing alternatives that don't pressure students toward a certain outcome.

A particularly useful strategy when children are heading toward conflict or showing recklessness is to shift their focus by setting out interesting materials such as cloth and clothespins, large cardboard appliance boxes and markers or sliced tree trunks during recess. Curiosity is sparked, and most children begin to interact with the new materials without any teacher intervention.

"Each child's imagination reflects what that individual needs to express and develop at that moment," Carranza says. "They transformed the boxes into a tunnel, a rocking boat and an airplane with controls drawn with the markers. While pretending they employed negotiation and teamwork as well as mathematical, artistic and scientific capacities."

Meanwhile, teachers observed each student's behavior in response to this new situation and assessed where that particular child's growth could be supported by specific work and/or play activities. According to writers of the Penn State paper, play evaluation on the part of teachers is key in gauging what children are doing so they can be guided toward a more developmentally enriching play.

In this case, play was enhanced by the teacher simply opening up new possibilities with materials which triggered the imagination. On other occasions, a direct style of intervention is necessary to facilitate higher-quality play that reflect the child's current developmental stage.

A common example is students acting out the violent shooting games they play at home on their tablets. Here, Carranza says she will step in and tell them no weapons are allowed at school, then challenge them with an open-ended task to motivate them in envisioning new scenarios and roles for themselves.

The skilled preschool teacher highly values and nurtures the child's fundamental creative and imaginative nature with countless opportunities and environments for exploration and play. Preschool and kindergarten programs that strike a healthy balance between stimulating work and engaging play prepare the child for success in primary school and beyond. They empower these individuals to go beyond functioning in a competitive world to making valuable changes in that world.