The play debate: Primary and beyond 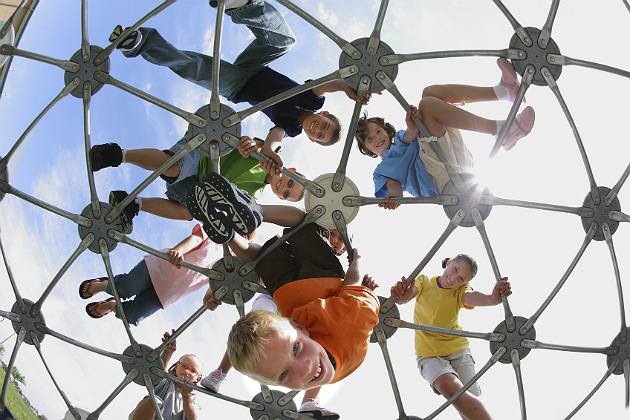 This is the third article in a three-part series that examines the changing role of play in education: Part I | Part II | Part III

Ask primary students what their favorite school subject is and most will say, "Recess!" As adults we may laugh at this response and say, "I meant just real subjects."

But it's no joke. Play — on the playground, in the classroom and after school — is still essential to children's mental, emotional and physical well-being at this stage of their lives.

"Children who do not play or who do not have the opportunity to play are at increased risk for abnormal development and deviant behavior. Without play, self-control does not develop adequately," says Jeffrey Goldstein, Ph.D., author and research associate at Utrecht University in "Play in Children’s Health, Development and Wellbeing." "Without play, optimal learning, normal social functioning, self-control and other cognitive functions may not mature properly."

From the students' point of view, recess is a time to be with friends, run around and have fun doing what they want to. The American Academy of Pediatrics (AAP) also considers recess a high priority because it allows children "an essential regular respite from rigorous cognitive tasks to rest, play, imagine, think, move and socialize. Afterwards, students are more attentive and better able to perform cognitively," says their policy statement, "The Crucial Role of Recess in School."

"Active play has the paradoxical effect of increasing attention span and improving the efficiency of thinking and problem-solving," Goldstein states. "Two hours of active play per day may help reduce attention deficits and hyperactivity."

Yet despite its backing by highly reputable sources, free time is frequently taken away as a consequence for the student who doesn't behave or finish assignments. At some schools, recess has been abbreviated or eliminated completely due to safety issues or the erroneous belief that more time allotted to academic studies will give students the edge they'll need to face tomorrow's challenges.

However, nothing could be farther from the truth. According to Goldstein, "Play increases brain development and growth, establishes new neural connections, and in a sense makes the player more intelligent. It improves the ability to perceive others' emotional state and to adapt to ever-changing circumstances."

As teachers, many of us have taken recess away from a naughty child — a seemingly logical consequence. The AAP strongly argues against this practice: "On the basis of an abundance of scientiﬁc studies, withholding recess for punitive or academic reasons would seem to be counterproductive to the intended outcomes and may have unintended consequences in relation to a child's acquisition of important life skills."

On the other hand, the well-being of students on the playground is a valid concern in some schools.

"Recess seems like a time for kids to get some exercise or just have fun, but unless there are adults actively paying attention to and supporting a high-quality recess, it can be a time when kids feel unsafe, physically and emotionally," said Milbrey McLaughlin in Stanford News. Here, a high-quality recess refers to a healthy and safe atmosphere where inclusiveness and positive language prevails.

"Teasing, fighting, bullying behavior, the injuries and disciplinary referrals are enough to keep any principal up at night," explains Jill Vialet the Founder of Playworks, an organization which has provided recess support for over 20 years. "In the age of 24/7 digital distractions, many children come to school not really knowing how to start games, or keep games going with teamwork and conflict resolution skills that help them engage in safe and healthy play. In some under-resourced areas, playing outdoors actually may be forbidden by their parents for safety reasons."

Along with other Stanford researchers, McLaughlin conducted a study that involved sending coaches from a recess-based nonprofit into six low-income schools to examine what happened if recess was coached by adults. The response from students, school staff and administration was positive — bullying and conflict between students dropped, girls got more involved, and a higher percentage of students initiated games.

"We saw how a positive recess experience can benefit classroom climate in low-income elementary schools through students' improved conflict-resolution skills and sense of teamwork," McLaughlin concluded.

While coached recesses are favorable in certain situations, the AAP warns school officials against "sacriﬁcing the notion of recess as an unstructured but supervised break that belongs to the child." Creative and free play, fundamental components of a child's normal growth and development, need to remain an option during recess.

Play in elementary school is often relegated to recess time — but teachers who employ it in the classroom attest to its high educational value. Games and other playful activities are the perfect tool to open, extend or reinforce topics or subject matter.

Teachers can adapt games, including those they played as children, to serve their educational aims or look online for ideas. I've personally found that students get excited about something as simple as playing Hangman, which I use to review spelling and vocabulary for my English learners.

Fantasy play as well as creative dramatics, is viable for older students who are capable of developing more complex scenarios that most early-elementary children. Improvisation and role play allow students to enter and experience literature and history first hand, making lessons vivid and personal. Language study, whether native or foreign, particularly lends itself to dramatization as well.

Play doesn't necessarily need to be directly linked to a particular theme or lesson to be effective in the classroom.

Natalie Flores, a high school ESL teacher found her students easily distracted at the beginning of the school year, so they made an agreement. Each Tuesday, a student brings in an idea and leads a game during the first 15 minutes of class with the condition that everyone concentrates for the rest of the 90 minute period and their Tuesday class. They can use any vocabulary or skill — the only rule is to use the language they've studied at some point in the game.

"Not only has their attentiveness in class increased, but they've become more united as a group," reports Flores.

Schools have the potential to contribute significantly to children getting the playtime they need, but the responsibility shouldn't fall on educational institutions alone. Children, ideally with parental support and encouragement, need to make active free play one of things they do at home.

It's time for us as adults to act on everything we know about play's benefits and do our part making it integral to the lives of older children so they can get the most enjoyment out of their short childhood and be better prepared to grow into responsible adults.