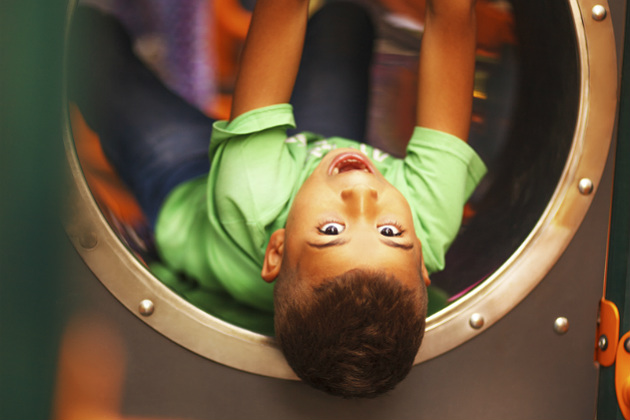 This is the first article in a three-part series that examines the changing role of play in education: Part I | Part II | Part III

Growing concern about preschool and kindergarten students being ready for the academic rigors they'll face in primary is leading some schools to shift the focus away from activities seen as less fundamental. This frequently translates into reduced time for recess, free play or creative arts; and a larger portion of the school day spent seated in direct instruction.

"Play is a major occupation of childhood and essential to children's mental health and their overall development,'' said James Johnson, professor of education in curriculum and instruction and program director for early childhood education in the College of Education at Penn State.

Play fosters the development of language, social, physical, math, science and thinking skills, which will serve young children in academic subjects later on. Their self-esteem grows as a result of enhancing these abilities.

Yet what free play offers youngsters goes beyond honing a set of skills. It promotes a level of self-confidence that comes with exercising their power of choice.

"For kids under 5, play is the foundation for creativity, constructive problem-solving, self-regulation and learning as a whole," says Susan Linn, author of "The Case for Make Believe" in a Parents Magazine article. Leaving kindergarten with a base that includes self-assuredness, age-appropriate mental and physical capabilities and the ability to think creatively, gives children more capacity to meet the academic challenges they face as they get older.

As educators committed to facilitating such a foundation in our students, we may wonder if any type of play — physical, manipulative, dramatic and creative — is more critical to reinforce at this age.

The benefits of incorporating the physical aspect in play is emphasized by Peter Pizzolongo, associate director for professional development for the National Association for the Education of Young Children (NAEYC), which has included play as a criterion in its accreditation process for programs for young children.

"When you're a preschooler or toddler, your attention comes out in a different way," explains Pizzolongo in a recent article. "Your attention works best if your body is involved, as many parts of it as possible. So children learning to play where they're physically engaged with materials and interacting with each other would work best."

Whole body activities — running, jumping, climbing on play structures, and playing with balls, jump ropes and hula hoops — not only develop gross and fine motor skills but also give children a physical outlet for their emotions. Manipulating small objects such as beads helps children develop hand-eye coordination, fine motor skills and control of their hands and fingers, which aide them in writing later on.

Raquel Ary-De Rozza, who spent more than 35 years as an early childhood educator and has taught ECE teaching courses on play dynamics, is a proponent of dramatic play where children, using toys, costumes or pure imagination, create characters and transport themselves into a fantasy world of their own making.

"Fantasy play involves critical cognitive skills where children learn to organize and re-organize the meanings and actions of their experiences, thus fostering skills for daily problem solving. The rational and self-regulatory aspects of children’s personalities and behavior are strengthened in such ways," Ary-De Rozza said.

"For me, all types of play are important, because through them the child relates to others, communicates and expresses the ideas and feelings that he or she is experiencing in that moment," explains Karina Cárdenas Zepeda, director of Montessori Valle de Bravo and a Montessori guide for 14 years.

From the experience of the education experts cited, each play form plays an integral role in a young child's evolution. Fortunately, children don't adhere to these categories. When playing freely, they naturally combine several types of play, reaping the benefits of each.

It is key that adults don't interfere or try to guide the child's play as this stifles the child's creative expression and autonomy. Children can move at their own rhythm when they are directing their own play and discover what truly interests and inspires them.

When playing with others, they have the opportunity to learn and develop teamwork skills such as sharing, negotiation and conflict resolution.

"As guides, we need to step back and allow the game the children are playing to take the course the children themselves desire," says Cardenas. "We should only interrupt if someone is in danger."

Penn State's Johnson warns professional educators not to ignore the play worlds of children, or "you will be putting them at risk of not being able to reap the most out of their educational encounters. The opposite of play is not work; it is psychological depression. Play allows them to create their own learning experience and participants come to feel this, relish this and see the value in it."

To sum it up, Ayla Reguero, a sixth-grader at a bilingual school in Mexico, says, "For preschoolers, playing is a really important part of their childhood development. It's the base for the rest of their studies and a happy life."