How can fuel affect the aviation and marine industries? 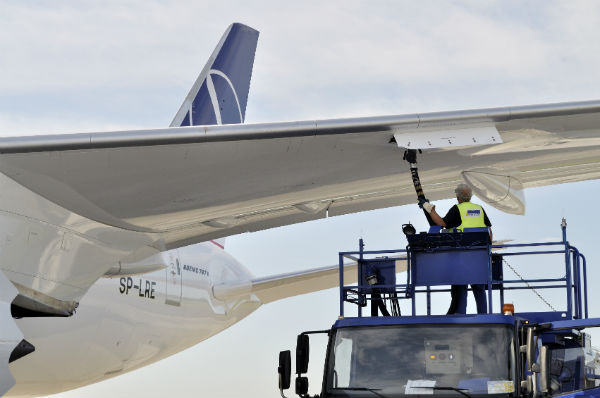 This is the second of a two-part series on fuel and transportation: Infrastructure | Aviation and marine

Nothing affects the transportation industry quite like fuel. Whether it's price, type or scarcity, the specter of gas always looms heavy over the industry of planes and boats.

While states across the nation contemplate raising taxes on gas to pay for infrastructure repairs, airlines are experiencing higher-than-expected profits. It seems, now more than ever, low gas prices are helping alleviate pain at the pump, while also pushing economic and political movement forward.

So why are so many in the transportation industry unhappy?

The effect of low jet-fuel prices on the airline industry has proven to be complicated.

Since September of 2014, the price of jet fuel has dropped, leading to higher profits among airlines. Analysts suspect that the drop in fuel price will continue to help the major U.S. airlines in 2015.

However, as it turns out, low oil prices seem to be having a different effect on different airlines. For example, American Airlines experienced a fourth-quarter boost in profit following lower fuel costs; meanwhile, United Airlines' profits dropped during the same period.

American has seen its operating expenses drop by 4.1 percent to $9.3 billion, primarily because of the 17.3 percent drop in consolidated fuel expense.

Unfortunately, United did not experience similar fortunes, at least not entirely. Because of severance costs and contracts that lost their value due to the drop in oil prices, United's fourth-quarter profits fell 80 percent. If those one-time setbacks were to be factored out, the airline's adjusted profit actually soared.

Thus, falling fuel prices can be both a gift and a curse to airlines.

Airline customers were also awash in confusion. With oil prices lower than they had been in a while, many were bewildered to find that the savings were rarely passed down to them in the form of cheaper ticket prices.

According to a press release by Charlie Leocha, chairman of consumer advocacy group Travelers United, airfares should have been lowered.

"Common sense says prices should drop when the biggest cost factor in flying nosedives," Leocha said. "This isn't rocket science. Though economists can make lots of excuses, if there were more competition, consumers would be seeing lower costs to fly."

Consumer advocate Bob Sullivan also threw red flags at the airline industry's apparent refusal to lower costs for riders during a time when airlines were saving billions due to plummeting oil prices.

"It's certainly not being returned to consumers in the form of lower prices," he continued. "Funny, because airlines added all manner of fuel surcharges and ticket price increases when gas surged in 2009."

And those fuel surcharges are the crux of the confusion.

While some international airlines like Virgin Australia and competitor Qantas, removed their fuel surcharges — which can sometimes add as much as $540 to the cost of an international round trip — the end result doesn't always leave travelers happy.

As it turns out, the removal of these fees is having little if any impact on airfare costs. Airlines are simply incorporating fuel charges into base airfare prices, and travelers' airfare tickets are pretty much remaining the same.

According to Brad Tuttle of Time Money, "In other words, the carriers are jacking up flight prices to compensate for the 'removal' of fuel surcharges. They're giving travelers a price break with one hand, while taking more money away from customers with the other. The net result is that passengers are paying pretty much the same for the cost of transportation before the changes were announced. The only thing that's changed is how the airlines break down the flight costs."

The fight over fuel in the marine and boating industry doesn't have as much to do with price as it does with type.

Currently, the boating industry is fighting tooth-and-nail over the Environmental Protection Agency's decision to issue a waiver allowing 15 percent ethanol blends — or E15 — in the market.

The controversy surrounding the fuel blend centers on the amount of ethanol used in the mixture. With ethanol being corrosive to materials such as rubber and certain metals, there is the real possibility that it can cause damage to vital components.

Ethanol also attracts and bonds with water from the air, and that water can separate out inside the tank due to phase separation. If your vehicle sits for long periods between use, the moisture settles to the bottom of the tank and can potentially clog in-tank pumps and filters. Damage is also possible in fuel lines, injectors, seals, gaskets and valve seats as well as carburetors on older engines.

According to Popular Mechanics, the damage can be worse for boats and other vehicles with small engines because they aren't designed to deal with the highly corrosive E15 blend.

In a 2010 article, Popular Mechanics noted how ethanol forms a brown goo when left in a fuel tank too long, which can clog fuel-system components: "Two-stroke engines run hotter with an ethanol blend, which accelerates the potential damage. And ethanol can wreak havoc on fiberglass fuel tanks in older boats."

With E15 being so dangerous, it makes sense that the boating industry would be up in arms about the EPA's 2011 decision to issue a waiver, allowing the use of E15 in all 2001 and newer vehicles. Although the use of the fuel is prohibited in marine engines, industry advocates fear that there can be potential for misfueling for boaters who fill up at gas stations rather than marinas.

After losing a 2014 court battle against the decision in U.S. Circuit Court of Appeals for the District of Columbia, marine industry and advocacy groups doubled down, backing a new bipartisan attempt to reform the Renewable Fuel Standard.

Earlier in February, Rep. Bob Goodlatte (R-Va.) introduced the RFS Reform Act of 2015, which would eliminate requirements for corn-based ethanol blending and cap blending levels for other biofuels. It is a modified version of a previously introduced bill.

The bill would place a 10 percent blending cap on conventional gasoline and has earned the endorsement of many groups, including those associated with both the motorcycle and boating industry.

In the end, whether on land, sea or air, it is fuel that drives the transportation industry forward. Whether used to pay for infrastructure repairs, fund airline profit boons or upset the marine industry status quo, the influence of fuel cannot be denied.