What’s the best distance to practice at for self-defense? It’s not what you think 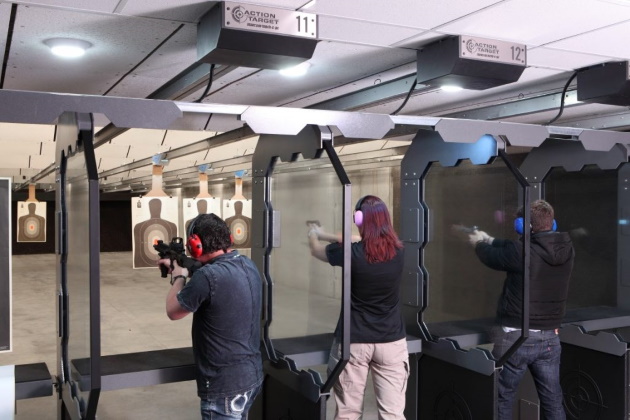 I see the debate of how far out to put the target almost every time I go to a range during public hours.

Put it too close and it doesn’t look very “cool.” Put it too far and it would be embarrassing to miss.

Should I put it at nine feet since an “average” self-defense encounter happens within three yards, lasts three seconds, and three rounds are fired?

The answer is a little simpler and a little more flexible than you may think.

There are a couple of distances that are important.

The first distance is six to 10 feet.

Six feet is about as close as you can get to a hanging paper target without the muzzle blast from normal self-defense rounds moving the paper too much. Six to 10 feet is close enough that any gun/ammo combination can shoot 1” or better groups.

Drilling holes flat footed at the six- to 10-foot range is an indication that you can align the muzzle properly and press the trigger without disturbing muzzle alignment.

Any flyers or problems that show up here will be magnified with distance, stress, speed, and movement.

Grip, stance, breathing, and follow-through all help, but muzzle alignment and trigger press are the only two things that are vital.

This seems like it should be simple, but what I’ve found over time is that only about 10% of shooters who carry regularly…including military, law enforcement, competition, and concealed carry permit holders…can actually shoot a five-round 1” group at 6-10 feet with perfect lighting and no time constraints.

If you’re in the 90% who throw an occasional shot at six to 10 feet, it means is that you’ve got some of what I call “low-hanging opportunities for improvement” that will be magnified with speed, distance, movement and stress. Work that you do here gets incredibly high leverage results and will impact all shooting that you do, regardless of the gun, distance, or speed.

Once you’re drilling holes at six to 10 feet…then what?

It depends on what phase of learning you’re in; whether you’re building a basic skill or trying to make it resilient.

If you’re trying to build skill, you want to aim for a distance where you’ve got a 75 to 90% success rate, regardless of the size of the target, speed of shooting, stress level, or speed of movement.

That may be slow fire at five, 25, 50, or even 100 yards, rapid fire, shooting while moving, or whatever combination of speed, accuracy, stress, and movement that puts you in that 75 to 90% success range.

That means that you’re hitting your intended target seven to nine times out of 10 and the misses tell you where the edge of your performance envelope is.

At first, you want to focus on perfection and a 99 to 100% success rate, but once you’re dialed in, you want to start expanding your performance envelope.

But, depending on what you’re doing, you might need/want to relax your definition of success. As an example, if you’re shooting at 50 yards, shooting fast, or training for self-defense while moving laterally off-the-x, you might call success anything in the -1 or B zone (reduced silhouette), or it might be any hit on target.

But the goal should always be to make precise hits faster, fast strings of fire more accurate, and do it under more and more challenging conditions.

I like to think of it as a sandwich.

As we cover in Praxis, this will optimize learning speed and give you the most bang-for-the-buck for your training time and training dollars.

If you’ve got the skill built and you’re working on making it resilient to stress…by whatever means of stress inoculation you happen to be using…then you might want to push things to the point where you’re only succeeding 25% of the time…but you still want to dial stuff back to where you know your performance envelope where you can succeed 75 to 90% of the time and end with a win.

How’s this play out at the range?

As you see, no matter how fast and cool or how tactical you want to be, it all comes back to a solid foundation of the fundamentals…muzzle alignment and trigger press.

Get those down as a solid foundation and the sky is the limit.

Skip over them in an attempt to get to the “cool” stuff quicker and it’s like driving a sports car with the parking brake on and a clogged air filter…it’s simply impossible to shoot up to your potential. And that’s why shooters at all levels…from new shooters to guys retiring from tier I and special mission units go through our training and report dramatic improvements in performance.