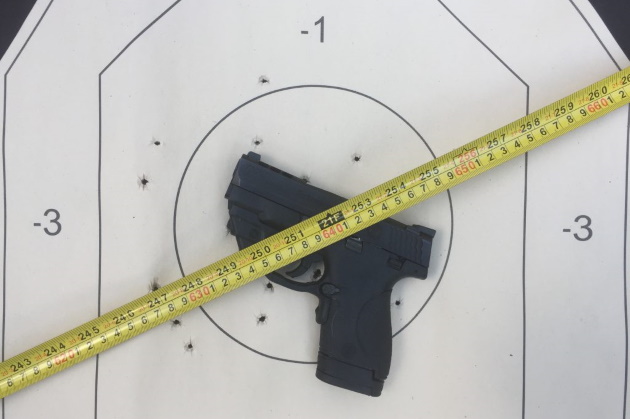 Almost everyone who shoots has heard about the “21-foot rule” and how important it is to practice at 21 feet.

I used to teach it and I’ve probably been taught it in more than a dozen classes I’ve taken.

Except, it’s a myth.

It has no basis in fact or history, and it can actually hurt your ability to effectively handle a threat that’s 21 feet away.

So, here are three myths about the 21-foot rule and how to fix them.

Myth No. 1: There’s a concept called the “21-foot rule” that was created by Officer Dennis Tueller.

The “21-foot rule” came from a drill that Tueller did with the Salt Lake City Police Department in 1983. According to Officer Tueller, it was never intended to be a rule.

It was just an illustration that it takes 1.5 seconds for an average officer to draw and hit a target at 21 feet (seven steps is a standard shooting distance) and it takes an average man with a knife 1.5 seconds to travel 21 feet and stab. This represents a “tie” and a tie is bad in a fight.

After the good guy shoots the attacker, the attacker has, on average, five to 10 more seconds to keep stabbing before they will be out of the fight. Again, a tie is bad.

Unless your attacker is running on a treadmill, they will have closed the distance during the time it takes you to draw and shoot. They’re not at 21 feet anymore. They may be within arm’s reach.

Now, is there anything wrong with standing at the line and banging away at a target at 21 feet?

Of course not…as long as you’re making hits and not reinforcing mediocre performance, 21 feet is a great distance.

Just don’t think that it’s doing you any good for a situation where you may be facing a threat who starts to charge with a knife from 21 feet away.

The original point that Tueller was trying to make is that there is a reactionary gap between when you something happens that requires you to take action and when you’ve actually taken beneficial action.

The “21-foot rule” is based on the idea that two guys will be facing off at 21 feet…like in an Old West dual…with one guy sprinting across open ground and the other standing flat-footed. It was a way to control variables so that they could get comparable results.

If you play by those rules, you will probably lose.

A counter, table, car, elevation change, or other object between you and your attacker buys you more time.

Moving laterally or at a 45-degree angle towards a charging attacker buys you more time.

Defined “go” signals…a line in the sand that’s either behavioral or physical…lets you react quicker.

If you’re not used to smoothly drawing and making hits quickly under stress, it’ll probably take you considerably longer than 1.5 seconds to make a first hit on target.

So, if drawing and shooting targets at 21 feet in less than 1.5 seconds is useless for handling an attacker armed with a knife at 21 feet, how do you train to handle the situation?

The first thing you need to do is nail the shooting fundamentals with guided step-by-step training like 21 Day Alpha Shooter.

The next step is to take those fundamentals and begin adding in the factors that exist in a real gunfight that you can’t practice at a traditional range…like:

Traditionally, this kind of training has been almost impossible to find and ridiculously expensive to do — both in terms of learning cost and ammo/time.