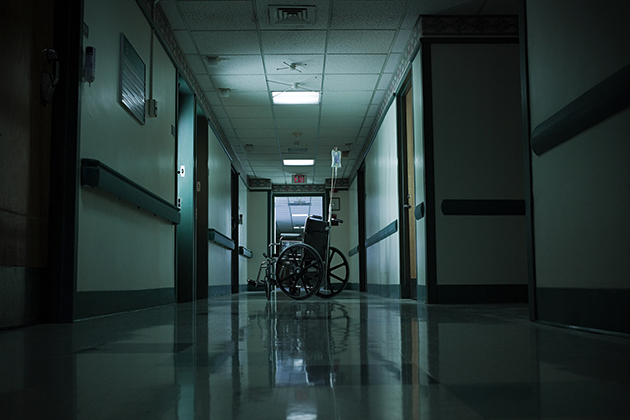 On a cold night in Baltimore, a woman who appeared to be wearing just a hospital gown and socks was being deposited at a bus stop after being discharged from University of Maryland Medical Center Midtown. A bystander happened to catch the situation on video and opened the door for the world to see the uglier side of healthcare.

Imamu Baraka's videos show a vulnerable woman being escorted to a bus stop in just a hospital gown and socks, while the temperature fell into the 30s that night. In the video, you can see security personnel walking back into the hospital. They have an empty wheelchair and ignore his questions of what they are doing.


Unable to get answers from the personnel, Baraka goes back to the woman and attempts to assist her. She is clearly not capable of caring for herself, is in some distress and is not communicating with him, although she does follow his commands to sit down. Closer examination of the video shows bags of clothes and a pair of shoes on the ground at the bus stop, and it also appears she has no undergarments on.

Baraka ultimately stops filming and calls 911 to render some assistance. An ambulance arrives, and she is taken right back into the hospital. According to The Baltimore Sun, he said he waited for two hours at the bus stop to insure they did not bring her back out again. He also he heard her say thank you as she was taken in the ambulance.

Baraka has spoken with the patient's mother since the video has gone viral. The patient's family told him she is home now with family. However, the family also told him that the hospital had put the woman into a cab to a homeless shelter, and that's where the mother found her.

Although the details that led up to this inhumane situation are not known at this time, there are no circumstances that can justify putting a woman at a bus stop on a freezing winter night with only a gown and socks on. This is not just poor healthcare decision-making, this is a demonstration of a significant lack of compassion and care for a fellow human. She is fortunate Baraka was walking by and showed some empathy to her as she likely could have suffered some serious injury, hypothermia or worse.

On Jan. 10, after the video had gone viral, the hospital made the following statement on its Facebook page:


"We share the shock and disappointment of many who have viewed the video showing the discharge of a patient from the Emergency Department of UMMC Midtown the night of January 9. This unfortunate event is not representative of our patient-centered mission.

"While there are many circumstances of this patient's case that we cannot address publicly, in the end we clearly failed to fulfill our mission with this patient, no matter the circumstances of her case or the quality of the clinical care we provided in the hospital (which is not depicted in the video). We are taking this matter very seriously, conducting a thorough review, and are evaluating the appropriate response, including the possibility of personnel action."

In a news conference, Dr. Mohan Suntha, the hospital's president, expressed his apologies to the patient and her family and the community. He stated they recognized the failure in "humanity and compassion" during the discharge and states they take full responsibility. He also noted that policies will be reviewed to ensure it does not happen again.

There is no dispute that healthcare is under constant pressure to provide care in a broken system. As hospitals become run more like businesses so they can stay open, the concept of compassion and caring no longer have room in decision-making. It becomes about the bottom line.

Right or wrong, this is how it has to be — institutions are held captive to continued regulation and are constantly trying to find ways to navigate complicated regulations and mandates.

But this is where the healthcare providers get the pinch. They want to give good care, but the system makes it more and more difficult. They get placed in situations that are no longer healthcare decisions, but human decisions, with various influences trying to impact those decisions.

For example, let's speculate that the security guards did not agree with the process, but they need to keep their jobs to care for their own families. It's the constant ethical bind most workers find themselves in each day — trying to navigate this complex, broken system.

In the end, we are all humans and need to be treated with respect and dignity. However, this video shows us that if they can, they will. From the comment by the security guard that she is medically cleared to the hospital president who stated she got the medical care she needed, they all "did what was required." But clearly this was not the compassionate, patient-centered decision-making that should be dictating decisions.

According to the 2014 report "Patient Dumping" from the U.S. Commission on Civil Rights, the depth of this problem is difficult to measure due to a lack of adequate data collection that stems from hospitals basically monitoring themselves and self-reporting. They also point out insufficient funds for facilities to assist in complying with regulations and vulnerable patient needs.

While this video has sparked well-deserved outraged, many within healthcare circles are not surprised and feel that it's just part of doing business. They point out that we don't know all the facts, such as maybe she was unruly or harmful to others or maybe just attention seeking for the camera.

However, the saddest part of these comments is that two wrongs do not make a right. Despite her actions or lack thereof, she deserved better than to be put on the street in the middle of winter.

Although the facts of the patient's care needs are unclear, the patient clearly demonstrated some possible symptoms of mental illness or and/or cognitive deficits. Who would rationally be standing at a bus stop with little clothing on?

While hospitals are required to stabilize and treat, they are not necessarily required to cure all of a patient's problems. Considering limited resources for mental health services, it is of no surprise that this population is exceptionally vulnerable to patient dumping — again, shedding light on just another facet of a complex issue.

Even though all the facts of this story may never be completely known, hopefully this story does cause us to pause and remember that healthcare is human care. It needs to be delivered with compassion and caring or it fails from the start.