Valentine’s Day woes? There’s an ICD-10 code for that 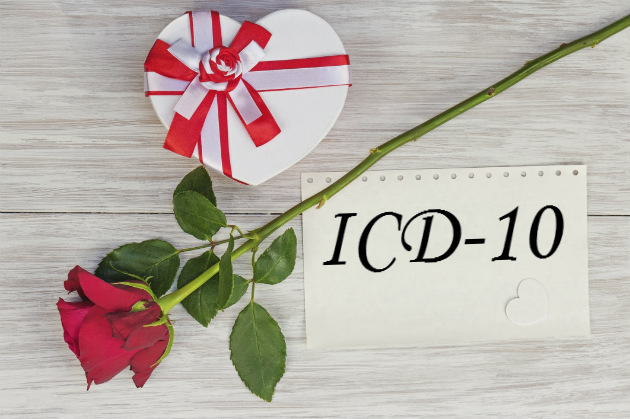 If you've done any shopping lately, you might have noticed the influx of pink and red decorations, the increase of candy displays and the uptick of jewelry commercials. Hallmark's favorite holiday is upon us.

Of course, no holiday is without unfortunate incidents — not even the lovey, dovey Valentine's Day. No matter what goes awry, though, trust that there's an ICD-10 code for it.

When love strikes, it takes the form of an arrow. Interestingly, ICD-10 has codes for assault with knives, daggers and pipe bombs, but no arrows. Thus, we must settle for "X99.8, Assault by other sharp object."

Remember the crazy flip-flopping of your stomach right before your first kiss? Those, my friends, are butterflies, and there's an ICD-10 code for that: "F06.4, Anxiety disorder due to known physiological condition."

One in five people have allergy or asthma symptoms, but that doesn't stop us from showing affection to our loved ones by presenting them with bouquets of flowers. They are so pretty, after all, even with all the sniffling and sneezing: "J30.1, allergic rhinitis due to pollen."

If life is like a box of chocolates, there is one thing you know you're going to get if you overindulge: "K30, functional dyspepsia," a.k.a. a bellyache.

Every rose has its thorn

Roses are arguably the most romantic flower, which is probably why they're so popular on Valentine's Day. Watch out for those thorns, though, because they'll get ya: "S61.230, Puncture wound without foreign body of right index finger without damage to nail."

From fancy dinners to grand romantic gestures, champagne is almost as common on Valentine's Day as it is on New Year's. But if you're not a skilled bottle popper, you could end up with a black eye: "T15.91XA, Foreign body on external eye, part unspecified, right eye, initial encounter."

So many Hollywood romance scenes feature rooms filled with ceremoniously-positioned, lit candles. But who is lighting all of them? And isn't it time consuming? I recommend a stick lighter for that job or else you're bound to burn your fingers on the matches: "T23.011A, Burn of unspecified degree of right thumb (nail), initial encounter" and "23.12, Burn of first degree of single finger (nail) except thumb."

TRUE LOVE down the wrong tube

Sweethearts, or conversation hearts, are those adorable, yet not-so-appetizingly chalky candies with cutesy sayings like "BE MINE" and "TRUE LOVE" stamped on them. We don't necessarily like eating them, but it's the novelty of it. Unfortunately, they're easy to choke on: "T17.220A, Food in pharynx causing asphyxiation, initial encounter."

Have you ever seen so many cards on display? From funny to grandiose, there's a variety of Valentine's Day cards to choose from, and you absolutely must find the right one — one that says everything you wish you were talented enough to think of on your own. In the process of flipping through your choices, your soft skin could fall victim to a pesky paper cut: "W45.1, paper entering through skin."

During an episode of Grey's Anatomy, I learned about broken heart syndrome. After some research, I discovered it's an actual condition, one that mimics heart attack symptoms and is induced by emotional distress. Valentine's Day is certainly a day of romance, but — cue the Debbie Downer music — it can also be a day of heartache: "I51.81, Takotsubo syndrome."

Have an example of a Valentine's Day gone wrong? Share it with ICD-10 codes in the comments below.