Travel2020: Struck by the travel curse 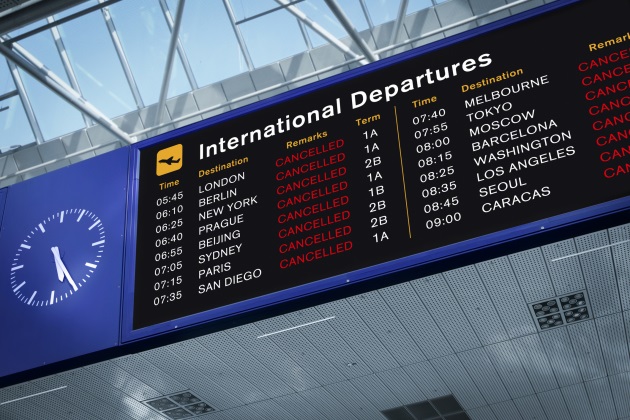 Sweaty palms at the airport? Has the light, now heavy, snow shower grounded your flight … again? If so, you may be one of the 1 in 7 Americans that feel they’ve been struck by the "travel curse."

A new study looking at the travel experiences of some 2,000 Americans determined that 14 percent seem to experience so much bad luck when they travel that they believe themselves to be truly cursed. And it seems once it strikes, the curse just keeps on cursing, at least according to nearly three-quarters of those who feel they caught the travel hex.

The study, conducted by OnePoll and UpgradedPoints.com, also found that the average American, according to the poll, experiences 240 stressful travel moments in a lifetime.

Not surprisingly, given the surge of travel demand and the chaos of things that can and do go wrong at airports, 47 percent of those surveyed found traveling to be a stressful experience — 27 percent said travel was extremely stressful. A little over a quarter of the respondents admitted they often expect something to go wrong when they travel, and half of those respondents usually prepare themselves for the worst-case scenario.

What are these incidents that are causing travel nightmares in these vulnerable population subsets? Flight delays came out on top for 45 percent of the travelers polled. Another 34 percent blamed themselves for their travel troubles, whether due to forgetting something, leaving too late or missing details about the flight in their preparation.

But being on the flight can be as stressful as missing it for many passengers. Noisy seatmates, crying babies — these circumstances add up to … the travel curse for many frequent flyers.

Losing luggage (24 percent), a canceled flight (22 percent), extreme turbulence (22 percent), even getting a flat tire (22 percent) are all elements that bring on stress during travel and send people, if only in their minds, heading to the exorcist.

The survey indicated that one in five Americans has, at some point during a cursed travel episode, canceled the trip and stayed home. Most people (76 percent) hold that traveling with someone else helps ease the pain of traveling and, for 55 percent of travelers, free food and snacks are excellent stress busters, as are headphones, pillows and a good book.

The curse of frequent flying

Another survey taken by Booking.com that involved some 4,500 business travelers across eight countries found a whopping 93 percent admitted experiences of stress at some point on their journey.

A combination of pre-travel planning, booking accommodations, arranging transport, managing expenses and receipts, and navigating the destination — combined with a lack of sleep — has the potential to leave business travelers weary and strained.

That’s all before the important meetings and actual work have even begun. Top stressors, according to Booking.com, include:

Angst at the airport

One in 3 said missing their flight is their biggest concern. As would be expected, jet lag (42 percent) and airport security queues (26 percent) are also disliked.

Touching down in a foreign destination can feel exciting and adventurous for those on vacation but for business travelers, it can be a different story. The research shows that worries don’t end at the airport, with 1 in 4 feeling anxious about language barriers when they reach their destination, and 1 in 5 feeling uneasy about being in unfamiliar surroundings, and cultural norms and differences (13 percent).

In addition, more than one-third say one of their least favorite things is being away from family or friends. Men (40 percent) are slightly more likely than women (34 percent) to feel this way.

Cures for the travel curse

A little pre-travel planning can work like garlic against vampires when it comes to warding off the travel curse. According to Psychology Today columnist Dr. Alice Boyes, these tips can keep travelers on their feet and heading to their destination no matter what the travel devil has in store.

Don’t rely on your memory when preparing and packing. Externalize this task by making a list. Or a few lists: what to pack, what to do to prepare the house, what to do in the destination.

Pre-pack before you pack. Find an empty box and during the week prior to departure, think of items you want to pack and throw those items into the box. It’s a simple act that cuts packing time later. Keep the receptacle open for changes you want to make as you go and keep in a high-traffic area of your home.

Plan for the worst, and enjoy the peace. Lots of things happen at the last and worst minute. Emergency assignments and projects, urgent favors, people you depend on running late, people you are traveling with getting hungry, thirsty, grumpy.

Prepare for these moments with snacks, waters, 20-minute warnings and the ability to say “no.” Consider telling friends and colleagues you are leaving a day earlier and consider a Saturday, rather than Sunday, return.

Visualize your travel day. See the trip to the airport, the security line, the flight and your seat mates. Anticipate all the little bits and pieces you need to do. This includes putting your passport in your purse or case, curating your credit cards and making sure your driver’s license is in a place that can be located.

Check the maps before you depart. It’s easy to misjudge distances in time while you are running from one destination to another. Plug the route plan into Google Maps before you leave to help the trip go smoothly.

Know your options and rights in the face of a flight delay. A general guideline is to reach out to the airline by as many channels as possible: Twitter, phone, airport customer service agents. Look up alternative flights available from a smartphone app and tell the agent.

Your credit card may provide travel delay protections if you follow their rules — it’s a good thing to know the terms and confirm those benefits in advance, especially on risky routes.

Pick secure flights. Not all flights are risk prone and but some are very problematic. A quick Google search will reveal the flight stats for the flight number you’re considering and it may be worth a change, even if that means a small difference in the fare, to avoid delay- and cancellation-prone flights.

If there is a young child in tow on a long flight, an overnight flight will be preferable. Some airlines have family-friendly boarding and seating policies, which can help allay unnecessary stress.

Bring a treat. It may be a book or a favorite sandwich or a movie downloaded to an iPad. Bring some element of joy you can link to your travel time.

Look up. Travel can be fun. Most of the time, travel will actually be enjoyable and go smoothly. Traveling is a time to think, reflect, sit back, dream — all unfettered by the guilt of having to do something urgent at that minute or having to be somewhere else. You are right where you need to be. Go with the flow. It may be better for your nerves than you think.