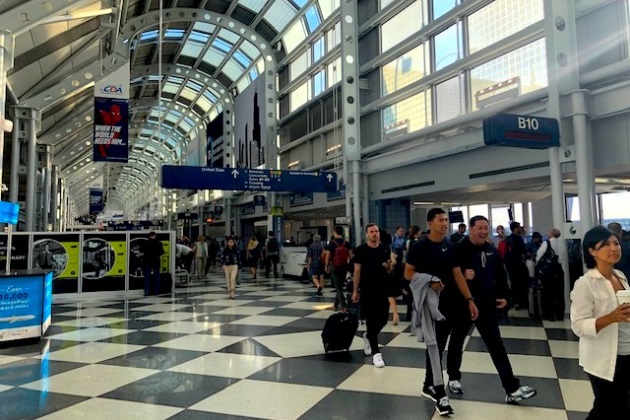 That innocuous two-hour aircraft maintenance interruption may seem like a minor inconvenience, but if added together with all the other interruptions per passenger at an airport in a given year, the delays can add up to thousands of years.

A new study by FinanceBuzz examined the top 25 airports in the U.S. where passengers are most delayed. Not surprisingly, Chicago O'Hare International Airport (ORD), hometown hub of United Airlines and where the legacy carrier runs more flights than any competitor, the topped the list.

The report analyzed data from the U.S. Department of Transportation, including total passengers departing from each airport, percentage of flights delayed, and the average length of each delay. The accumulated hours added up to more than time lost.

Rather, the findings were best interpreted in measures of years. Thus, in 2018 alone, delays at Chicago O'Hare International Airport amounted to 1,133 years lost — in time travel, that would take a passenger back to the sailings of pilgrims across the ocean to settle the east coast swamps of the New World.

In a deeper drill down, there were 33,152,904 passengers who departed from ORD last year. Some 25% of flights from the airport were delayed or cancelled so 25% of those 33 million passengers — or 8,288,226 million people — were affected by delays at just this one airport last year.

The average delay at ORD was 71.85 minutes, making the collective time passengers were delayed 595,509,038 minutes or 1,133 years. Atlanta came next on the list with a collective delay time of 991 years. Further findings revealed these delays were not about weather, which might be assumed. However, weather delays accounted for just 4% of delays. Infrastructure and operations were more often noted as the dominating cause of flight delays.

Carrier delays, where "the cause of the cancellation or delay was due to circumstances within the airline's control (e.g. maintenance or crew problems, aircraft cleaning, baggage loading, fueling, etc.)," also account for a high percentage of delays across airports.

According to the latest "value of travel time savings" published by the Department of Transportation, the monetary value of this time lost while traveling adds up significantly as the report deems the per-person cost of an hour of personal travel by air is $33.20.

In a separate note, the U.S. Transportation Secretary Elaine L. Chao recently announced a $478 million infusion in airport infrastructure grants to 232 airports in 43 states. This is the fourth allotment of the total of $3.18 billion in Federal Aviation Administration (FAA) Airport Improvement Program (AIP) funding for airports across the United States.

Selected projects include runway reconstruction and rehabilitation; construction of firefighting facilities; and the maintenance of taxiways, aprons, and terminals. The construction and equipment supported by this funding increase the airports’ safety, emergency response capabilities, and capacity; and could support further economic growth and development within each airport’s region.