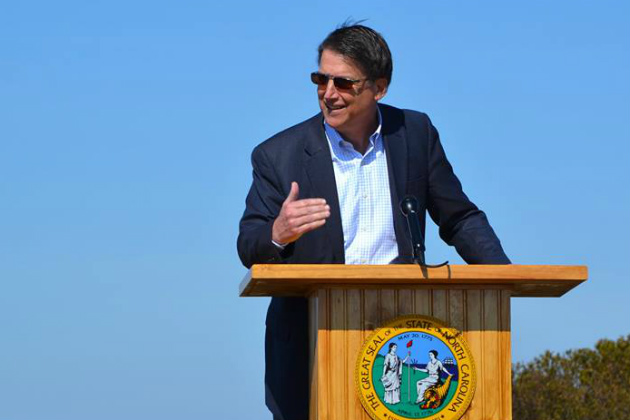 The U.S. Justice Department gave North Carolina a Monday deadline to repeal or stop enforcement of the state's controversial "bathroom" law — HB2. In response, North Carolina announced Monday morning that it has filed a lawsuit against the federal government.

The Justice Department wasted little time firing right back Monday afternoon with its own lawsuit against the state. The DOJ lawsuit states North Carolina is violating Title VII of the Civil Rights Act, Title IX and the Violence Against Women Reauthorization Act.

House Bill 2 (HB2) was signed into law March 24 by Gov. Pat McCrory. The law bans transgender individuals from using the bathroom that fits their gender identity.

"The Obama administration is bypassing Congress by attempting to rewrite the law and set restroom policies for public and private employers across the country, not just North Carolina. This is now a national issue that applies to every state, and it needs to be resolved at the federal level," said North Carolina Governor Pat McCrory said in a prepared statement Monday.

"They are now telling every government agency and every company that employs more than 15 people that men should be allowed to use a women's locker room, restroom or shower facility."

"This is about the dignity and respect that we accord our fellow citizens and the laws we have enacted as a country to protect them and to protect us," Lynch said in a news conference Monday.

The state's defiant move may jeopardize federal funding for education in the future, but the law's most immediate damage has been in the tourism industry as visitors, celebrities and businesses are canceling any interaction with North Carolina in protest of LGBT rights.

Since the signing of HB2, many in the tourism industry have seen an increase of lost business, which is effecting local area economies.

The Greater Raleigh Convention and Visitors Bureau recently reported a $2.4 million economic loss because of the law. More than $700,000 came in a week after groups canceled plans to hold events in the area.

"HB2 is certainly beginning to have a negative impact on the conventions and sports business in Wake County," Dennis Edwards, president and CEO for the Greater Raleigh Convention and Visitors Bureau, told The News & Observer.

Raleigh is not the only North Carolina city feeling the effect of HB2.

In Charlotte, more than 20 conventions have canceled or are no longer considering convening events in the state because of the discrimination HB2 has on the transgender community. This has resulted in a $2.5 million loss of revenue for the city.

"We are extremely concerned about the state legislation in place as we continue to hear negative feedback and potential event cancellations from our customers," said Charlotte Regional Visitors Authority CEO Tom Murray in a statement. "This issue is in danger of setting us back from the progress we've made in positioning Charlotte as an attractive, inclusive destination."

Last year tourism in North Carolina hit a record $21.9 billion — a 2.7 percent increase from $21.3 billion in 2014 — as almost 50 million people from across the country visited the state. Jobs in the North Carolina tourism industry increased to 211,400, according to research by the U.S. Travel Association for Visit North Carolina.

While North Carolina tourism continues to take hits, cities are continuing to promote tourism, but with a positive message: acceptance.

Asheville has loss about $2 million in tourism since HB2 has been implemented, but the city recently released a new tourism video promoting diversity and acceptance in its city.

"We like to think that everybody knows Asheville and understands the kind of diversity and self-expression and acceptance of all kinds of people that our community really believes in. But not everybody has been here before. So we're helping to underscore those core values, and make sure that people know they will be welcome when they come to Asheville," Stephanie Brown, Executive Director for the Asheville Convention and Visitors Bureau, said in a statement.

Many cities across the country including New York City, San Francisco, Washington D.C., and Atlanta are banning their employees to travel to the state in boycott of the anti-LGBT law.

Concert goers are also feeling the effect of the HB2 law as artists are canceling performances across the state. Musicians such as Pearl Jam, Bruce Springsteen, Nick Jonas and Demi Lovato have all canceled concerts in support of LGBT rights.

"Right now, there are many groups, businesses and individuals in North Carolina working to oppose and overcome these negative developments," Springsteen said in a statement. "Taking all of this into account, I feel that this is a time for me and the band to show solidarity for those freedom fighters. As a result, and with deepest apologies to our dedicated fans in Greensboro, we have canceled our show scheduled for Sunday, April 10th.

"Some things are more important than a rock show, and this fight against prejudice and bigotry — which is happening as I write — is one of them."

North Carolina isn't the only state facing backlash from its stance on the LGBT community. Mississippi is also receiving scrutiny after the state passed a religious freedom bill in early April.

HB 1523, which goes into effect July 1, would allow religious organizations to deny LGBT people from weddings, adoption, foster care services, employment and renting or buying property because of their religious belief or moral conviction.

While Mississippi isn't getting as much backlash as North Carolina with this new law, those in the tourism industry are speaking out against the law.

"Our members statewide are reporting calls, emails and social media posts from people canceling or postponing trips to Mississippi due to national media reporting on this new law," said the Mississippi Tourism Association. "As the industry on the front line, cheerfully welcoming visitors to our home, we are redoubling our efforts to demonstrate that Mississippi is indeed the Hospitality State."

The Mississippi Hospitality & Restaurant Association has created a campaign called "Everyone's Welcome Here" in response to the new law.

"When HB 1523 was signed, Mississippi was thrust into the national spotlight," Mississippi Hospitality & Restaurant Association Executive Director Mike Cashion said in a statement. "Regardless of its intent, this legislation has created a level of controversy and public perception that affects the image of our state and the hospitality community. And while we may not be able to manage the image and brand of the entire state, we can affect the image of our restaurants, hotels and other hospitality businesses."

MHRA will design, print and distribute door decals to restaurant and hospitality-related businesses with the message "Everyone's Welcome Here."

"Our industry serves a diverse customer base and we want to make sure all customers are appreciated and welcomed. We have a very clear and strong message to convey," he said. "Mississippi's restaurant industry is open for everyone's business."

One of Mississippi's biggest employers MGM Resorts, which provides jobs for approximately 4,400 people in the state, also spoke against the bill and the damage Mississippi tourism could take.

"We respect the diversity of our employees, our guests and the people in our communities," an MGM Resorts spokeswoman said in an email statement to CBS News. "Laws that permit businesses to decline to provide services to individuals because of this diversity will result in discrimination, decreased tourism and harm to the state's economy."

"The U.S. is an extremely diverse society, and attitudes towards LGBT people differ hugely across the country," the U.K. Foreign Office website said. "LGBT travelers may be affected by legislation passed recently in the states of North Carolina and Mississippi."

As LGBT rights continue to remain in the spotlight and as supporters fend off various anti-LGBT laws, the travel industry is standing up to welcome all those who come to visit.