To love or to hate Chinese tourists 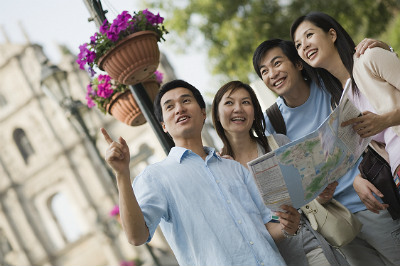 What would it look like if thousands of Chinese tourists showed up in your neighborhood at one time? No way? Actually, it's a "Chinese" way, and it just happened in Southern California a couple weeks ago.

According to the U.S. site of China Daily, Los Angeles and San Diego just hosted a record number of nearly 7,000 Chinese tourists in one group. They only stayed for one week within Southern California, but they took 86 flights, occupied 26 hotels and spent $10,000 per person. Add that up and the area collected about $70 million in just one week.

Today, China has become the number one source of international travelers in California. The state is expected to see a 63 percent increase in the number of Chinese tourists from 2013 to 2016. Moreover, these Chinese are budgeted to spend $2.2 billion in shopping, touring and transportation in California.

There is no doubt that China has "wowed" the world with numbers and cash. As an American Chinese who grew up in Mainland China, I certainly feel proud of the country's economic achievements. But as a strategist in hospitality and tourism, I am concerned about the possible negative effect on tourist destinations created by the "uncontrollable" demands from Chinese tourists.

Hong Kong, for example, began the Individual Visit Scheme for Mainland Chinese in 2003, with an effort to help Hong Kong recover from the SARS outbreak (before that, only business visas or visas for group tours were issued to Mainland Chinese). In the short term, such new visa arrangement seemed helpful, but I soon heard many complaints about Chinese tourists.

First, local residents felt they had to compete with Chinese tourists in getting on buses and trains during rush hours. Then, many local families said they had to fight with pregnant women from Mainland China for hospitality beds.

Later, the local residents had to outbid those rich Mainland Chinese when buying new homes. When waves of food safety issues emerged in Mainland China, they had to once again fight with the Mainland Chinese for baby formula and other food.

The list can go on, but in summary, there appears to be a big conflict that needs immediate solutions.

The last straw was probably the toddler-urinating case that just took place in April 2014. A young couple from Mainland China was caught on tape when they were helping their toddler relieve himself on a busy street in Mong Kok.

The news triggered more Hong Kong residents to protest against the Chinese tourists and a threatening statement from quite a few Mainland Chinese, suggesting they would go urinating on the streets of Hong Kong together.

I was just in Hong Kong in the middle of May, and I was glad I did not experience or witness any outrageous behaviors from either side. Nevertheless, I can understand why people want to be "left alone" in their daily lives.

Why do people seem to love and hate Chinese tourists at the same time? How can Chinese tourists win the hearts from other tourist destinations? Will it help by controlling either the supply or demand of the market? How about education? Can education help different stakeholders understand one another better?