The future is now: 3-D printers are poised to disrupt the economy 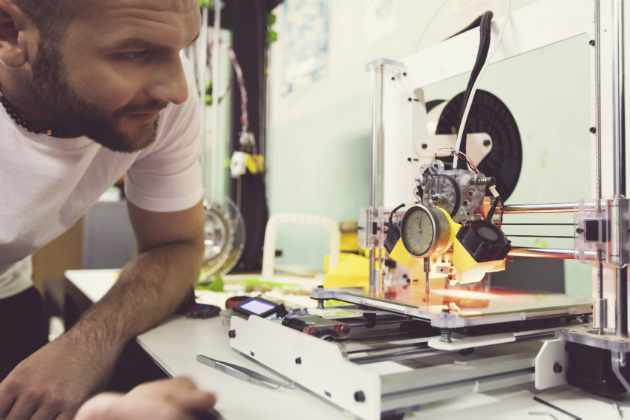 It's Monday morning. Your alarm goes off, and you slowly spill out of bed. You shuffle along to the kitchen and pour a fresh cup of coffee in your favorite mug — all set to start a new work week.

But as you reach for some sweetener to add in, your arm knocks the mug off the counter, shattering it on the floor. How do you replace it?

Not long ago, the only solution would be to go back to the store where you bought it and hope they have another one. That mug from your vacation eight years ago is out of stock? You're out of luck.

Today, you can search online at any number of retail websites — type "coffee mug" into Amazon, and you get 4.6 million results — but you still have to wait at least a couple of days for it to be delivered.

Ten years from now, you may simply fire up your 3-D printer, download an electronic file and make a new coffee mug in your home.

While this may seem like a simple transition in the delivery of a product, 3-D printing (aka additive manufacturing) is actually poised to create a tectonic shift in the manufacturing and retail industries in the near future.

We're already seeing an expansion in materials from plastics to metals, ceramics and even human tissue. And the effect is being felt in industries that require unique parts and customization like healthcare, military, automotive and aerospace.


But it won't be long before the effects are felt on a broad scale, according to several experts who spoke with MultiBriefs Exclusive. The global 3-D printing market was worth $2.89 billion in 2014, and it's expected to reach $12.53 billion by 2022 — an astounding annual growth rate of 20.1 percent.

As author John Hornick explains in his new book, "3D Printing Will Rock the World," 3-D printing has the ability to "break the grip of centralized manufacturing."

"As 3-D printers become more and more capable of making almost any finished product, centralized mass production may no longer be needed and, as a business model, may become a dinosaur," Hornick said.

How does that translate to the U.S. economy? We've already witnessed 20 years of disappearing manufacturing jobs — 4.5 million gone since the North American Free Trade Act took effect in 1994 — that have been lost to a combination of offshoring and technological improvements like automation. As FiveThirtyEight recently illustrated, these jobs are never coming back.

Will 3-D printers be the final nail in the coffin for U.S. manufacturing? Not exactly, according to those who work in the field.

"Every item 'Made in China' has a large percentage of its cost determined by shipping rates and the cost of money from the time an order is placed until it arrives at the customer," says Miles Szczurek, co-owner of a 3-D printer supply company in Illinois called AMX3d. "These costs disappear overnight."

The expansion of 3-D printing reduces the need for cheap labor in developing countries. This may actually lead to the reshoring of some manufacturing jobs — just in a different form. Instead of production-line workers, the market will look for technical experts who can operate a 3-D printer and navigate CAD/CAM files. That will require a new generation of schooling and training.

"It will be like deploying word processors in the 1980s when we had to train a generation of office workers," said David Alan Grier, an associate professor at the Center for International Science & Technology Policy and the past president of the IEEE Computer Society.

So who gets hurt in this new economy? The biggest loser appears to be the global logistics industry — warehousing and shipping.

Smaller regional "minifactories" spread throughout the country means the need for giant warehouses near large manufacturing plants will be eliminated. And with more production reshoring, the need for overseas shipping will also be reduced.

"I see manufacturing moving into offices with little prior interest in manufacturing because the systems capture the skill that they need to make new parts," Grier said.

How much longer will it take before those minifactories become personal factories in the form of 3-D printers in the home?

But it may not be the technology that will keep 3-D printing out of homes; it may be the law.

As it stands now, there would be nothing to stop you from purchasing an electronic coffee mug file, downloading it and producing 1,000 mugs and selling them for profit. You could also legally alter the file and tweak a part of it to avoid any kind of copyright infringement. There's even a project for a 3-D printer that can produce its own parts, thus replicating itself.

"First and foremost, what is needed is intellectual property legislation and the appropriate technology to protect 3-D models and ensure royalties for duplication," Szczurek said.

Much like the growing pains the music industry endured with the proliferation of electronic media, the 3-D printing industry will need to determine how to approach these legal issues before they grow out of control.

Until then, you may not be able to print your own coffee mug, but you may be able to head to a shop down the street and watch it being printed in front of you in the next few years.

"3-D printing will not change consumption, but it will definitely change how and where items are manufactured," Szczurek said. "The biggest challenge to existing manufacturers is remaining competitive and adapting while changes occur — which represents an opportunity for everyone else."