The big bump: The airlines likely to oversell and what passengers should know 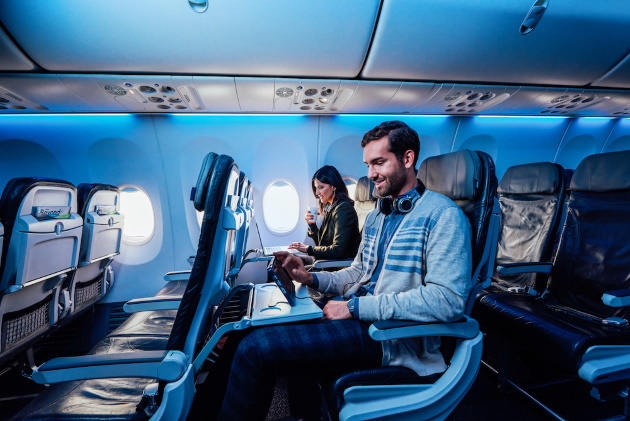 Bumps happen. In this case, we’re addressing the airline kind that often leave passengers scratching their heads over voluntary rebooking — which may bring points, money or free flights in exchange for surrendering a seat. But we are also looking at involuntary bumps — such as the forced removal of a passenger in 2017 from a United Airlines Express flight out of Chicago.

Time has not quite erased the memory of Dr. David Dao being pulled from his assigned spot on the plane and dragged through the aisle by police as he screamed in protestation. In such cases, if your seat number comes up, clearly you have drawn the short straw in a random game of musical airplane chairs.

These cases are more common than one would think — and are on the uptick. Some 13,000 passengers were bumped in the first six months of this year; that's more than all of 2018, according to numbers from the U.S. Department of Transportation.

And while getting bumped from a flight is always a risk for flyers, some airlines are better at managing their passenger loads than others.

In a recent study, Upgraded Points explored the airlines most likely to bump passengers from flights: a process the industry calls involuntary denied boarding (IDB), or airline bumps. Using solid industry data from 2018, and in light of the effects of the Boeing 737 MAX Aircraft grounding controversy, the final results were a bit surprising.

The study looked at current data released by the Bureau of Transportation Statistics, which keeps detailed airline-related statistics on a variety of topics for each full year. It examined the year-over-year changes in both voluntary and involuntary denied boardings (IDBs) from the top U.S. airlines to see which have the highest number of bumped passengers.

These numbers represent the number of IDBs per 100,000 passengers, per airline. Some results from the study are included below.

Airlines Most Likely to Bump Passengers

Just looking at the raw number of passengers bumped is not always the most accurate way to calculate which airline is more likely to bump its passengers. For instance, although American Airlines and Southwest Airlines have the highest number of actual bumped passengers, their volume of enplaned passengers is rather high altogether. This then places passengers' overall changes of being bumped by American and Southwest as statistically low.

Only 1.95 American Airlines passengers were bumped for every 100,000 who traveled in 2018. Southwest bumped only 1.5 passengers during the same time period. In contrast, Spirit Airlines had the highest number of IDBs based on raw data, but due to their higher volume of passengers, their ratio of bumped passengers is still better than other carriers, such as Frontier Airlines.

The highest IDBs based on passengers bumped and overall volume of passengers is Frontier Airlines, by a significant margin. Based on the data, Frontier bumped 6.28 passengers per 100,000.

Some of the raw data analyzed for the top four worst airlines for bumping passengers is below. Delta Airlines, however, holds the sweet spot with only 22 bumps in 2018. Out of over 138 million passengers, only .02 per 100,000 Delta passengers were involuntarily bumped.

Those airlines that are the least likely to inconvenience passengers with IDBs are also explored in the study. 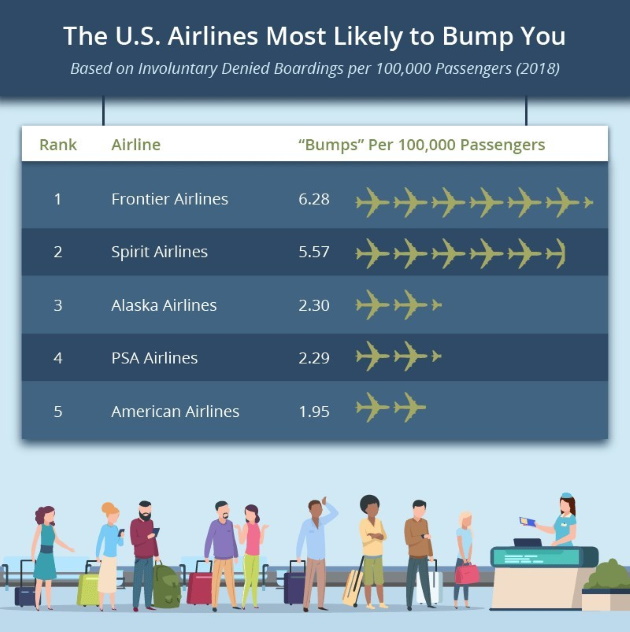 Generally speaking, though getting bumped is becoming less common for airlines. Rates peaked in 2016 and early 2017, though there was a significant drop in late 2017. With the grounding of the Boeing 737 Max aircrafts in March2019, however, there was a great influx of overbooking that resulted in an almost twofold rate of bumps in the first half of 2019.

PSA Airlines and Mesa Airlines were the U.S. airlines hardest hit by the grounding of Boeing 737 Max Aircrafts. In both cases, their Q1-2 bump rates shot up by over 1,000 percent and resulted in over 10 people bumped per 100,000 passengers.

Close behind were Allegiant Air and American Airlines, both of which experienced a bump rate increase of over 50%.

However, not every airline was negatively impacted. United, Frontier, Alaska, and Spirit Airlines all experienced a drop in involuntary denied boardings since Boeing 737 Max aircrafts were grounded. 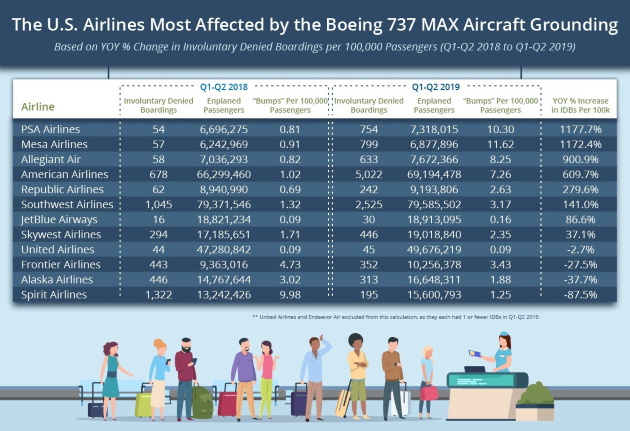 These airlines appeared to either not be affected by the grounding of those aircrafts or they were able to quickly compensate for the additional passengers that booked tickets on their airlines.

The U.S. DOT allows for the overselling of airline seats in the U.S. to accommodate for the “no-show” algorithm that affects the seat yield. This is the root cause of most bump events. But travelers do have some wiggle room in the transaction.

If an airline offers a reduced rate ticket, free ticket, or voucher to passengers in exchange for volunteering to fly on a different flight, the airline must tell passengers about any and all restrictions that may apply before passengers make their decision. They should know how long that ticket or voucher will last, whether it can be used during high-traffic holidays and whether it can be used for an international flight.

If the bump comes with a promise of a seat on the next flight, passengers should ask about which the airline and whether that seat is confirmed or standby.

If the next plane is some hours away, passengers should find out whether the airline is willing to provide for otherwise out-of-pocket expenses such as meals, transfers, hotel rooms and phone cards.

If there are more ticketed passengers than seats to go around, and not enough flexible flyers, passengers may be denied boarding due to a range of contributing criteria: check-in time, fare paid by the passenger, even a passenger’s frequent flyer status.

And while the DOT requires airlines to give all passengers who are bumped involuntarily a written statement describing reasons and passenger rights, there are many situations in which these unlucky passengers are not entitled to compensation.

Aircraft Change: When a smaller plane is substituted for the larger one or using a different and smaller aircraft due to operational or safety reasons.

Weight and Balance: Weight or balance restrictions may be a consideration for operational or safety reasons with planes containing 60 or fewer seats.

Downgrading: When a passenger is downgraded from a higher class of seating to a lower class, the only compensation the airline is obligated to supply is a refund for the difference in price.

Charter Flights: Flights contracted for a specific trip that is not included in policies and regulations that guide scheduled airlines.

Small Aircraft: Compensation is not required for scheduled flights on planes holding fewer than 30 passengers.

Departing a Foreign Location: International flights to the United States will not be subject to the same rules and regulations that govern U.S. network flights. However, some airlines on these routes may provide compensation voluntarily. As a case and point, the European Commission has its own policies surrounding flights departing from a European Union member state.

But passengers may be taken off a plane for many reasons, often of their own making, and in these incidents, the airline does not owe the passenger compensation or service. These happenings are common — often fodder for YouTube and social media moments — and include flying under the influence of alcohol or drugs, attempting to interfere with duties of the flight crew, engaging in unruly behavior affecting other passengers or flight operations, and having an offensive odor not due to a disability or illness.

In situations when bumped passengers opt to be bumped, they are eligible compensation under these conditions:

Passengers who are denied boarding involuntarily due to oversells are usually entitled to compensation that is based on the price of their ticket, the length of time that they are delayed, and whether their flight is a domestic flight or an international flight leaving from the United States.

According to the DOT, this means most bumped passengers who experience short delays on flights will receive compensation equal to double the one-way price of the flight they were bumped from, up to $675. Passengers experiencing longer delays on flights will receive payments of four times the one-way value of the flight they are surrendering, up to $1,350.

Payments are usually offered at the airport on the spot or within 24 hours of the bumping incident.

Here’s the good news: In incidents where compensation is warranted, it is up to the passenger to his or her own negotiator. There is no limit on how much a passenger can collect from the airline. Although airlines are required to give a certain amount of money by law, the companies are free to give larger amounts, as needed, to get the job done.