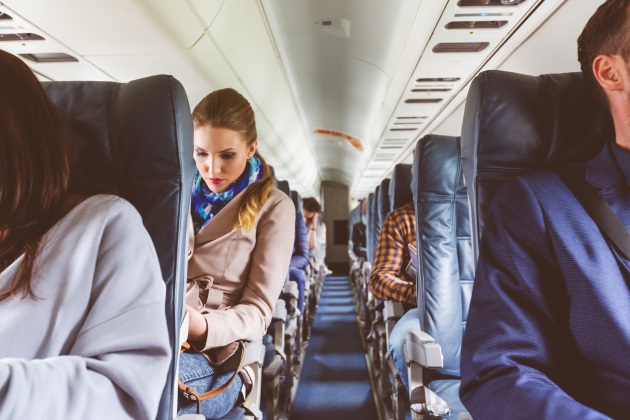 A new study is telling us that airplanes are incredibly disgusting and that travelers need to avoid certain things at all costs. Most importantly, avoid onboard water, except that which is from a sealed water bottle.

Don't wash your hands with it, and certainly don't drink it. That’s according to the 2019 Airline Water Study.

Developed by DietDetective.com and the Hunter College NYC Food Policy Center, the study tested the quality of water on 11 major airlines and 12 regional airlines. But water isn't the only thing to make the weary wanderer even more, well, weary.

The studied water was rated on a scale of zero to five, with scores of three and higher constituting water that is safe enough to drink. The zero-to-five scoring is assigned on 10 criteria, including the presence of coliform bacteria or E. coli.

If you fly Alaska Airlines or Allegiant, as of this study, you’re in the best shape regarding flying health, as the two airlines tied for first place. Spirit and JetBlue, however, ranked last. Nearly all regional airlines, except Piedmont, have poor Airline Water Health Scores and a number of federal code violations.

For example, when an aircraft's water sample tests positive for coliform, the federal government requires that the water be tested again to determine if E. coli is present. If E. coli is not present, the airline must take repeat samples within 24 hours, disinfect and flush the water system within 72 hours; or the airline can shut down the water system within 72 hours, then disinfect and flush.

If the sample is E. coli-positive, the airline must shut off public access to the water system within 24 hours and disinfect and flush. It’s not an easy process.

Perhaps the most shocking thing to come from the study is the researchers’ recommendations about what not to do with the water on the worst of the airlines measured. Other than recommending that people not wash their hands in the airplane bathrooms, they encourage travelers to skip the coffee or tea onboard; and that travelers should never drink water unless it's known to have come from a sealed bottle.

Spirit, Allegiant, and Frontier did not respond to any questions from surveyors. "Very weak responses" — and responses that didn't address questions — were provided by American, United, and JetBlue, researchers said.

An aircraft flies to numerous destinations and may pump drinking water into its tanks from various sources at domestic and international locations. The water quality onboard also depends on the safety of the equipment used to transfer the water, such as water cabinets, trucks, carts, and hoses.

Oh, but there’s more to fear on an airplane than just the water. The aircraft are near-cesspools of germs and grime. Airplane restrooms are the worst places for germ contamination, according to a USA Today poll. According to Coverall Cleaning System, the bathrooms rarely are sanitized between flights. The tiny sinks make it hard to wash hands properly, and studies have found E. coli on almost every surface in the plane’s loo.

Outside the water closet, it might be a good idea to bring your own reading material along with you on the flight. Airline magazines and catalogs are also heavily contaminated. This is because people’s hands tend to naturally be dirty and the sinks in the restrooms don’t allow for proper handwashing (plus, the water isn’t fit for washing).

Finally, if attempting to navigate all these germ-ridden areas gets you exhausted, it’s probably a great idea not to reach for an airline pillow and blanket. About 5% of customers on a flight will have a cold or flu, according to USA Today, and many try sleeping it off while in the air. Pillows and blankets are not cleaned between flights, creating a potential risk for those boarding the plane.

As you gear up for holiday travel or a busy business season, know your airplane is one of the least healthy places you could be.