STEM education growing, but still has room for improvement 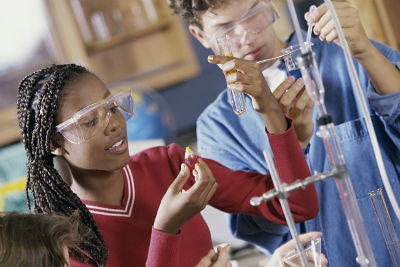 The revival of interest in STEM education started with the national Educate to Innovate campaign in 2009.

The campaign is designed to bring American students to competitive ranks with their international counterpart when it comes to the subjects of science, technology, engineering and mathematics. Educators, organizations and the federal government have all taken steps to spark interest in both STEM education and careers.

Five years later, the revival of STEM education is still in its infant steps, and it still has room to grow in both diversity and innovation.

According to the U.S. Department of Education, only 16 percent of high school students are proficient in mathematics and are interested in a STEM career.

The American Chemical Society has been one example of organizations looking to increase awareness of STEM education. In 2010, ACS created the Science Coaches program. The program is designed to team up their members (who are chemists) with science teachers from grades K-12 to create a deeper level of interest in science in students throughout the school year.

The program started off with approximately 32 chemists during the 2010-11 school year, but has evolved to about 168 chemists for the 2013-14 school year.

"I enjoy seeing the students, and their enthusiasm makes me more enthusiastic about my research," graduate research assistant Jessica Rubuck said about her involvement in the program. "I've also learned how to explain science in a different way."

For every partnership a school has with a chemist, the school receives a $500 donation from ACS.

According to a report by U.S. News and World Report, the number of high school students wanting to enter STEM careers dropped between 2009 and 2013. It was also reported that only 28 percent of women were in the science and engineering workforce in 2010. African Americans, Hispanics, American Indians and Alaska Natives only made up 10 percent of that workforce.

Recently, major technology companies such as Google have released their diversity reports. At Google, 30 percent of its workforce are women, and only 10 percent were nonwhite, non-Asian minorities. Of that, 17 percent of women were in technical roles within the company, and only 1 and 2 percent of African Americans and Hispanics were in those same roles, respectively.

Despite the numbers, Google has given more than $40 million toward improving STEM education for women and minorities. Other tech companies such as Yahoo and LinkedIn reported similar numbers when it comes to the diversity of their workforce.

Although the numbers are dismal, according to the U.S. Census Bureau, 27 percent of women have STEM careers. Of this, 6 percent of these workers are black and 7 percent are Hispanic.

For the 2015 budget, the White House wants to invest $2.9 billion — a 3.7 percent increase from 2014 — toward STEM education. The focus would be the goal of reaching the president's goal of 100,000 STEM teachers within the next decade, supporting more STEM-focused school districts and improving undergraduate STEM education.

On June 18, the White House hosted its first Maker Faire. Sponsored by Maker Media, it allows investors and innovators a chance to show off products for potential future endeavors.

"I call upon all Americans to observe this day with programs, ceremonies and activities that encourage a new generation of makers and manufacturers to share their talents and hone their skills," President Barack Obama said in a proclamation issued prior to the Maker Faire.