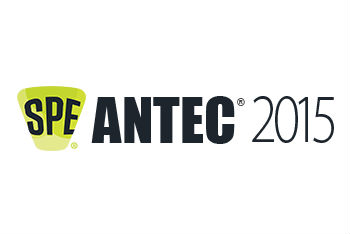 Note: This is the first article in an ongoing series covering the Society of Plastics Engineers (SPE) and its multifaceted global endeavors.

ANTEC, produced by the Society of Plastics Engineers, is the largest, most respected and most well-known technical conference in the plastics industry. Since its start in 1942, ANTEC has successfully expanded from the U.S. into Europe, India and the Middle East with further expansion to global locations in 2015 and beyond.

This year's meeting included the largest presentation of peer-reviewed technical papers about plastics in the world. More than 500 submissions were featured in sessions that ran all day from March 23-25 at the Orange County Convention Center in Orlando, Florida, set against the impressive backdrop of the triennial National Plastics Exposition (NPE) trade show.

Below is a chronological summary of the awards, sessions and events featured at SPE ANTEC 2015, with information directly from various SPE releases and webpages.

On March 22, the SPE recognized outstanding contributions to the plastics industry with their major 2015 Annual Awards that included the following distinguished recipients:

The SPE Business Management Award was given to Mr. Charles A. Sholtis of Plastics Molding Technology, Inc. He is the CEO of Plastic Molding Technology, Inc. (PMT), a Texas-based manufacturer of small, precision-engineered, injection-molded components used in a wide array of applications in diverse industries. Under Sholtis' leadership, PMT was named the Manufacturing Leadership Council's 2014 Manufacturer of the Year and was recognized for its industry-leading sustainability initiatives and operational excellence.

The SPE's Fred E. Schwab Education Award sponsored by the Detroit Section was awarded to Dr. Sarah E. Morgan of the University of Southern Mississippi. Morgan, after a 14-year career in industrial R&D, is a professor in the School of Polymers and High Performance Materials at The University of Southern Mississippi. Her expertise is in the area of polymer surfaces and interfaces. Morgan's research focuses on polymer surfaces and interfaces, involving bioinspired polymers and nanomaterials. She has been active in education and outreach at the undergraduate, graduate and K-12 grade level since joining the university.

The SPE's Research/Engineering Technology Award was presented to Dr. Sureshkumar D. Shah. Shah has 30 years of experience in the automotive industry with General Motors and Delphi (highest technical level "Senior Technical Fellow" in last position). In 1992, his idea of developing a single-piece plastics door module, significant part integration, replacing more than 50 metal pieces was an outstanding success in the automotive plastics industry. For this, he received more than seven prestigious awards worldwide. He has received the Gold Award as "Scientist of the Year" in Michigan by the Engineering Society of Detroit and received a Tribute from the Governor of Michigan.

Fellows of the Society

Also on March 22, SPE honored the five newest Fellows of the Society — members who have made outstanding contributions in plastics science, engineering or management. Candidates for the Fellows honor must be sponsored by an SPE division or special interest group.

The SPE Fellows Election Committee considers eligible candidates on the basis of a personal history as well as written sponsorships from two SPE members. Only 309 members, counting the newest inductees, have been elected Fellows since the honor was established in 1984. The new 2015 SPE Fellows are:

Len Czuba was nominated by the Medical Plastics Division. Czuba is president of Czuba Enterprises, Inc., a Chicago-based medical device product development consultancy. He works with clients to take products, especially medical devices, from concept to production. His primary focus is on the selection and processing of plastics and biomedical polymers used in medical devices.

Hani E. Naguib was nominated by the Thermoplastics Materials and Foams Division. Naguib is a professor at the University of Toronto and holds the Canada Research Chair in Smart and Multifunctional Materials. He is also the director of the Toronto Institute for Advanced Manufacturing. His expertise is in the area of manufacturing of emerging materials including: smart and active materials, macromolecules and composites, and bio-based materials.

Maureen T. F. Reitman was nominated by the Medical Plastics Division. Reitman is a corporate vice president, principal engineer and the director of Exponent's Polymer Science & Materials Chemistry Practice. She joined the 3M Company and then Exponent, a multidisciplinary scientific and engineering consulting firm. Her research focuses on polymer structure-property relationships and the effects of formulation, manufacturing and environment on performance.

Dr. Paul Andersen was nominated by the Extrusion Division. Anderson is a past president of the Society (2009-10), and served on the Executive Committee from 2004 to 2011, holding the additional positions of secretary and treasurer. Additionally, he has been an active member of the SPE Extrusion Division Board of Directors since 1990. Anderson has authored numerous ANTEC and TopCon technical papers, served as technical consultant for the SPE Twin-screw Extrusion educational video and wrote the chapter on Twin-screw Extrusion for the SPE Plastics Technician's Toolbox.

Dr. Brian Landes was nominated by the Engineering Properties and Structures Division for his long-time service to the division and to the Society. Landes has served the division in a variety of roles since 1997, including chair, councilor, TPC and TopCon technical chair. He has also served as divisions chair for the Society for two years. He is especially recognized for his passion for student activities, mentoring, teaching and networking. He has been active in Best Paper, Best Student Paper and Best Student Poster Award committees and judging since the late 1990s. He also volunteers with the Next Generation Advisory Board (NGAB) to implement new programs and opportunities for young professionals in the Society.

Dr. Prithu Mukhopadhyay was nominated by the Quebec (Canada) Section. Mukhopadhyay has had long involvement with SPE, and he has provided leadership to the Quebec Section as president and councilor and to the Plastics Pipe and Fittings SIG as the TPC. He was instrumental in the creation and growth of the Plastics in Building and Construction SIG. Mukhopadhyay is passionate about new plastics technologies and has been a member of the New Technology Committee (NTC) since 1998. His key contribution to SPE has been in providing guidance to the NTC, where he served as chair in 2005-2007. Mukhopadhyay helped to develop the ANTEC New Technology Forums since 2000; these forums now occupy a prominent place in the ANTEC programming and help to attract registrants to SPE's annual conferences.

Mark P. Wolverton was nominated by the Chicago Section and the Product Design and Development Division. Wolverton has made significant contributions through his service as an officer for both his section and his division. His success as section president and division treasurer is the result of reason, risk assessment and compliance. He develops and demonstrates the value of SPE to members, employers and students; contributing as an officer, moderator and speaker. Mark facilitates successful events in cooperation with divisions and other sections.

"The Role of Nanotechnology in Current and Future Space Missions" given by Michael A. Meador, Director of the National Nanotechnology Coordination Office (NNCO) in the White House Office of Science and Technology, NASA.

Nanoscale materials and devices have flown in space. Carbon nanotube augmented composites were used for electrostatic charge dissipation on engine covers and struts for the Juno mission. Aerogels have been used as thermal insulation for the batteries on Mars rovers and as a capture medium for comet dust particles in the Stardust mission. A CNT-based "electronic nose" sensor was flown on the International Space Station in 2007 and demonstrated as a trace gas sensor.

This presentation provided an overview of the NNI and some of its accomplishments. It also discussed future needs for nanotechnology in NASA and provided some examples of current nanotechnology R&D supported by NASA.

ARBURG has developed a new industrial additive manufacturing technology from the perspective of a machine manufacturer: ARBURG Plastic Freeforming (APF) and the freeformer. A new system is thus available that operates on the basis of standard plastic granulates without requiring a mould.

Taking 3-D CAD data as a starting point, one-off parts and small-volume batches can be efficiently manufactured in production quality. As with injection molding, the key to the patented process is the melting of standard plastic granulates.

The liquid melt is then used to produce tiny droplets, building up the part layer-by-layer as is typical with additive manufacturing. The price of standard plastic granulates is comparatively low and a wide variety of plastic materials are available (i.e., ABS, Polycarbonate, Nylon and TPE).

"Innovating within a Global Compliance Environment" given by speakers from UL, REACH (ECHA), PolyOne, FAA and the FDA.

Mission Possible (March 22): This annual event organized by SPE's Next Generation Advisory Board is a special session moderated by Students and Young Professionals in the plastics industry to discuss a specific topic of interest in a given year. This year's 2015 topic was an exercise on the creation of a professional society (i.e. the construction/modification of a society's founding bylaws and policies) with special consideration given to advancements in technology and its impact on society activity.

Fundamentals Forum (March 23): "Expertise and Experiences" presented by SPE Fellows of the Society.

The Plastics Race (March 24): Presented by SPE's Next Generation Advisory Board, this fun twist on the traditional scavenger hunt took place on the NPE trade show floor from 10 a.m.-4 p.m. Powered by a specially designed mobile application, this scavenger hunt tested the plastics knowledge of students and veteran industry professionals alike. Prizes were awarded for correctly answering the most questions within the given time frame.

Student Speed Interview Session (March 25): Organized by SPE's Next Generation Advisory Board this annual event continues to grow in popularity each year. It works by companies reserving a table in the session. Each company gives an introduction at the start of the session, and graduate and undergraduate students bring copies of their resumes and line up to interview with the companies that most closely match their interests. They introduce themselves at the company table during five-minute intervals, and move to the next table when the whistle blows. All of the submitted resumes are provided to the interviewing companies prior to the event.

The Plastics Institute of America (PIA) at the University of Massachusetts Lowell is a not-for-profit educational and research organization dedicated to providing service to the plastics industries since 1961. The PIA is led by Prof.-Dr. Aldo Crugnola (left), executive director; Prof.-Dr. Nick Schott (right), secretary and director of educational programs; and Dr. Donald Rosato, publications chairman.