Some communities are putting the brakes on factory farming 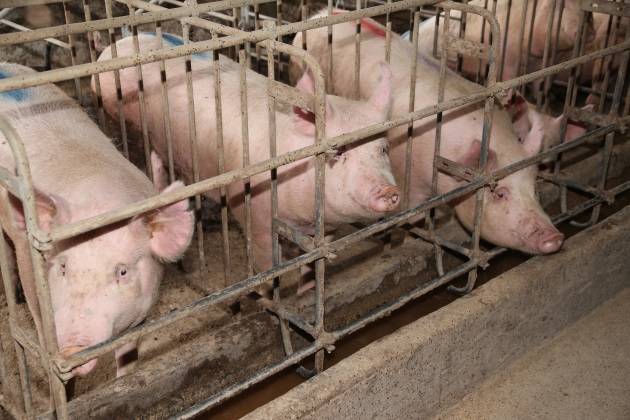 Wisconsin's Burnett County Board of Supervisors recently passed a one-year moratorium on large-scale farms with 1,000 or more animal units.

The moratorium is inspired by plans from Cumberland LLC, which earlier this year announced plans to build a $20 million farm for up to 26,000 hogs in the town of Trade Lake. The village on the central-western border of the state north of Minneapolis has fewer than 900 residents.

"Factory farm" is a term commonly used to describe an industrial facility that raises large numbers of farm animals. Animals such as pigs, chickens or cows are incredibly confined in these facilities, the American Society for the Prevention of Cruelty to Animals (ASPCA) says. Animals in these farms are kept in cages or crates or are crowded together in pens.

The county leadership committee now gets to wade through reams of data designed to show the effects of factory farms on local air quality, groundwater, and surface water — all vital to the health and longevity of the community.

Burnett County represents a microcosm of farming practices throughout the United States. The issue at hand is complicated for many. For example, a 2003 study found that living downwind from industrial hog operations reduced the property values of neighboring residential homes by about 10%.

There are currently about 20,000 factory farms in the U.S., according to data from the Environmental Protection Agency. From 2011 to 2017, the United States saw more than 1,400 new large-scale CAFOs established, a rise of 7.6%.

Iowa led the growth in animal confinements, adding nearly 2,000 CAFOs in the seven-year period, according to an analysis of data from the EPA's National Pollutant Discharge Elimination System. Delaware and Maryland were a distant second and third with 881 new operations between the two states. Delaware saw 600% growth and Maryland nearly 300% growth.

The most CAFOs lost, by percentage, were in Oklahoma, West Virginia, Arkansas, Illinois, and New York. While some of these states increased the production of some animals, they closed more operations from 2011 to 2017 than were opened.

Currently, factory farms raise 99% of U.S. farm animals, according to the ASPCA.

Factory farming is a significant contributor to water and air pollution, as well as deforestation. Factory-farmed animals produce more than 1 million tons of manure every day. The animal waste often contains undigested antibiotics given to the livestock. This waste is stored in massive open-air lagoons that are essentially lakes full of animal waste.

These lagoons can leak and spill, and have spilled over into other water bodies, contaminating them and killing their fish populations. The lagoons are emptied using a spraying system that applies the waste to nearby fields, which can contaminate water supplies, reach neighboring communities, and emit harmful gasses.

The nearly 10 billion land animals in the United States raised for dairy, meat, and eggs each year on factory farms account for 37% of all methane emissions. The U.S. Department of Agriculture estimates that confined farm animals generate more than 450 million tons of manure annually, three times more raw waste than created by Americans.

Corn, wheat, and rice, the crops on which humanity depends for survival, are among the most nitrogen hungry of all plants — most of which are raised for animal consumption.

Big brands, including Whole Foods, Aramark and Compass, are pushing back on such farming effort, too, committing to humane conditions for broiler chickens by 2024. Ten states are even banning excessive animal confinement in one form or another, with Massachusetts passing the most comprehensive bill yet.

Why? For some, it's because they are concerned about the conditions of the animals as consumers become more aware of how their food is raised.

For others, factory farms are known to cause an overwhelming number of adverse environmental impacts that can be devastating. Local governments, like Burnett County, are taking efforts to slow down factory farm development so they have time to study the potential impact.

Frederick Painter, a spokesman for the recently formed nonprofit corporation KnowCAFOs, said of the potential Trade Lake, Wisconsin, farm: "We are hoping that the moratorium and a rational ordinance will make them think twice about this area. It's not like we want them to go elsewhere, but we certainly don't want them here."