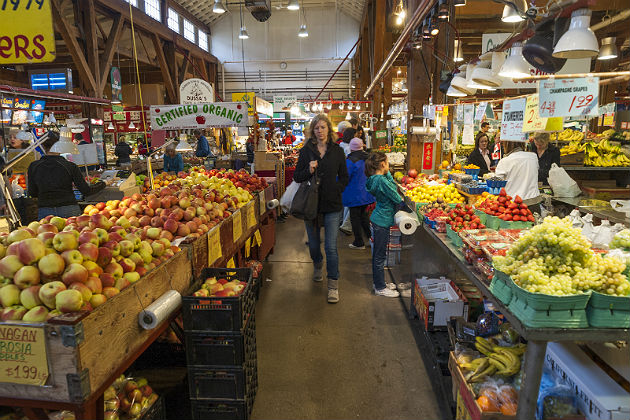 People can be seen shopping and selling produce at a farmers' market on Granville Island in Vancouver, B.C.

Food. It's not just simply something we consume daily to live. Food is a powerful connector among the members of a community, and allows them to be engaged with the source of their nutrition. It's a lifestyle. It's a thriving culture.

However, just as one bad apple may pose a threat to the whole bunch, this culture is not immune to certain risks. The latest being large food recalls due to listeria-contaminated products. Amy's Kitchen, Sabra and Blue Bell — just to name a few — have voluntarily recalled some, if not all, of their products since late March.

Listeria is a hardy bacteria that is resistant to extreme hot and cold temperatures. It causes an estimated 1,600 people in the U.S. to become ill each year. The good news is you can protect yourself by remembering to cook all meat to temperatures recommended by the USDA, wash raw vegetables and fruits, and eat leftovers within three to four days of preparation.

But is that enough of a peace of mind for consumers who want to trust they are getting the freshest foods?

Listeria isn't the only culprit. There are about 14 pathogens that cause a majority of food-borne illnesses — roughly 48 million cases occur each year, according to the Centers for Disease Control and Prevention.

If the food-borne illnesses aren't enough, consumers must also watch for foreign objects inside their food. Kraft recalled their original macaroni and cheese boxed dinners in mid-March due to possible metal pieces. And just recently, Trader Joe's recalled sweet apple chicken sausage due to a couple of consumers finding plastic parts inside the meat.

We're at a point in society where we realize many of our illnesses and some diseases are preventable. One way to do this is by eating well. How is this possible, though, with so many manufacturers recalling their food? How can consumers feel confident they are eating fresh and clean foods?

You cut out the middle man, and grow your own.

As consumers' desires continually grow for a food system with integrity, more and more people are looking to their local community for answers. Those who choose to raise and produce their own food are a part of a growing trend over the past 10 years.

"I think it's good for people like myself that we are close to our food," says Kacee Thacker, owner of The Penny Cow, a local farm that produces fresh raw milk and cheese in Kinnear, Wyoming. "That can help others get closer to their foods as well. The closer you get, the healthier it is."

According to a Packaged Facts National Consumer Survey, 53 percent of those who answered said they seek out locally grown and produced foods. Freshness is a key reason consumers go local.

Getting that fresh food from the farm to table has become easier, thanks to food hubs such as farmers' markets. With about 8,000 operating across the U.S., the market count has grown 35 percent since 2010.

When the people in a community can see that local food producers are completely invested in the quality of their products, they can believe in the integrity of those products. When people know their values are shared, this builds trust and demand. It all goes back to food being a powerful connector bringing communities together.

This trend is not only seen in rural communities, but urban as well. Urban farms have been popping up in cities everywhere, despite space limitations. One family living right outside of Los Angeles managed to turn their one-tenth of an acre into a sustainable farm that produces 6,000 pounds of food per year. Even those who find themselves living in a concrete jungle have found ways to cultivate fresh herbs and small animals — even bees — on their patios and rooftops.

Consumers want to know what's in their food and where it comes from. Community gardens and local farms are making this easier to manage amidst the myriad of food recalls in the news.

Still don't know what to think?

Seek out your local or nearby farmers' market the next time you're out. Try a few products, ask the vendors a few questions, and see if this fresh food culture doesn't draw you in.

Lisa McReynolds Smith is a communications professional based out of Colorado Springs, Colorado. Born and raised in Texas, Lisa studied communications and photojournalism at The University of Texas at Arlington. Her editing career started with a copy editing internship at American Airlines for their in-flight magazine American Way. Since then, she has taken up myriad opportunities to share relevant content for businesses and associations across various industries. In her off time, Lisa enjoys exploring all that Colorado has to offer with her husband and rock-climbing Alaskan Malamute.