Pedestrian safety highlighted as US sees spike in fatalities 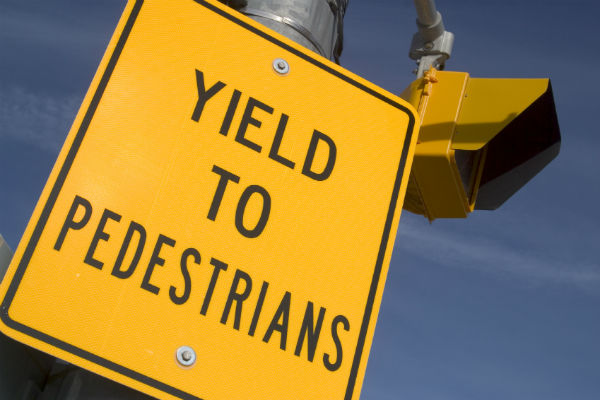 While walkers were tracking their step counts, the Governors Highway Safety Association was tracking the number of pedestrian fatalities in the first six months of 2015 ­­— and the numbers will make you look twice before crossing an intersection.

"We are projecting the largest year-to-year increase in pedestrian fatalities since national records have been kept, and therefore we are quite alarmed," Richard Retting of Sam Schwartz Consulting said in a GHSA news release.

According to GHSA, pedestrian deaths as a percentage of total motor vehicle crash deaths have increased steadily in the last 10 years. (Image: GHSA)

While it may be assumed the immediate cause is distracted driving, this is only a portion of the problem. The report found the uptick can be attributed to a number of other factors, including increased time spent walking, a growth in motor vehicle travel, economic conditions, demographics and fuel prices. The number of pedestrians using cellphones while walking also continues to rise.

Data published by the Federal Highway Administration last June shows motor vehicle travel increased by 3.5 percent, or 52 billion vehicle miles, in the first half of 2015 — the highest number of vehicle miles ever reported by the FHWA. With more drivers and pedestrians out and about, the chances of alcohol involvement are also imminent. In 2013, alcohol contributed to about half of the crashes involving vehicles and pedestrians.

Statistics and safety efforts from states

Florida had the highest rate of pedestrian fatalities with 1.35 fatalities per 100,000 people (273 total fatalities), while Vermont had zero. However, Vermont's population is only 626,000 compared to more than 20 million in Florida. Arizona and Delaware follow Florida at 1.27 per 100,000.

Safety measures taken by states also affect the number of fatalities, and Connecticut is a prime example. In 2014, the state ranked 23rd in the most pedestrian fatalities per 100,000 at 1.31. By increasing the use of road diets — bike lanes, sidewalks, turn lanes — and promoting educational efforts, fatalities declined to 0.42 in the first half of 2015.

"Pedestrian safety is clearly a growing problem across the country," Retting said. "It is important to understand the data underlying these crashes so states and localities can apply the right mix of engineering, education and enforcement to counteract this troubling trend."

How can states counteract this startling trend?

1. Public education — Before drivers and pedestrians can make change in behavior, they must be aware of the situation and risks. Public information campaigns are also useful in spreading awareness of new laws relating to distracted driving and other similar offenses.

Pedestrians can and should take proper precautions before lacing up. The Centers for Disease Control and Prevention (CDC) states older adults, males, children and those who are impaired by alcohol, are at an increased risk.

The CDC recommends the following tips:

The fact more people are choosing walking as their choice of exercise and transportation is encouraging, but the numbers reported by the GHSA raise a red flag to the dangers it poses for the population. With a collaboration between states, drivers and pedestrians to promote awareness, an effective plan can be put in place to bring the number of pedestrian fatalities down.