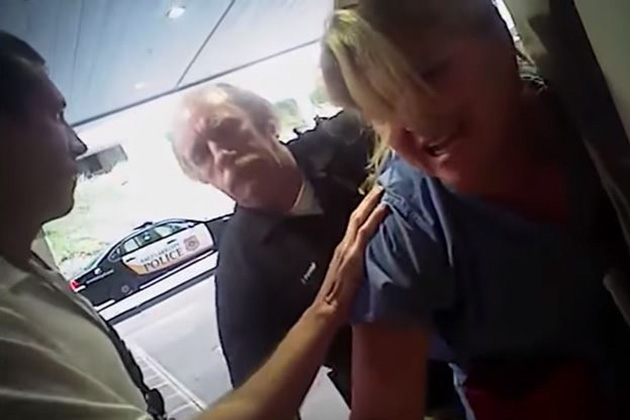 As many in the healthcare world, I was shocked with the unlawful arrest of nurse Alex Wubbels. In healthcare, there is a brotherhood and camaraderie between our law enforcement officers and healthcare workers, especially nurses. We all are on the front line of public service on a daily basis, making this story even more disturbing.

Although the situation originally happened July 26, the story finally was brought to the public eye Aug. 31 after Wubbels held a news conference and released the body cam video of her unlawful arrest while working. When I first saw the story start circulating, my initial suspicions were high — maybe we didn't have all the facts. But I watched the video and was truly disgusted and immediately angered by what I saw.

Thankfully, the national news began running the story, and attention from non-nurses was growing strength. We were clearly upset, and nothing appeared to be happening — this detective was still working.

Nurses and others called the Salt Lake City Police Department, left messages with city leaders and, in 21st-century style, went directly to the sources via the power of social media. The fire had been started.

By mid-morning Sept. 1, the University of Utah issued a statement of support for Wubbels, to which a community of nurses breathed a sigh of relief. Finally, administration and nursing on the same side of a fight — stranger things have happened.

It was clear from the statement that immediate actions were taken to change the procedure and prevent a bedside nurse from being in that situation in the future. Other hospitals might want to take note.

In the early afternoon of Sept. 1, the mayor and chief of police issued an official statement. Basically, it just reiterated that an ongoing investigation was in the process. As the public outcry continued, an announcement was released by the Salt Lake City Police Department stating that the district attorney was launching a criminal investigation into the incident and that the two officers involved were finally placed on leave.

If this is the way Detective Jeff Payne reacted to a nurse in a public place knowing his body cam was on, I don't want to imagine what he does when he feels truly provoked or in danger. So, I am glad he is off the streets.

I would suggest you watch the full footage of the officer who is with Payne — in a few words, it is disturbing. The conversations that led up to the unlawful arrest were troubling, and even more concerning was that the intimidation continued as Wubbels was detained in the car in handcuffs.

These officers were locked and loaded and ready to make a point with this situation. They are clearly irritated they are being challenged. This only means one thing — the last time they were there, the staff just went along, not knowing the policy and/or just trusting the officer was doing the lawful and correct thing.

This certainly is not an uncommon occurrence in ERs across the nation. There are plenty of anecdotal stories of officers just trying to get some blood to move things along, knowing they are skirting the real procedures. Well, now we have all been educated — thanks, Nurse Wubbels!

Wubbels did finally receive an apology from the mayor and chief of police after the public outcry. However, in her interview the day after the story broke, she was clear that she wants some solutions to come from this situation so it does not happen to another healthcare provider.

"I felt a duty to everyone that has ever had this happen to them that hasn't had the evidence that I have to show it," Wubbels said.

If by some crazy chance you are reading this humble post, know you are my hero. You are who every nurse aims to be as they set off in school but just don't know how they will ever get to that point in their career. You are the poster child for the everyday nurse, just trying to do what is right even when it is incredibly difficult.

I know you probably did not wake up that day and say, "Hey, maybe I can get catapulted into the national spotlight and arrested today." But you have handled yourself with grace, poise and strength. Know you have a nation of nurses behind you supporting you and cheering you on.