Nurses honor guards pay tribute to those who serve 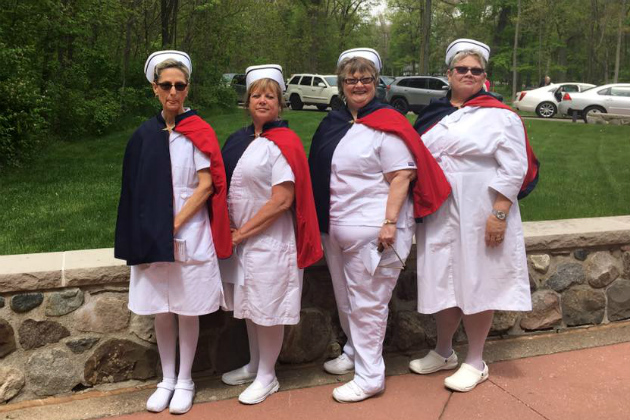 Julie Murray, second from left, knew she wanted to be a part of the nurses honor guard as soon as she heard about it.

Each Memorial Day, time is taken to remember those who have given their lives for our country. Services are held at memorial parks in which special attention and honor is given to those who paid the ultimate price while serving our country.

At many of these services, honor guards from various military branches will ceremoniously provide funeral honors for fallen soldiers. These volunteers will bring dignity, respect and a ceremonial reverence to those they attend.

Although the origins of a nurses honor guard are not entirely clear, their popularity has been growing in recent years. In 2003, the Kansas State Nurses Association created the Nightingale Tribute as a way to pay respect to nurses for their years of service to others. They developed a guideline to assist others in providing a tribute to a nurse at their memorial service in which the poem "She Was There" by Duane Jaeger, RN, MSN, could be shared.

Most who hear of the nurses honor guard are immediately drawn to the opportunity to serve their fellow nurse at their final resting.

Julie Murray, RN, OPEIU Chief Steward, first heard about the nurses honor guard from a colleague who presented it to their professional practice group.

"It brought tears to my eyes. I knew immediately I wanted to be a part of it," Murray recalled.

Volunteers were immediately obtained, and processes were put in place to develop a team. As with many nurses honor guards, they received support from their hospital foundation, as well as their union. Their group has been in existence for four years and serves any nurse in a 50-mile radius.

Active and retired nurses volunteer their time to honor their fellow nurses. The nurses don historical nursing attire, including capes and hats along with white uniforms. The nurses honor guard can stand guard at the nurse's casket or simply just be a presence at the visitation.

The Nightingale Tribute is usually read, followed by the release of duty ceremony with the nurse's name called (with no answer), and the nursing lamp is extinguished and presented to the family. Often, a white rose is placed in the casket symbolizing the nurse's dedication to his/her profession. The nurses honor guard participation in each funeral is tailored to the needs of the family.

"This ceremony honors the nurse in death as their life is often so defined by their commitment to the profession and it brings so much comfort to their families," Murray says.

For further information on setting up a Nurses Honor Guard, Murray has started a Facebook page with helpful information, including the order of ceremony and where to obtain caps and capes.

Often, nursing is perceived more of a calling than a profession, so it seems fitting to honor those who serve selflessly, just as we do for our fallen military.