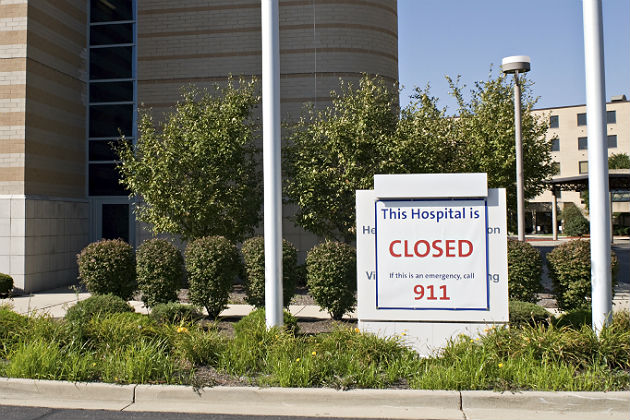 Since 2010, 95 rural hospitals have closed in 26 states as rural populations continue to crater compared to their urban counterparts. Rural hospitals are economic engines for the small communities they serve, and there are more than 60 million people who are cared for by these organizations.

Thus, the loss of these hospitals is a crisis on two fronts: people are losing much-needed access to care and they are losing high-quality and high-paying jobs not likely found or replicated in the area.

According to a new study, the economic effects of a lost hospital are immediate, showing that when a community loses its hospital, per capita income falls 4 percent and the unemployment rate rises 1.6 percent.

As might be expected, the bleak picture does not appear to be improving any time soon. The "Rural Hospital Financial Risk: A Navigant Analysis" study of the financial viability of rural hospitals nationwide shows 21 percent, or 430 hospitals, across 43 states are at high risk of closing unless their financial situations improve.

These hospitals represent 21,547 staffed beds, 707,000 annual discharges, 150,000 employees and $21.2 billion in total patient revenue. Additionally, these 277 of these rural hospitals are considered essential to their communities.

The factors leading to the drop in rural hospitals have followed a loss of agricultural and manufacturing jobs.

Those people who remain in rural communities tend to be either very old or very young, and these communities often have higher rates of uninsured, Medicaid and Medicare patients, leading to more uncompensated and undercompensated care. Likewise, Medicare payment reductions are a major factor of hospital financial health with the average rural hospital counting on Medicare for 46 percent of gross patient revenue.

"Many rural hospitals were originally built in the post-World War II era to provide a level and volume of care that is no longer needed," the Navigant researchers noted. "This factor, combined with the ascendance of managed care and an increased focus on outpatient services, has left many rural hospitals overstaffed and underused."

The average rural hospital has 50 beds and 321 employees, but a daily census of just seven patients.

This disparity also has led to an inability to innovate; many of those struggled here are unable to keep up with technological developments and lack capital to invest in updated technology. Adding to this is a federal burden. However, in 2017, U.S. Sens. Chuck Grassley, R-Iowa; Amy Klobuchar, D-Minn.; and Cory Gardner, R-Colo., re-introduced the Rural Emergency Acute Care Hospital Act, or REACH Act, meant to help rural hospitals by allowing them to "sidestep a regulatory hurdle that had become an added burden."

This is important because federal regulation requires many rural hospitals, designated as critical access hospitals, to provide a certain number of inpatient beds along with an emergency room, which forces hospitals that could be turned around to close instead.

The REACH Act would allow these hospitals to "resize and stabilize" under a new classification known as the Rural Emergency Hospital. These hospitals would be able to rid themselves of the excess inpatient beds and while gaining operational flexibility to move patients to larger hospitals and focusing on outpatient services.

But, as with many things in politics, the REACH Act has not been voted upon by the appropriate committee. Thus, "local, state and federal political leaders, as well as hospital administrators, must act to protect the well-being of rural hospitals nationwide and the communities they serve," the researchers said.