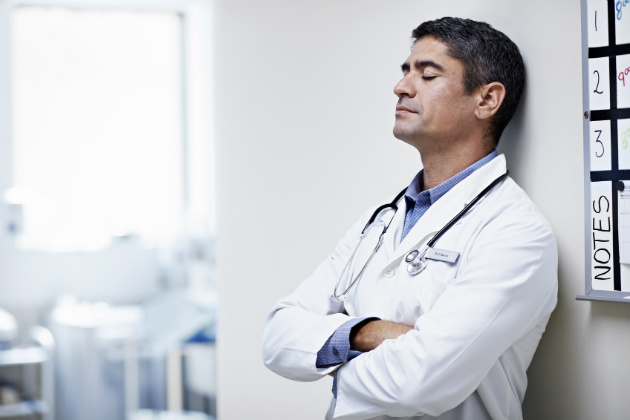 The numbers don't lie. Cases of opioid addiction and overdoses have been on the upward bound in the last decade. Just as alarming, more than half of practicing physicians today display signs of burnout, and those rates don't look to be declining anytime soon.

These are just two of the issues medical schools are grappling with. Why? Because critics think the reason for the rise in both issues stems from the lack of education in today's medical schools around treating pain in patients and physician well-being.

Medical schools are now meeting these issues head on by rethinking the way they approach both in the classroom.

Mentorship programs are nothing new to medical schools looking to cultivate a more balanced life for their students, but as physician burnout rates continue to rise, schools are taking a more hands-on approach to mentorship: teaching students how to recognize the signs of depression and equipping them with self-care strategies.

Stanford University Medical Center administrators recognized the importance of this difference approach early on, and in 2008 implemented a mentorship program to do just that. The program Educators-4-Care (E4C) pairs a faculty member with five to six medical students for the duration of their schooling.

Lars Osterberg, M.D., associate professor of medicine at Stanford School of Medicine and director of E4C, said that when students in the program have issues or feel overwhelmed, they typically come to the E4C faculty first, which he believes might have circumvented outcomes as serious as suicide.

In 2014, Loyola University Chicago Stritch School of Medicine introduced a new addition to their curriculum, an elective course in Transcendental Meditation (TM), making it the first major U.S. medical school to do so. The class was designed to reduce high stress levels common in Loyola's medicals students through techniques learned though TM.

The University of New Mexico School of Medicine equips students with a wellness toolkit targeted toward physicians who will practice in rural areas. The toolkit helps medical students achieve work/life balance and establish boundaries with patients while empowering them to become health coaches.

Some schools are even using technology to battle physician burnout.

In 2015, the University of Nebraska Medical Center launched the UNMC mobile app with which students can assess personal symptoms of burnout and navigate available services. Albert Einstein College of Medicine (Bronx, New York) experimented with wearables it provided to third-year students to monitor their stress levels.

Chronic disease cases are rising with a particular spotlight on opioid addiction and overdoses. In a July study, researchers found that opioid dependence rates had skyrocketed to more than 3,000 percent between 2007 and 2014, with the highest growth occurring after 2011.

In a recent interview with NPR, a Stanford University School of Medicine student couldn't recall ever taking a class on addiction medicine. It wasn’t until after reviewing his syllabus that he saw the topic was covered as a side mention — once — in a class he had skipped.

Despite rising addiction rates, the nation has seen "no huge change in prescribing behavior" around opioid painkillers, said Michael Botticelli, head of the White House Office of National Drug Control Policy, partly because "there is little to no education within medical education curriculums around addiction and safe prescribing."

Beginning this fall, more than 60 medical schools will fill that gap in their curriculum by requiring students to take a mandatory prescriber education course. This is due in part to a number of schools pledging to better educate their students on opioid painkiller prescriptions following the CDC's March release of their guidelines on opioid prescribing for chronic pain.

Many schools across the country have also implemented the Standardized Patient Program, in which students are put through scenarios on how to detect drug abuse in patients. Students are also being trained to offer alternate pain-relief methods before resorting to prescribing opioid painkillers.

Medical schools are recognizing that to prepare their future physicians to assimilate to the medical community's working conditions, the changes must start with education. Equally as important, they must equip students with the knowledge to properly care for the rapidly changing healthcare needs of their communities.

Lonny Alfred is a content editor at MultiBriefs with nearly four years of experience in digital media. She graduated from The University of Texas at Austin with a bachelor's degree in multimedia journalism.