Managers beware: Your employees are probably tired and anxious 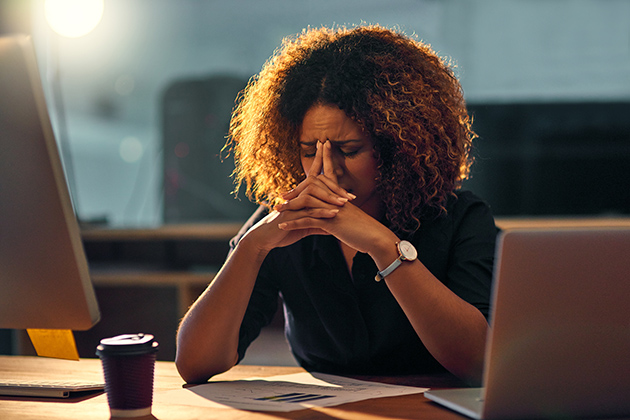 In a recent study published by Robert Half on the stresses of American workers, the primary outcome suggests that we are all very tired, and it's taking a toll on our performance on the job. Most of the literal lost sleep comes from work-related anxiety, according to a simple poll by global staffing firm Accountemps.

In it, more than 4 in 10 professionals (44 percent) are stressed about the following overwhelming workloads, looming business problems and strained co-worker relationships.

Workers were asked, "How often do you lose sleep over work?" Their responses were candid:

Among those who lose sleep over work, the following were cited as the root causes:

The survey also identified regions of the country where stress levels are highest for workers, with Miami, Nashville and New York leading the pack in regard to those who toss and turn the most at night. Chicago and San Francisco round out the top-five most restless towns. The best places to catch a full night's rest are Minneapolis, Cleveland and Washington, D.C., followed by Pittsburgh and San Diego.

"Work stressors can often follow you home, but try to check them at the door," Michael Steinitz, executive director of Accountemps, said in a statement. "If you have too much on your plate, schedule time with your manager to discuss possible solutions to alleviate the pressure, such as delegating work to others, adjusting deadlines or bringing in temporary help.

"Employee stress can lead to lower job satisfaction and engagement and higher turnover. Managers can support their teams by maintaining open lines of communication and planning regular check-ins to discuss workload and other worries."

According to a separate study published by Facilities Executive, a survey from Glassdoor recently showed that 74 percent of full- and part-time employees say they get less than eight hours of sleep on a typical work night, averaging just 6.9 hours of sleep.

That survey said that 66 percent of employed U.S. adults said they would be better employees if they got more sleep, especially those ages 18 through 44 (73 percent) compared to those ages 45 to 64 (59 percent).

"For many employees, a regular work day has become somewhat irregular," said Carmel Galvin, Glassdoor chief human resources officer. "With technology allowing employees to work remotely and flexible work schedules on the rise, employees are empowered to step in and out of work to accommodate their personal and family lives. But with this advancement, the lines of when work starts and ends can blur, potentially impacting the rest employees receive during the week to be at their best.

"Sleep not only provides physical restoration to the body, but it is critical for cognitive function, concentration and productivity," Galvin said.