Oops! Learn a lesson from these awkward RV mistakes 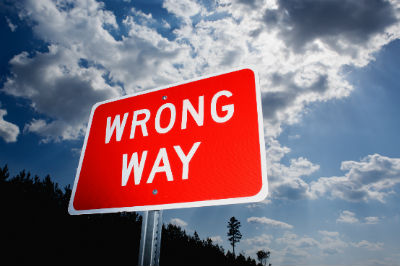 We often learn our greatest lessons in life by making mistakes. For some reason, correcting those mistakes makes a memorable impression. Some mistakes are comparatively easy to fix, while others are quite difficult.

As in everyday living, there are a lot of opportunities to make mistakes when RVing, as well — and we've made some doozies. We've also witnessed quite a few errors made by fellow RVers. Here are some of the more common ones.

One of our most common mistakes happens when extending or retracting the slide-outs. There is nothing that gives your stomach that sinking feeling more than hearing "crunch" while doing so.

The obvious solution is making sure items are out of the way, both inside the rig and out, before you extend or retract. Handwritten notes can be taped directly to the control panel reminding you to do so.

Inside, the damage can cosmetically be fixed by popping the broken trim back into place or reattaching a seat. Outside, the damage may consist of simply popping out the dent. In more serious instances, body shop work may be required.

Another mistake that is often made — though not always admitted — is leaving the TV antenna up when leaving a campground. It's not until you hear the "thwack" at the first overpass you drive under that you remember you forgot to crank it down.

Though not overly expensive to replace, the inconvenience of not being able to watch your favorite show or sporting event on TV leaves a lasting impression. It's also not always an easy feat to climb up on the rooftop to replace it.

Other common mistakes could include:

One of the worst mistakes we witnessed recently was made by a neighboring camper when he pulled out of his campsite without disconnecting, causing extensive damage to his RV as well as the campground hookups.

Water was spraying when the freshwater hose was broken at the connector. The leveling jacks left deep scrape marks in the driveway pavement, outlining the route driven.

What was he thinking? Obviously, he wasn't. Although I'm sure this doesn't happen often, observing this first-hand left an unforgettable impression on us.

Though not as serious, other mistakes may consist of leaving overhead vents open, not securing the awning tightly, or forgetting to stock up on supplies. Each of these can be easily prevented, as well as easily fixed.

The bottom line in preventing mistakes is take the time to visually inspect your RV, its surroundings and your campsite. Making a checklist and following it upon arrival and departure is also a good way to prevent mistakes from occurring. Lastly, think before you act.

Mistakes are going to happen at one time or another. Hopefully by sharing our experiences with you, it will help prevent you from making some of them. I'm sure other RVers have their own RVing mistakes — and solutions — to share (or maybe not).