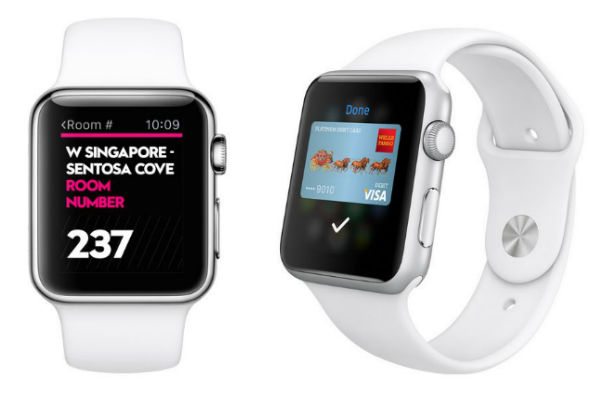 Starwood is working to integrate the Apple Watch as a room key, among other uses on its properties. (Images: Apple)

The adoption of mobile and wearable technology continues to grow within the travel industry. Forrester Research reported that mobile payments are expected to expand from $52 billion in 2014 to $142 billion by 2019 — and that's just in the U.S.

With the recent unveiling of the Apple Watch, all eyes are on this device and how it will change the travel landscape when it comes to mobile technology. The Apple Watch will be available for purchase on April 24, but Apple is already making waves in the travel industry with its mobile payment system, Apple Pay.

Marriott became the first global hotel chain to offer Apple Pay, with an announcement on March 10. Guests using Apple Pay at check-in will simply use their iPhone 6, iPhone 6 Plus, iPad Air 2, iPad Mini 3 and the soon-to-be-released Apple Watch at a contactless reader at the front desk by holding up their device. The device will then beep and vibrate that the transaction was a success.

"I would never bet against Apple in their ability to create a new consumer behavior," suggests George Corbin, SVP digital at Marriott Hotels. "Mobile payment is one of those areas that has struggled a bit to get its feet under it, but I think the real difference this time is Apple itself. They are relentless about creating a very smooth and intuitive user interface, so if ever there's a chance for mobile payment to enter the mainstream, I think this is it."

Marriott is not the only hotel making waves with Apple technology. Starwood Hotels & Resorts have been working with Apple for the past several months to integrate the Apple Watch into its on-property technology.

Starwood users would receive a push notification to their watch when their room is ready, and the system would provide guests with their room number. They would then use Bluetooth technology to tap the watch against the door lock to open the door.

At the end of April, Accor will offer guests an Accorhotels iOS app for the Apple Watch. The app will allow guests to receive notifications on things such as online check-in, information regarding their booking and their Le Club Accorhotels loyalty card details.

While the innovation of wearable technology provides endless possibilities for businesses such as hotels and retailers, the security risk becomes greater. Security experts note that companies who have created wearable technology cannot always keep safe the users' data.

"We have really reached an inflection point in 2015," said Adam Towvim, president, CEO and co-founder of TrustLayers Inc., a Massachusetts-based security company. "Even if someone's data stays properly secured inside of someone's four walls, the risk of misuse of data is as great as data leakage."

The Apple Watch will come with an opt-in PIN number, similar to iPhones. Once the PIN is activated, users will have to enter the pin each time they put on the watch. This means that the Apple Watch will have sensors to tell if someone is wearing the watch. If a user decides to setup Apple Pay through their watch, a passcode will become mandatory.

These security measures are proving to be important as fraudsters have recently targeted Apple Pay. Retailers such as Home Depot and Target have reported fraudulent transactions from stolen credit cards that went through Apple Pay. Although the Apple Pay system wasn't hacked, fraudsters were able to steal information from users who had entered their credit card information onto their phones.

Overall, hoteliers are preparing for the next wave of technology that will help change the industry.

"The marriage of high-tech and high-touch is poised to transform the hotel experience in so many exciting ways," Holdren said.