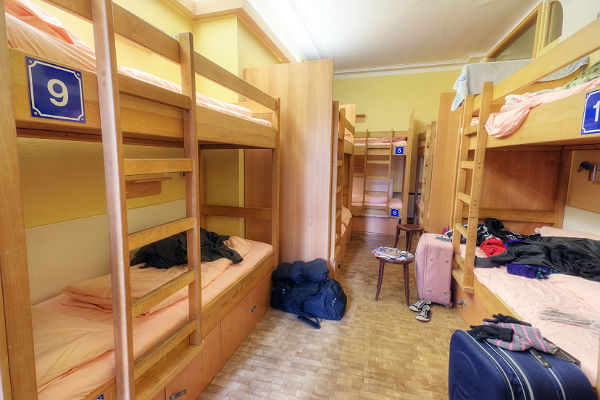 For years, people perceived hostels as the cheap lodging alternative for travelers on a tight budget, such as college students. Travelers could rent a bunk bed in a dormitory-like hostel, which usually included a shared bathroom, a small lounge/lobby and a shared kitchenette.

That perception has changed as more family travelers are now considering hostels as another accommodation option for their family trips. According to a new survey by ExpertFlyer.com, 72 percent of family travelers have already booked or would consider lodging facilities other than hotels, including hostels, homes and apartment rentals.

In fact, today's hostels offer more than just the bunk-bed option with shared bathrooms for college students or young travelers; they also provide private guest rooms with one or two beds (with or without a private bathroom). Some high-end hostels also feature similar amenities to what have been offered in upscale or luxury boutique hotels, such as "vibrant bars with specialty cocktails, yoga classes on the rooftops, and mahogany-filled rooms from interior designers like Roman & Williams."

The question is why all of a sudden have hostels become a cool place for travelers?

The shifting customer base has created a good business environment for hostels to grow and succeed. According to the 2013 and 2014 Lodging Industry Profiles reported by the American Hotel and Lodging Association, younger generations have already replaced the baby boomer generation as the most important source for both leisure and business travelers.

As hostels tend to attract younger groups of customers, the growing number of young travelers in the market creates a higher demand for this lodging product.

Another trend in the travel and tourism industry may also create positive impact on hostels — solo travel. According to The New York Times, the industry has seen a growing number of people who choose to travel on their own in recent years. Some are looking for new friends or dates during the trip. Because hostels allow travelers to easily interact with other travelers and local staff in a shared-space environment, they could be an ideal option for solo travelers.

When observing from the suppliers' side, many large hostels turn out to be nonprofit organizations. They carry the mission of "bringing different cultures together under one roof to promote tolerance and understanding." Under this mission, hostels create a friendly culture for their guests, staff and volunteers with various engagement programs. That is exactly what young travelers value as well.