Halos and pitchforks: The power of a positive first impression 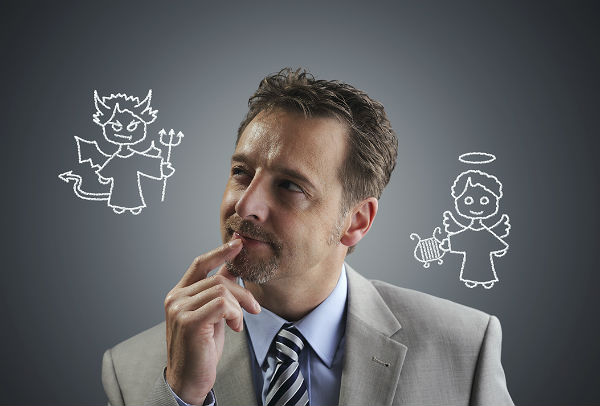 You never get a second chance to make a first impression. The adage is old, but when it comes to proposals and presentations, it's as important as ever. In fact, even the briefest of first impressions can become the lens through which a prospect views all of your remaining messages.

That's right, the first messages your prospect reads or hears are more than just the ones they remember most — they're the ones that have the biggest impact on your overall persuasion. How big? Let's find out.

Capitalizing on the halo effect

When reading a proposal or listening to a sales presentation, it's logical to think that prospects judge each piece of information independently, carefully weighing its strength and validity. Not true. As psychologist Edward Thorndike discovered in 1920, a positive first impression can create a confirmation bias, meaning that a prospect's feelings in one area cause them to view subsequent neutral traits more positively.

Thorndike confirmed this bias — what he termed "the halo effect" — through studies of military personnel evaluations. He found that when commanding officers evaluated soldiers in terms of several physical and personal attributes, the rating order had a dramatic impact.

Since the time of Thorndike's research, there have been numerous studies confirming the halo effect in all sorts of evaluation types, from politics and criminal justice to marketing and sales messaging. And regardless of the type, one finding has been universal: First impressions are extremely influential. In fact, a recent University of Toronto study found that during evaluations, first impressions can even trump facts.

The halo (or pitchfork) that never fades

As if the halo/devil effect isn't enough reason to lead with your most powerful, persuasive information — the two to three key benefits your service/product will provide the prospect — there's more. In addition to being influential, first impressions rarely change over time.

For example, a recent Stanford University study captured students' impressions after only a two-second video clip of a new professor, then again after a full semester of being taught by the professor. In nearly every instance, the first impressions were identical to those held after the semester.

Similarly, a recent University of Ottawa study had participants form first impressions of people based only on photographs. After interacting with the people for more than a month, the impressions stayed relatively the same.

The exact reasons for this phenomenon are still unclear, but its implications for proposal and presentation structures are tremendous. And it gets better. A recent study from Cornell University found that prospects are typically unaware of the ongoing influence of first impressions on their judgment.

The mantra of 'important things first'

Prospects form impressions quickly, and with people being more skeptical than ever, it's critical to start strong — in your proposal executive summary, in each proposal section, in each proposal answer and in your presentation. Remember: those are the messages they will retain and use to view your qualifications throughout the evaluation.

So before finalizing your document or sales deck, ask yourself: In the first 30 seconds, will the prospect know why choosing my company will benefit them? If not, it may be time for some revisions.