Finding the proper place for the arts in education: Intro 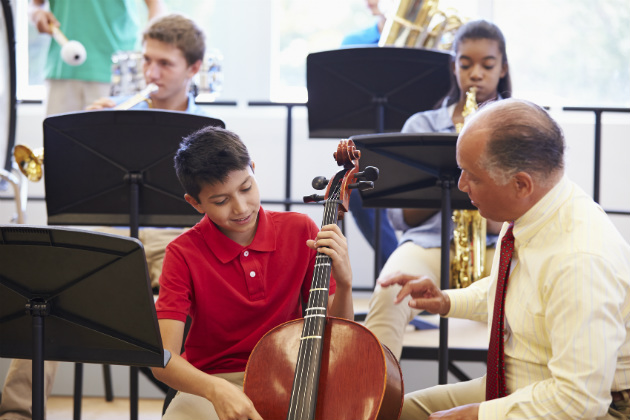 This is the first article in a six-part series on the importance of the arts in education:
Intro | Visual arts | Dance | Drama | Music | Media arts

"We say arts education is good for general education, but that's not the point. The arts are what great nations are remembered for. They are a mirror." — retired professional dancer Damian Woetzel

President Donald Trump's proposal to ax the National Endowment for the Arts from the U.S. national budget this spring alarmed the world and drew special attention to the arts. While funding ended up being increased for the fiscal year and the threat postponed until 2018, the question remains: Are the arts worth investing in as a nation?

In the arena of education, the debate about whether the arts warrant the investment of class time and money is ongoing.

Arts in education, which had been on the increase since the 1930s, peaked around the '80s and has been slipping since, according to a report by the President's Committee on Arts and Humanities published in 2011. Statistics from this point in time suggest that fewer than 50 percent of the adults polled reported having art lessons or classes in school as compared to about 65 percent in the 1980s.

Given that the large majority of today's teachers and administrators were educated during this period of decline, an absence or meager offering of arts in the classroom may not seem out of the ordinary for them much less a cause for alarm. On the flip side, some of the experts interviewed for this series reported that the lack of art in their own schooling has in part driven their commitment to giving today's youth a robust exposure to the arts.

The STEM to STEAM movement, spearheaded in 2012, continues to challenge the premise that what youth most urgently need to be properly prepared for an uncertain future are math, science and technology. Instead, it places art within the STEM acronym to drive innovation by creating synergy between the sciences and arts. Concrete objectives include encouraging the integration of art and design in K-12 education and ultimately influencing employers to hire arts and design graduates.

"Whether today's students go on to be artists, doctors or politicians, we know that the challenges their generation faces will demand creative solutions," writes John Maeda, former president of the Rhode Island School of Design and initiator of the movement. "We should fully expect that, in the coming decades, many of our best leaders will come from art and design backgrounds."

Making the arts a part of every child's life in the U.S. by the year 2020 is the new objective set by members of the Arts Education Partnership. Their reason — stemming from decades of research compiled by the organization — is crystal clear.

Compared to students with little or no involvement in the arts, students who are highly involved in the arts — particularly in school settings — stand out performance-wise with the difference being even more significant for economically disadvantaged students. Performance measures include higher grades, a more positive attitude about school and lower high school dropout rate.

"When you think about the purposes of education, there are three," said Tom Horne, Arizona's state superintendent of public instruction in the Edutopia series "Why Arts Education Must Be Saved." "We're preparing kids for jobs. We're preparing them to be citizens. And we're teaching them to be human beings who can enjoy the deeper forms of beauty. The third is as important as the other two."

Fairly recently, Australia revamped its standard curriculum, placing a new emphasis on its arts education "to provide opportunities for students to learn how to create, design, represent, communicate and share their imagined and conceptual ideas, emotions, observations and experiences."

Five different art disciplines are covered — visual arts, music, dance, media arts and theater — with aims that include promoting the "understanding of local, regional and global cultures, their arts histories and traditions as well as use of innovative arts practices with available and emerging technologies to express and represent ideas while displaying empathy for multiple viewpoints."

Even if we take as a given that the arts are indispensable in the education of our young people, that still leaves considerable room for debate around actual implementation in the classroom — for example, the issue of breadth of exposure verses development of mastery. This is the case in Australia's where some critics — including teachers of arts programs — claim that requiring students to explore various arts disciplines doesn't allow them to gain a depth of experience in any one.

In Part 2 of this series, we examine the benefits of involving school children in visual arts.