Finding the proper place for the arts in education: Drama 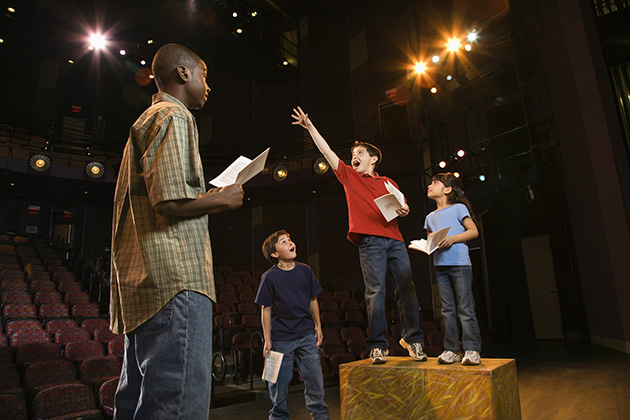 This is the fourth article in a six-part series on the importance of the arts in education:
Intro | Visual arts | Dance | Drama | Music | Media arts

Like the rest of the arts, participating in drama serves as a weapon against ignorance and gives young people tools that enable them to think and act for themselves in their lives.

Involvement in theater facilitates the development of self-knowledge and the ownership of oneself, which makes it more difficult to be influenced or controlled by societal forces. Through physical theater exercises, young people connect deeply with their emotions and inhabit their bodies in a way that is becoming less and less common in today's digital world.

Theater arts in the classroom has proven benefits for students at all levels of their education. Viewing live theater as well as participating in the process as an actor benefits students enormously in terms of academic achievement and character building. Statistics even link higher SAT scores to participation in drama performance.

"Young children who engage in dramatic enactments of stories and texts improve their reading comprehension, story understanding and ability to read new materials they have not seen before," writes Michael Jacobs in his thesis, "Drama Discovery." "The effects are even more significant for children from economically disadvantaged circumstances and those with reading difficulties in the early and middle grades."

Acting is a visceral experience that engages all the senses and the imagination. It allows students to become someone else and transport themselves to another time and place. This explains why some teachers find using dramatization highly effective when teaching subjects like history.

For adolescents, in the face of the sudden physical and emotional changes they experience in their bodies, practicing drama provides an outlet for fear and anxiety, and tools for managing the intense feelings, explains professional actor and drama instructor Antonio Sparza. They feel more secure with themselves, quite often overcoming awkwardness or shyness.

The theater arts enhance students' psychological well-being, by allowing them to express feelings and emotions under the protection of a character or script as well as helping them define who they are. It also inspires them to consider moral issues, develop values and increase their empathy, cites the California Educational Theatre Association.

Being an active viewer of a live theater production is also highly valuable, as demonstrated in a 2015 study by Professor Jay Greene. Compared to students who read or watched the same play on video, researchers found that the group of students who went to see the live production demonstrated enhanced knowledge of the plot, increased vocabulary, greater tolerance, along with improved ability to read the emotions of others.

According to Dr. John Montgomery, head of curriculum at The Scots College in Australia, the performing arts — more so than any other curriculum area — arm students with the highly-desired 21st-century skills of critical reflection, collaboration, creativity and communication. The people skills honed by involvement in theater are essential to working as a collaborative team member within academic and future work settings.

A strong theater arts base is a great asset when entering the world of work.

Along with preparing students interested in employment in the entertainment industry, the problem-solving and critical thinking skills they develop by doing scene work, character analysis and stagecraft will serve students well in nearly any profession they pursue. Owning the self-confidence and knowledge to present oneself in front of an audience becomes a clear advantage in the business world whether interviewing for jobs, conducting speeches or meeting potential clients.

"The performing arts in education provides students with the opportunity to engage the mind, the body and the emotions into a collaborative and communal expression of all that it means to be human," Montgomery said. "Through study and performance, students explore and present great themes and ideas. They discover their own voice, they grow in confidence and particularly through drama they develop empathy and ethical insight into the contradictions and paradoxes of the human condition.

"Whether or not this makes us more economically productive is greatly secondary to the riches of growing in understanding of what it means to not only be human but what it means to be good, noble, honorable, kind and compassionate."

In Part 5 of this series, we examine the benefits of involving school children in music.