Federal surveillance, track-and-trace technology may be on the way for future COVID-19 outbreaks 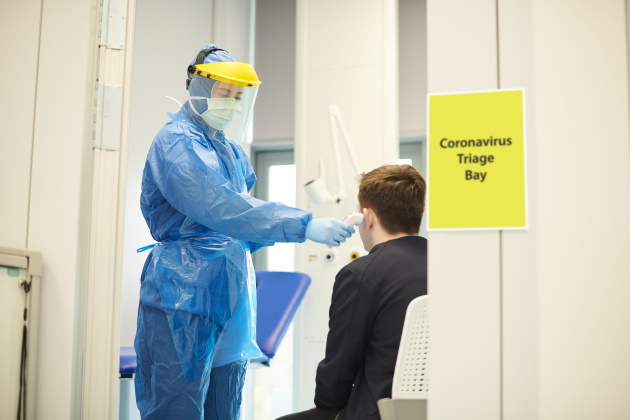 Cases may slow down in coming months, but mass testing and tracing will likely be needed to prevent a large outbreak in fall.

Economies are cracking, and many of the world's leading countries may be on the verge of what's being called the next possible Great Depression as the coronavirus COVID-19 continues its reign of terror and control the world over. The European Union has been rocked as member states Spain and Italy are among the hardest hit on the planet, even while in the U.S. President Trump's administration makes plans for the opening of an almost entirely shuttered economy by as soon as May.

Portions of the U.S. — those areas with the most cases of the virus — are seeing their health systems become overwhelmed. Among the carnage, former top government healthcare officials Scott Gottlieb and Farzad Mostashari are proposing the construction of a national COVID-19 surveillance system.

Such a system, they said in a recent policy paper, calls for the implementations of tools and policies “to conduct more effective surveillance, containment, and case management of COVID-19 for the future.”

In sum, several of healthcare’s insiders want structure in place now so that when the next wave of infections strike —many feel another wave is coming at some point later this year — the government must put in place a system to "assure the public’s safety … for a sustainable and secure approach to reopening our communities.”

The report authors include former Food and Drug Administration commissioners and physicians Gottlieb and Mark McClellan, along with Mostashari, who served as the national coordinator for health IT.

The healthcare leaders outlined four benchmarks for the development of disease surveillance capabilities:

The authors call for the Centers for Disease Control and Prevention (CDC) to fund the initiative and collaborate with state and local public health authorities.

Increasing testing capacity throughout the country is a crucial strategy of the plan, the strategists say. They go on to say that CMS and the Office of the National Coordinator of Health IT should then encourage the adoption and use of electronic standards and reporting to enable rapid electronic reporting of COVID-19 related laboratory test results from providers, labs, or other testing sources autonomously.

A common platform to deliver and query data from hospital electronic health records, health information exchanges, and organizations like CommonWell will centralize data for consumption.

In the meantime, or separately, technologists are developing solutions that might be effective in tracking those with the virus and alerting people in the surrounding areas so they can prepare or steer clear.

According to LiveScience, these methods are already being used in South Korea and Singapore. Both nations used digital techniques to track those infected, determine who they've been in contact with, and test and isolate those who may be infected. “Those actions appear to play a significant role in the fact that neither country has so far been able to control the spread of the virus and begin,” the site reported.

In Singapore, track-and-trace efforts may be a bit too Big Brother for most Americans, but the efforts seem to work. For example, the tracing of credit card transactions, security camera footage, and mass-collection of GPS data. In South Korea, things are a little more authoritarian: fines for people who don't download an app that can track their movement.

Nevertheless, voluntary mobile app usage could perform a similar function as what these two countries use, but would be less invasive, and may effectively control the epidemic.

The U.S. has performed contact tracing in the past. Still, it has been manual, nothing like either the use of apps nor the creation of a new tracking and info gathering/sharing federal framework, as the healthcare insiders announced. Even Facebook also is developing a voluntary tracker with Carnegie Mellon.

Others believe artificial intelligence and anonymous-use technology is the path forward. The use of such technology combined with widespread testing may help create a framework for cities to combat the disease.

“If someone you had coffee with two days ago tests positive for the coronavirus, you would get a notification along the lines of ‘you may have recently been exposed’ — and advising temporary isolation. Passing someone on the sidewalk wouldn't be enough to trigger a notification, but sitting next to each other for 10 or 15 minutes might,” technologists point out.

No matter the type of "tracking" program, it's evident that change caused by coronavirus is coming, either through additional track-and-respond federal programs or modern track-and-trace technology at the consumer level.

Like in times of previous national emergency, once we’re out of immediate danger, life as we know it will be different.