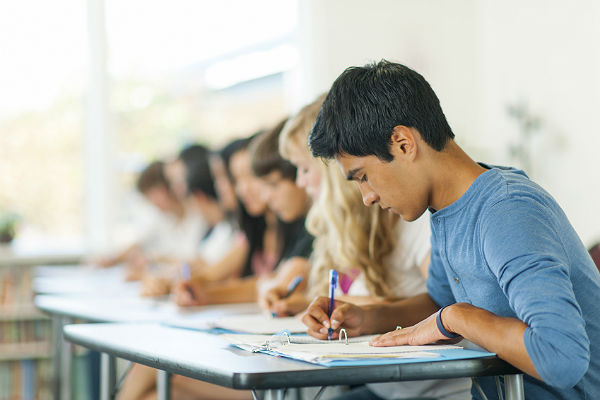 Here is another example of Arabic writing from an Arabic autobiographical novel, "Al-Khandaq al-Ghamiq" by Suhail Idriss. There are no errors, but the rhetorical system is different from that of English. Parallel ideas are developed, and the writer jumps around (my comments in bold):

(Idea 1-games) He and his eldest brother, Fawzi, would gather the neighborhood children together and (description 1-leadership) organize a program of games for them. Thus they guaranteed undisputed leadership for themselves. The program always used to end (idea 2-trip) with a trip down al-Khandaq al-Ghamiq (digression) Street. They didn't know why it was called by that name; even though they had noticed that (description 2-street) the road was long and descending. Perhaps it had been dug out at one time as a war trench. He would go down al-Khandaq al-Ghamiq Street with the neighborhood children in pomp and ceremony until they reached a main road of the city which they considered the end of their district and the start of a new one whose walls they dare not encroach upon. In it was the big city which was forbidden to them; however, they liked al-Khandaq al-Ghamiq, and they considered it their neighborhood, finding great pleasure in its exploration. At the start of the program (idea 1- games) they would make a short trip to Muallem Abu’s (digression-store) and Mahmoud's store. He had been master of the (history of owner) Koran school where most of them had gone.

The story continues with a description of harsh former schoolmaster. In the Arabic rhetorical system, paragraphs are developed through a series of complex parallel constructions.

In this example adapted from Robert B. Kaplan's "Cultural thought patterns in inter-cultural education," the rhetorical errors are examined. Errors are left in place. (My comments in bold):

(Defines college, not college education.) College is an institution of an higher learning that gives degrees. All of us needed culture and education in life, if no education to us; we should go to living hell. (New topic?) One of the greatest causes that while other animals have remained as they first man along has made such rapid progress is has learned about civilization. (Another topic-Man) The improvement of the highest civilization is in order to education up-to-date. (Jumps to civilization) So college education is very important thing college education which we don't need mention about it. (Concludes without defining) (Adapted from Kaplan, 1966)

Notice how the writer seems to circle around the stated topic "Definition of College Education" without really defining it because it is so important that we don't have to even mention it. At the sentence and vocabulary level, the student needs more work on verbs, punctuation and word choice.

The following example of a Thai student's composition in TESOL Quarterly shows how grammar deficiencies — in this case definiteness — can destroy meaning. "Thrift stores" is the theme. Errors are left in place:

This article is about a thrift store in the United States that has become a way of life for many college students. This remind me about this kind of store in my country. In Bangkok, the capital of Thailand, we have a used clothing store that sell clothes, shoes, and sometimes a musical instrument for a very cheap price.

Moreover, Bangkok thrift store is different from American thrift store in the idea that in the article, many students said thrift store allowed them to express their individuality. But in Bangkok, people wanted to go to the thrift store because they wanted to dress up in the clothes that once were used by their favorite person. (Zalewski, J., winter, 1993)

The reader questions if the writer is referring to a specific thrift store or to the generic idea of a thrift store. At first reading, it seems the author has a certain store in mind that he will describe. But he jumps to Bangkok where it seems there is a similar store where he used to shop.

However, is he referring to just one store back home or perhaps a chain or again just the generic idea of thrift stores? In this case, what teachers may conceive of as a local error actually interferes with meaning.

An ESL teacher in Vietnam had these comments on the writing patterns of her students:

Though we Vietnamese ask questions very directly, when we talk among ourselves or write, we go around the subject; we don’t get right to the point. Therefore it is very difficult for us to teach the students to write effective paragraphs.

Concerning Chinese rhetoric, Chinese teachers have the following to say:

If Chinese people state the thesis statement at the very beginning, readers would lose interest in reading the writing piece ... Chinese writing is usually more indirect and thus authors may write in a roundabout way. Sometimes Chinese writers are afraid of hurting other people. So they may beat around the bush or write in circumlocutions and then return to the main theme at the end.

By being aware of these differences, ESL writing instructors and anticipate interference and stress the English rhetorical patterns as the students go through the writing process.