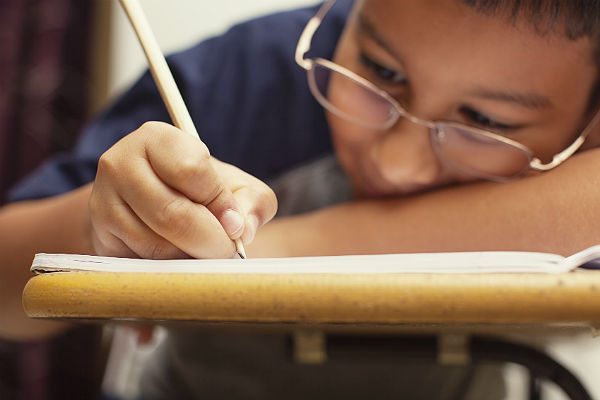 Culture and writing go together — and writing patterns reflect the L1 culture. The ACTFL Standards acknowledge the importance of culture in language teaching:

"Through the study of other languages, students gain a knowledge and understanding of the cultures that use that language and, in fact, cannot truly master the language until they have also mastered the cultural contexts in which the language occurs." (National Standards, 1996)

Perhaps the most difficult aspect of English writing is style and rhetoric. The transfer of cultural thought patterns from one linguistic base to another results in comments on student papers such as "loose ends, vague or wordy." The accepted patterns of English rhetoric must be taught through a systematic approach that gives the writers plenty of opportunity for revision and extensive outside reading.

As the ESL student attempts to communicate, he or she draws upon the L1 database and communication strategies. The first language may substitute for English when the writer or speaker has to produce but has not acquired enough English to do so.

First language influence often interferes. If students are not sure of what to write, they may just translate, resulting in something does not make sense in English. ESL learners have experience and knowledge drawn from their own language and culture, and crossover (interference) is likely as they try to communicate in the new language using the skills they already possess.

It is helpful for teachers to know how the L1 rules differ from those of English in order to predict common errors in writing. Here's an example of a big difference in Russian:

"In Russian, there are no determiners (no words equivalent to 'a' and 'the' in English)," writes Gus Lubin for Business Insider. "As a result, native speakers of Russian tend to omit determiners in English. For example, a native speaker of Russian uses the following sentence in our data: 'I was champion of swimming competition in Russia,' instead of, 'I was the champion of a swimming competition in Russia.'"

Another area of interference is the N+N construction:

"Another pattern that is common with French natives is preference for the construction 'noun preposition noun' over 'noun noun' compounds which are less frequent in French," Lubin writes. "Hence, French natives may prefer 'licence for sailing' over 'sailing licence,' and 'manager of Bruce Springsteen' instead of 'Bruce Springsteen's manager.'"

Count and noncount nouns differ, so when students translate from L1, errors result:

"Different languages have different count/mass noun distinctions," Lubin writes. "For example, information, furniture and homework are count nouns in French, and so natives of French may say informations, furnitures and homeworks in English."

By being aware of the contrasts between L1 and English, instructors can anticipate the errors and provide positive feedback to students, particularly in writing where the errors are more noticeable.

Robert Kaplan contrasts several different L2 rhetorical patterns to English. Arabic depends upon a series of parallel ideas developed simultaneously with more conjoining than embedding. The Asian approach is more circular, while the Russian and Romance writers tend to digress frequently as they approach the subject.

Each language and culture has a system of paragraph writing unique to itself, and the learner has the task of mastering a new logical system.

For example, in Germany there is a strong tradition of writing, and students write in specific genres such as the exploration of different viewpoints on controversial issues or text based summary-analysis-response. French writers employ critical reading in the writing process, which is driven by formats such as explication de texte and dialectical essays.

At that time of year I was not studying enough to pass my courses in school. And all the time I was asking my cousin to let me ride the bicycle, but he wouldn't let me. But after two weeks, noticing that I was so much interested in the bicycle, he promised me that if I pass my courses in school for that year he would give it to me as a present. So I began to stuy hard. And I studying eight hours a day instead of two.

My cousin seeing me studying that much he was sure that I was going to succeed in school. So he decided to give me some lessons in riding the bicycle. After four or five weeks of teaching me and ten or twelve times hurting myself as I used to go out of balance, I finally knew how to ride it. And the finals in school came and I was very good prepared for them so I passed them. My cousin kept his promise and gave me the bicycle in a safe place, and everytime I see it, it reminds me how it helped to pass my courses for that year. (Adapted from Kaplan, 1980).

Roughly 65 percent of the sentences in the passage use coordinating elements. Other errors include translations and article usage. This pattern is typical of modern Arabic narrative prose. The typical Arabic sentence runs into the next one with the connector "wa" meaning "and."

These examples will help instructors see some of the L1 patterns they may cause interference as the students move from sentence level to paragraph level and finally to the full essay.