DoubleTree shows how to win customers with a small touch 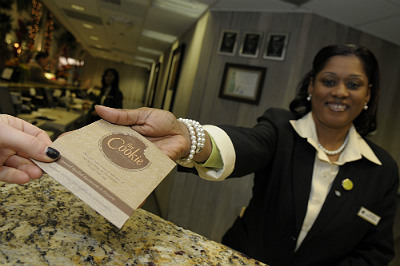 In the effort to respond to the shifting customer base, hotels spare no time or money in developing fresh concepts. New hotel brands have sprung up like mushrooms after rain. In 1980, there were only 81 hotel brands, but the number had grown to 210 by 2006.

In front of hundreds of hotel brands, many travelers might have difficulty distinguishing one brand from another. Competition becomes steep. Then, in addition to offering the state-of-the-art facility and exceptional customer service, what can a hotel do to build a clear brand identity and win more loyal customers?

Adding a "small touch" may help. DoubleTree by Hilton, for example, just announced a global "Cookie Care" campaign on March 20, celebrating the brand's 25th anniversary and its 300 million cookie milestone. DoubleTree is giving out the hotel's signature chocolate chip cookies to in-house guests as well as nonguests in all properties, from its home locations within the U.S. to the ones in China.

According to HotelChatter.com, the DoubleTree cookies were only handed out to VIP guests in the late 1980s. It was not until the 1986 that the hotel chain developed a secret recipe for its signature cookie. Since then, all cookies are baked daily at the hotel to ensure freshness.

So, what is the big deal of giving out a cookie?

Some people may not even like cookies, but "it's something that seems to transcend all cultures — a chocolate chip cookie," according to John Greenleaf, the global head of DoubleTree. Consumers look at DoubleTree's signature cookies as a symbol of the brand's "care" culture. As a result, the DoubleTree cookies have become the buzzword for the hotel brand on the Internet.

Here is an example: A traveler with a username of "ConchitaConsuela" stayed in a DoubleTree Hotel in Norfolk, Va., and wrote a review on TripAdvsior. Based on her review, the hotel offered nothing special. Her overall rating of this hotel was only three out of five, but she added: "He gave us our warm cookies, which turned out to be one of the best things about the hotel. That was one darn good cookie!"

The fact is no matter how poor or how superb a guest felt about a particular DoubleTree Hotel, s/he often talked about how good the signature cookies were on Facebook, Twitter, Yelp and other social networking or online review sites.

Because of the consistent and glorious comments about the hotel's one small touch, DoubleTree now can leverage the power of its signature cookies with a global "Cookie Care" campaign, including:

By now, the Cookie Care campaign has already helped the brand achieved many media exposures on all mainstream news networks. So, do you think it is worth adding a small touch?