Despite Trump’s talk, ‘Brand USA is here to stay’ 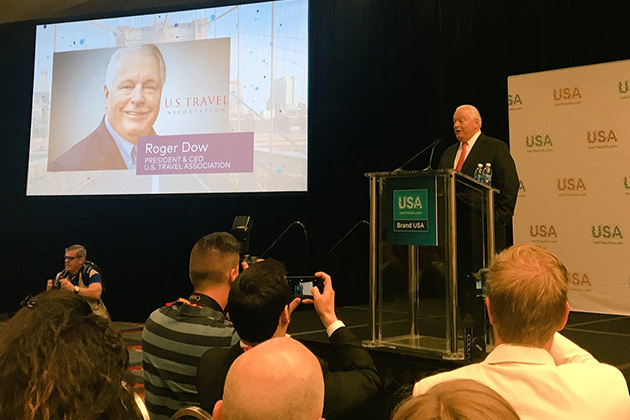 WASHINGTON — "You can print this: Brand USA is here to stay. It's as simple as that," Roger Dow said.

Brand USA promotes the U.S. overseas as a tourist destination for international travelers. President Donald Trump recently called for the elimination of the destination marketing organization as part of his plan to reduce travel from foreign countries.

"What we're experiencing right now is really no different than any time when we welcome a new administration," said Christopher Thompson, president and CEO of Brand USA. "A new president has come off the campaign trail; he has made promises and assurances of what he wants to do. In this case, the president's focus initially was policy that directly affects travel."

Despite several setbacks, Trump continues to push his rhetoric of establishing a travel ban on six Muslim-majority countries, despite the ban being denied by the 9th U.S. Circuit Court in recent weeks. He's now aiming for the Supreme Court to hear the case as he doubles down on calling it a "travel ban."

People, the lawyers and the courts can call it whatever they want, but I am calling it what we need and what it is, a TRAVEL BAN!

The Justice Dept. should have stayed with the original Travel Ban, not the watered down, politically correct version they submitted to S.C.

Despite the talk from the Trump administration, Brand USA continues to remain strong in numbers and marketing initiatives. Since its establishment thanks to the Travel Promotion Act in 2010, Brand USA has representative offices in 20 international markets covering more than 40 countries making up 93 percent of inbound visitors to the United States.

The destination marketing organization emphasized that over the past four years, they have helped to welcome more than 4 million incremental international visits and have added almost $30 billion in total economic impact during this time as well.

"We're responsible for doing two things: First and foremost is promoting the entire United States — 50 states, five territories and the District of Columbia ... Everything about that is as amazing as it ever has been and it is a privilege for us to do," Thompson said.

As Brand USA continues through 2017 and beyond, several initiatives are in the works to continue to promote the United States.

Earlier this year, the U.S.-India Travel and Tourism partnership kicked off.

"The U.S.-India Travel and Tourism Partnership Year will support our ongoing tourism efforts with India," Thompson said. "The partnership year will provide the framework for mutually-beneficial growth in visitation and spend from India and the United States. Brand USA and the U.S. travel industry will seek to capture an increasing share of this new business, which will be an important contributor to growing traveler spending and creating jobs across the United States."

In 2015, the U.S. welcomed 1.1 million Indian visitors to the country. By 2021, the National Travel and Tourism Office predicts that Indian arrivals to the U.S. will grow by 72 percent.

Brand USA is also getting the United States back on the big screen. The first effort is a followup to their 2016 documentary "National Parks Adventure."

"America's Treasure" (working title) will focus on the story of local culture throughout the U.S. through music.

"I'm glad I get to tell my story about the United States through music. We visited so many amazing places so far and have had amazing opportunities to talk to some of my heroes," said singer and songwriter Aloe Blacc, who in the film travels across the country speaking to musicians on how music has created different cultures and experiences.

Brand USA also has established a new marketing campaign, which shares its name to this year's them of IPW — "One Big Welcome."

One Big Welcome allows those who have visited the U.S. and those who live here in the U.S. to create videos telling the story about where they live or have visited that the U.S. continues to be open and welcome for all.

"America's relationship with the rest of the world in this era of transition and disruption is on minds across the globe," Dow says. "Washington is one of the most-watched cities in the world, yet one of the least understood. Capitol Hill isn't just the mess you see on the news — it's actually a vibrant neighborhood with parks and cafes. We need international travelers to realize they should come see this place for themselves — and that America wants them here."

This year's IPW is set to welcome more than 6,000 attendees from 70 countries.