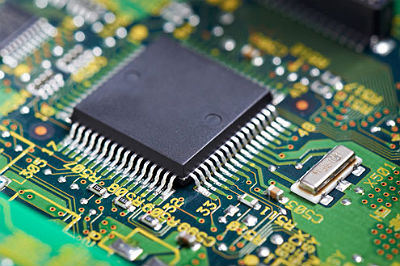 Note: This is the third article of a three-part series covering plastics in electrical and electronic (E/E) device (1) trends, (2) material/process advances and (3) applications.

E/E devices keyed to polymer-based technology are being developed for the nanophotonics market that could make computers and the Internet 100 times faster.

Researchers at Samsung have discovered a method that could allow a single crystal of graphene to retain its electrical and mechanical properties across a large area. The process could allow graphene to be used at its full potential in future electronic devices.

Elsewhere, Purdue University/Fudan University researchers are working with "phosphorene" — which has a similar structure to carbon-based graphene but is made of phosphorus atoms. Phosphorene has natural semiconductor properties, giving it an edge over graphene and so may be better at turbocharging the next generation of computers. The new material has already been used to make rudimentary transistors.

Researchers at Tel Aviv University have created a plastic optical data filter that when used in fiber-optic cable switches could make communication devices smaller, more flexible and more powerful. The filter is made by embedding nanometer-sized grooves in a plastic sheet. The devices can perform at breakneck speed with excellent quality and low cost. They could become commonplace within 10 years.

Let's take a look at some other cutting-edge plastic E/E device applications coming of age.

This includes brain-controlled prosthetic devices that could, for example, allow paraplegics to control robotic limbs or a computer mouse. Crucial to the problem is development of microelectrodes that record neural activity from the same neurons for years with high fidelity and reliability.

Researchers at the University of Pittsburgh have developed an ultrathin electrode spun from a single carbon fiber that can record neurons in living animals. The "stealthy neural interface" that has the potential to last for 70 years, is made from a single carbon fiber coated with xylene-based chemicals to make it resistant to proteins in the brain.

The new microthread electrode, approximately 0.007 millimeters in diameter, is designed to pick up signals from a single neuron as it fires. The electrode is the thinnest yet developed, and about 100 times as thin as the conventional metal electrodes widely used to study animal brains. The new carbon-fiber electrodes could eventually be used to send signals to prosthetic limbs, overcoming inflammation larger electrodes cause that damages both the brain and the electrodes.

Conventional electrodes — stiff and large compared to neurons — are attacked by the immune system and stop recording after several years as scar tissue builds around them. The new, ultrathin electrodes are unobtrusive, eliciting much reduced chronic reactive tissue response, and therefore do not have these scar tissue issues.

The new neural interface is composed of a single carbon-fiber core, coated with 800 nanometers of poly (ρ-xylene), a dielectric polymer that acts as a dielectric barrier to block out signals from neighboring neurons. A 50-nanometer-thick conductive pad layer of poly (ρ-xylene-4-methyl-2-bromoisobutyrate) at the tip of the thread touches the surface of a single neuron to pick up its signals.

A new, compact sensor able to detect trace levels of gases has been made by researchers from the Massachusetts Institute of Technology Quantum Photonics laboratory from microscopic polymer light resonators, which are materials that expand when specific gases are present.

Key to the technology is photonic crystal cavities made from polymethyl methacrylate (PMMA), which swells when it comes into contact with gases. The extremely sensitive and compact optical sensors can detect minute amounts of target molecules. The PMMA can be treated to interact with various target chemicals, making the sensors suitable for a range of applications.

The PMMA is infused with fluorescent dye, which emits selectively at the resonant wavelength of the cavity through a process called the Purcell effect. At this resonance, a specific color of light reflects back and forth a few thousand times before eventually leaking out.

A spectral filter detects this small color shift, which can occur at even sub-nanometer level swelling of the cavity, and in turn reveals the gas concentration. PMMA can be treated to interact specifically with a range of different target chemicals, making the MIT team's sensor design highly versatile.

The 400-nanometer-thick PMMA films are patterned with structures that are 8-10 micrometers long by 600 nanometers wide and suspended in air. The sensors are easily reusable since the polymer shrinks back to its original length once the targeted gas is removed.

The anticipated development for these devices is as sensors across industrial, environmental and biological uses including large chemical plants for industrial safety devices, or for detecting toxic gases in homeland security applications. In medical use, the polymer material could be treated for detecting specific antibodies. 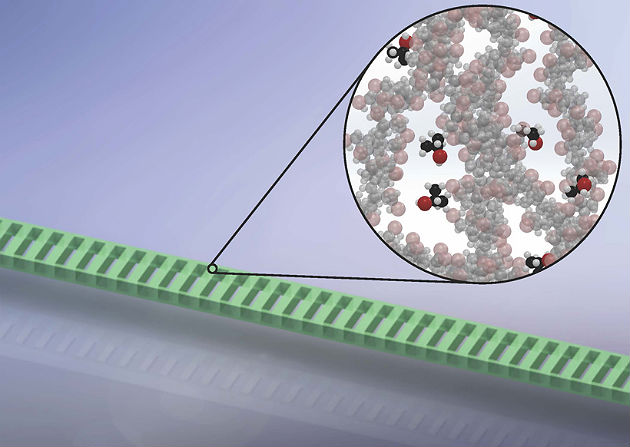 Features include the following: