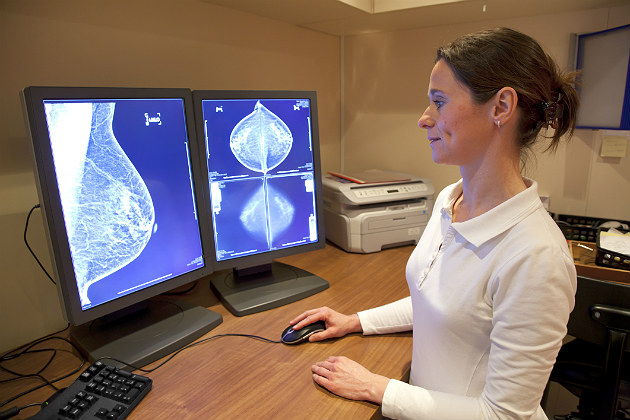 This article is the first of a three-part series on breast cancer: diagnosis | treatment | surgery

One of the most important advances in breast cancer diagnosis comes from the strides made in mammography. Phase contrast X-ray imaging, ultra-high-field MRI scanners, ultrasound and combinations of such new advances has greatly improved routine screening and patient care.

In a recent study in Vienna, an ultra-high-field MRI was used to facilitate a more accurate diagnosis in breast cancer patients. The 7-Tesla MRI has a new generation of coils that can deliver personalized accurate diagnoses almost 97 percent of the time.

Researchers in Zurich, used a new imaging technology called X-ray phase-contrast mammography that affords much greater precision in diagnosing breast cancer and its precursors. By using this technology, in conjunction with standard mammography, researchers expect better quality and resolution, as well as a better diagnosis because breasts can be examined more closely.

MRI is increasingly used for breast cancer screening, diagnosis, treatment planning and surveillance, and national guidelines support the use of MRIs for identifying breast malignancies. However, the guidelines are targeted for particular indications such as among women who already have breast cancer risk factors.

Because the method is more expensive than standard mammography and can lead to higher false-positive results, its use should be carefully tailored to the right woman and the right time.

A more cost-effective biopsy method combines two different imaging techniques (MRI and ultrasound). This alternate technology was developed by scientists in Germany. In order to make it work, researchers had to develop new components, so that the ultrasound would be able to withstand the strong magnetic fields generated by the MR scanner.

By combining these methods, the patient would only have to enter the scanner once. The doctors would then be able to use the MR image to guide the biopsy needle to the exact spot displayed on the screen.

With all the screening involved, it is not surprising that the benefits of screening (or lack thereof) would also be on the forefront. At a meeting of the European Breast Cancer Conference, the global burden of breast cancer was presented.

Over 1.6 million cases of breast cancer are being diagnosed, and the incidence has been increasing at an alarming rate of 3.1 percent with 450,000 deaths worldwide each year. In low-income countries, almost all women diagnosed were at later stages; whereas in high income countries, diagnoses were at earlier stages of the disease. Since the survival rate is much better when cancer is in the earlier stages, it becomes important that women see a doctor earlier.

But even considering these facts about the increased incidence of breast cancer, the conference presenters also suggested that extending screening programs to women over 70 years old resulted in overtreatment and that the risks associated with treatment did more harm than good.

An encouraging finding coming out of this conference was that engaging in regular physical activity can reduce the risk of breast cancer. In an analysis of 37 studies spanning over 25 years — including over 4 million women — the overall message was that in women not taking hormone replacement therapy, the protective effect of exercise should continue to be encouraged, regardless of age.

"This is a low-cost, simple strategy to reduce the risk of a disease that currently has a very high cost, both to healthcare systems and to patients and their families," said Professor Mathieu Boniol of the International Prevention Research Institute, Lyon, France. "It is good news both for individuals and for policymakers."