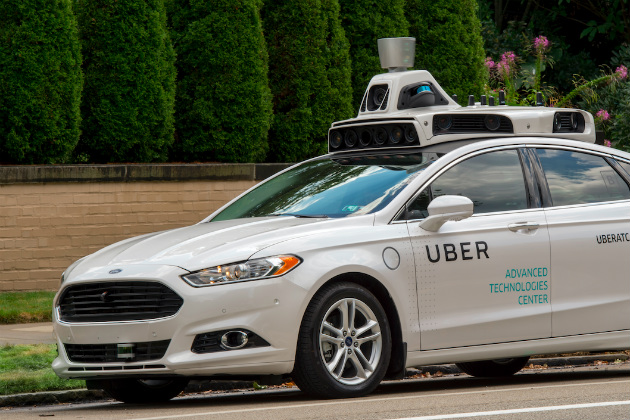 Science fiction has always taken ideas about technology and fleshed them out in detail long before industry could ever produce the real thing.

Artificial intelligence, space travel, robotics, computers, genetics and much more began as abstract fictional concepts. After years of engineering and plenty of trial and error, many of these "fictional" ideas eventually become reality (still waiting on those hoverboards, though).

For years, tech-savvy consumers have drooled about the possibility of self-driving cars that have been promised in futuristic movies like "Logan's Run," "Total Recall," "Demolition Man" and "Minority Report." Now, Google, Uber, Tesla and others have us on the verge of a transportation revolution.

The main benefit of vehicle automation is to take human error out of driving. This promises to drastically reduce the rate of automobile fatalities in the U.S. (which has been steadily dropping since the 1970s, but currently sits around 32,000 per year). It is also expected to speed the flow of traffic and allow passengers a more pleasant ride.

But what about the problems these vehicles may cause once they hit the road? And how will society react to them during the transition?

"The biggest hurdle self-driving cars face is co-existing with human drivers who are very error prone and still think they are perfect," said Bask Iyer, CIO of VMware and also the company's general manager of Internet of Things.

Iyer should know. Through VMware, he is helping car companies manage myriad software updates for their connected vehicles. And as a Tesla driver, he has experienced the early beta version of its Autopilot feature.

He thinks it won't be long before self-driving cars are sold to the public.

"Two years ago, I would have said 10 to 15 years. Now I think it will be five years," Iyer told MultiBriefs Exclusive. "We actually have very good self-driving cars now that seem to be more than halfway there."

Slow as it can be, the pace of innovation is still typically much quicker than the glacial speed of the U.S. government. Once new products come to market, legislators often scramble to deal with the fallout from unforeseen problems. Then, it can take years of bureaucratic morass before they are able to do anything about it.

We've seen it happen time and time again, and the early days of the internet provide a perfect example. Think of all the problems surrounding Napster and digital music piracy in the early 2000s. Cyberbullying has been another troubling aspect ever since the days of AOL chat rooms.

And lawmakers are still trying to sort through both matters.

The good news is they seem to have learned their lesson. Lately, the government has been trying to get a jump on technology. From drones to net neutrality, the feds have attempted to anticipate problems before they happen, rather than respond after the fact with legislation.

That brings us back to self-driving cars.

The Department of Transportation released a 116-page document on Sept. 20 outlining its Federal Automated Vehicles Policy this week. Aiming to "establish a foundation and a framework upon which future governmental action will occur," the policy arrives well before the first autonomous vehicle is sold to the public.

"The culture of fed tech futility has become a culture of fed tech agility as we've seen the government evolve from a stodgy bureaucracy to an early adopter willing to go from 0 to 60 in an instant on self-driving cars, before they're even on the road," Iyer said.

While it may be years before they are sold, autonomous cars are already hitting the road as companies are working out all the bugs with the technology.

Google has been testing cars in California, Tesla continues to tweak its Autopilot feature after a highly publicized fatal accident in May, and Uber just unveiled its driverless fleet of Ford Fusions to the public in Pittsburgh last week.

The vehicles still have plenty of kinks to work out — like driving in the snow where visibility is limited — but there are still plenty of other hurdles to clear once the cars are technologically ready.

"If a car malfunctions and causes an accident, who is responsible? Is it the manufacturer? The driver? The computer's software? This obviously also raises questions for the insurance industry and how motorists are insured and protected," said Attorney Marc Lamber with Fennemore Craig, P.C., a thought leader in the self-driving cars revolution.

"Ethical considerations will also have to be made — and science-fiction like scenarios like 'Does a car roll over and take the driver's life rather than hitting 10 people in a crowd?' will be studied."

Cybersecurity is another concern. As cybercrime has disrupted businesses and industries across the globe with alarming frequency in recent years, security firms are always a step behind the criminals.

In July 2015, automakers saw firsthand the trouble hackers can cause to vehicles when WIRED magazine illustrated how a Jeep Cherokee could be shut down remotely while driving on the highway. Should that occur to a car today, a driver sitting behind the wheel could take control and guide the vehicle to safety.

But what would happen if it were a driverless Uber vehicle? Could the passenger take over the disabled car in time to ensure his/her safety?

Increase that hack to a larger scale, and we could have a catastrophe on our hands.

"Imagine if a cyberterrorist hacked into a major automated trucking line and used these vehicles like missiles of destruction against prime targets," Lamber said. "As with all new technologies related to the Internet of Things, just the thought of the power grid going down could have immeasurable consequences."

That's why having a framework (followed later by more specific regulations) is so important to guiding the autonomous vehicle industry as it moves forward rapidly in the next 5-10 years.

"There is admirable foresight in crafting and setting an early framework to work with the private sector to set responsible guidelines for this technology to grow, avoiding a Wild West scenario," Iyer said. "Nobody responsible in or out of government wants that type of environment."

By being proactive instead of reactive, the federal government is helping usher the transportation industry into a new generation.

However, no word yet on those hoverboards ...