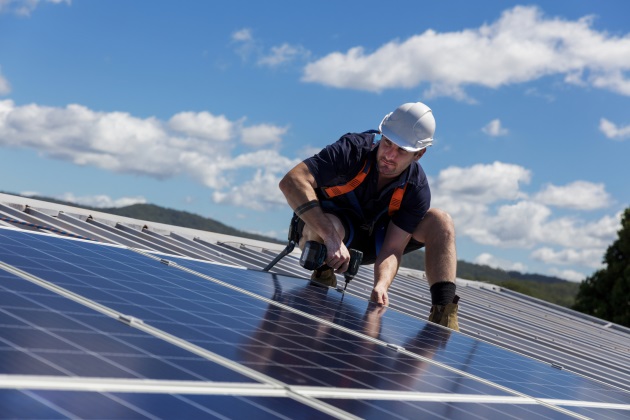 A hole in the ground that recently contained nothing but our post-consumable unmentionables is receiving a new life as an energy production facility in Maryland. In Fort Washington, a landfill has been transformed into the state’s first large-scale community solar farm, NPR affiliate WAMU-FM reports.

Conceived in 2017, the transformation is the result of a pilot running through next year, which is designed to “expand accessibility to solar energy for state residents,” WAMU-FM says. The program is more than a paved over of the previous pit with solar panels. A community-based effort, residents of specific areas can purchase or lease a share in the solar project.

Each month, these residents receive credits on their electricity bill for the energy produced by the facility. The three-year program is producing about 196 megawatts of solar capacity allocated to community solar farms in the state.

A solar consortium, Neighborhood Sun, drives the pilot. The effort is what's known as a community solar panel providing “locally produced, affordable clean energy without any equipment to install or upfront fees,” the company’s website says. “Anybody who pays an electric bill can subscribe to a solar project in their area."

The project is just one of Neighborhood Sun's undertakings. It is on the hunt for solar projects with the hope of producing jobs, affordable power, and enhancing the local environment.

The energy produced by the solar project flows directly into the electricity grid, and the company doesn’t install anything in a customer’s home. When the sun doesn't shine, customers get the same power they always have because the utility continues to serve as the member’s electricity provider.

During the customer application process, the provider calculates the user's average monthly electric usage based on historical usage of the past 24 months. Customers gain access to a percentage of the solar credits the project produces, which is intended to provide the calculated average amount of kWh used each month.

Unused energy credits roll forward for future use. If patrons use more energy than the monthly credits, rollover credits kick in, and the customer pays the utility the difference that month.

The transformed landfill near Washington, D.C., is the state's first large-scale community solar farm through the program. It produces enough energy to provide power to more than 1,000 homes.

As of September, two more solar projects are soon to debut. One is in the final stage of inspection, and another project is nearing completion.

Gary Skulnik, the CEO of Neighborhood Sun, told WAMU that the landfill is an ideal site for the new farm because it's "not an area that can be used for anything else, so it's the perfect place for a solar farm."