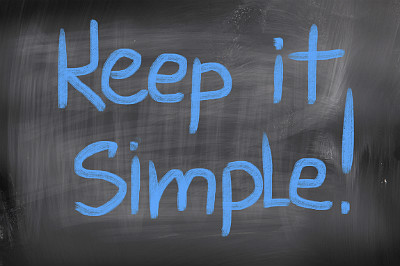 Your prospects are bombarded with persuasive messages — 400 per day, according to psychologist Kevin Dutton. Moreover, research shows that 81 percent of those messages contain more written or verbal content than is necessary, encouraging audiences to tune out, gloss over and move on.

It's time to streamline. So before allowing the kitchen sink to be tossed into your next proposal, presentation or marketing document, point out these four reasons to keep your messages short, sharp and simple.

In today's digital world of information overload and short attention spans, the credibility conveyed by simple messaging is greater than ever. In fact, a series of five studies at Stanford University found that people consistently trust the strength and accuracy of content more when it contains simpler language.

From advertising to politics to sales and marketing, many of today's most effective, trusted messages can be boiled down to just one word. One word!

For instance, what companies come to mind when you read "search" and "priceless"? Did you think of Google and MasterCard? Now that's powerful. But let's try it again. What company comes to mind when you read "the capability and qualifications to utilize world-class experience and expertise in delivering top-notch service that gets you to the next level"? Anything? Me neither.

Advertising executive Maurice Saatchi recommends that companies "define the one characteristic they most want associated with their brand around the world, and then own it." While you may not be able to boil down the message of a proposal or presentation to one word, the exercise is worthwhile for your overall document and each key message.

After all, when your prospects are thinking about the ideal outcomes of an upcoming project, what company do you want springing to mind? Better simplify those key messages.

2. People hate fluff and wasted time (but rarely tell you)

Much of the sales and marketing content I see contains meaningless, irrelevant phrases and sentences, also known as fluff. And it's not hard to understand why. Fluff is a comfort blanket, an easy way to fill a page with positive-sounding "substance." Unfortunately, this more-is-better approach nearly always makes a negative impression.

Let's look at the research. A recent study of sales presentations found that 75 percent of prospects don't like "gushy" content. But it gets worse. The same study found that 99 percent of those prospects will not bother to stop you when they're annoyed by it. They'll just sit there, irritated and tuned out.

Further, a study by the Persuasion Institute found that fluff results in 93 percent of prospects misunderstanding at least one part of your message, with most never seeking clarification. Ultimately, they're left frustrated and confused — not a recipe for persuasion.

Your prospects are busy people, so they want to quickly get the information they need and move on. They want you to keep it simple. So as part of your content review process, take the time to cut any unnecessary jargon, empty claims and weak verbs.

3. People have a natural bias for simplicity

Even our brains don't like their time wasted. In effect, they're hardwired to take shortcuts to the simplest conclusions possible. Don't believe me? Try the following exercise, courtesy of Split-Second Persuasion. Cover up the numbers below, then work your way down to reveal one at a time as you add them up in your head.

What’s the total? Most people’s first instinct is to say 5,000, even though the answer is actually 4,100. The reason is that once you reach 4,090, your brain expects that the total will be a simple, round number, hence the jump to 5,000.

Here's another one. Take a minute to write as many words as possible with the pattern _ _ _ _ _ n _. Now do the same thing with the pattern _ _ _ _ i n g. Most people come up with more for the second pattern, but they shouldn't. There are actually many more words with the first pattern. The reason is that the common suffix "-ing" allows words to more easily spring to mind. The challenge is simpler.

The point: Your prospects' brains work in much the same way when processing content in a proposal, presentation or marketing document. If you keep it simple and straightforward, they're likely to remember it, pay attention to it, and take the mental shortcuts you want them to.

Speaking of brain activity, you'd be surprised at how limited your prospects' short-term memories are when reading or listening to your information. Studies by the Persuasion Institute found that while the average company communicates 6-8 features/benefits of their service to prospects, only 1-3 are actually retained. Even worse, 40 percent of prospects remember a feature/benefit incorrectly, and 30 percent remember a feature/benefit that was never mentioned.

Your prospects process lots of information from you and your competitors, particularly during the proposal/presentation process, so keep the focus of your content to a limited number of simple, key messages — the most important benefits your prospects will receive by working with you.

And exactly how many key messages/benefits should you deliver? Stay tuned, as I'll be tackling that question in an upcoming article.