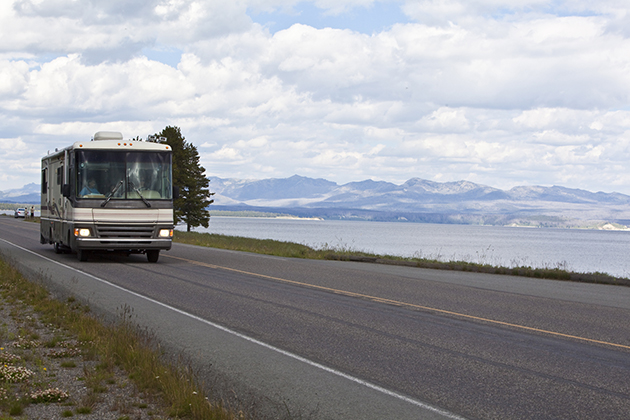 America's national parks are always a good choice for a family getaway, but in my mind Yellowstone tops the list. I'll say from the start that I'm biased, having grown up in Cody, Wyoming, just an hour's drive from the park's East Entrance.

I visited the park many times, from age 4 through my teens, and I have returned on several occasions as an adult. The park was my Disneyland as a kid — and it continues to amaze and excite me in my seventies.

I'll back my contention with a number of reasons why Yellowstone has such great family appeal, but let's first review some facts about the park.

Yellowstone is the world's first national park. It was established in 1872 by an act of the U.S. Congress signed into law on March 1, 1872, by President Ulysses S. Grant. It also was one of the first 12 sites named as a UNESCO World Heritage Site in 1978.

Named for the river that runs through it, Yellowstone occupies 3,472 square miles (about 2.2 million acres). That's larger than Rhode Island and Delaware combined. All but 3 percent of the park is located in Wyoming with the remaining snippets edging into Montana and Idaho.

The park sits atop one of the world's largest volcanoes. The first major eruption of the Yellowstone volcano occurred 2.1 million years ago and covered nearly 6,000 square miles with ash. That was one of the largest eruptions the world has ever known — but don't let it frighten you away.

While the volcano is still active, it has been about 70,000 years since the last lava flow. You can rest assured in knowing that the National Park Service constantly monitors volcanic and seismic activity in the area and will issue warnings should there be any threatening uptick in activity.

The volcanic nature of the park is, in fact, one of the major reasons behind its broad visitor appeal. Yellowstone has more than 10,000 geothermal features — geysers, mudpots, steam vents and hot springs — constituting half of all the known geothermal features on the planet. Best known and by far the most iconic of those features is Old Faithful Geyser, erupting on average every 92 minutes. Spewing steam and water as high as 180 feet, it draws the park's largest crowds. 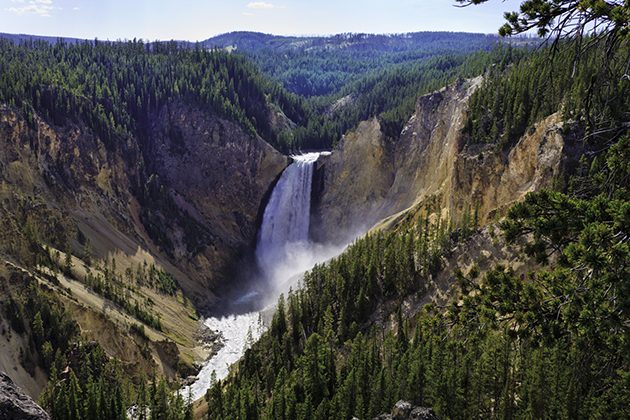 
Among the park's other main attractions — all easily accessible by car and/or short hikes — are Yellowstone Lake, North America's highest alpine lake at 7,732 feet, which feeds Upper and Lower Yellowstone Falls, a roaring series of cascades 109 and 308 feet tall respectively.

Below them is the Grand Canyon of the Yellowstone. This awesome chasm — more than 1,000 feet deep, between 1,500 and 4,000 feet wide and 24 miles long — was carved out over the ages by the Yellowstone River. Its steep walls are dramatically colored by oxidizing mineral compounds.

Kids will tell you, however, that it is wildlife they most want to see. Known as the "American Serengeti," Yellowstone is home to the largest concentration of mammals in the lower 48. Some 67 species of mammals inhabit the park along with an estimated 320 species of birds and 16 types of fish. But it is the beasties — especially grizzly bears, bison, wolves, lynx, fox, moose, elk and deer — that most excite visitors. 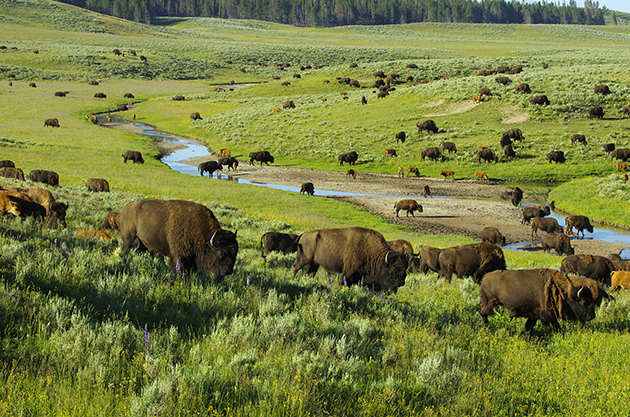 Known as the "American Serengeti," Yellowstone is home to the largest concentration of mammals in the lower 48.


In addition to wildlife watching and sightseeing, there are many other things to do on a Yellowstone family vacation during the summer months including horseback riding, fishing, boating and hiking — the latter on more than 1,000 miles of backcountry trails.

The park remains open during the winter, albeit with limited access, services and lodging. Winter recreation focuses largely on the managed use of snowmobiles and snow coaches, but cross-country skiing and snowshoeing are options for hardy, athletic types. Be aware, however, that extremely heavy snow and subzero temperatures can pose a real challenge for winter visitors.

Yellowstone National Park Lodges operates nine lodges in the park with more than 2,000 rooms. All are open from late spring through the fall, but only two are open in the winter: Old Faithful Snow Lodge and Mammoth Hot Springs Hotel & Cabins. Additionally, there are 12 campgrounds scattered about the park with some 2,000 campsites, not to mention a variety of backcountry sites. 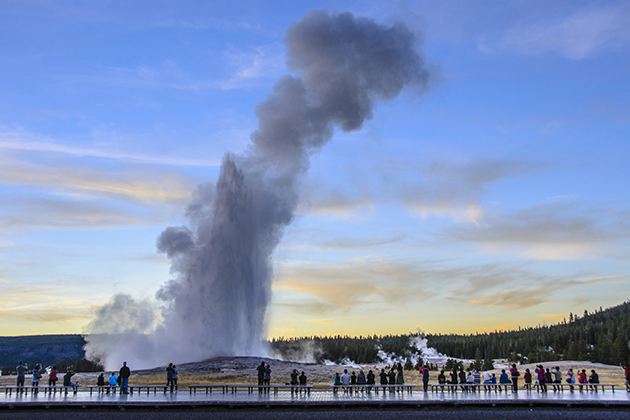 
RV camping is available at all park campgrounds for rigs up to 40 feet — except Mammoth, which can accommodate RVs up to 75 feet. But only Fishing Bridge Campground has full hookups. You might want to try your luck at Passport America's Yellowstone Valley Inn & RV Park. It's the closest RV park to the East Gate, located in the Wapiti Valley near Cody, Wyoming, 32 miles from Yellowstone.

The only major problem facing prospective Yellowstone visitors is securing reservations at park lodges and campgrounds. More than 4 million people visit the park annually, and almost 3 million of those pour in during June, July and August. Consider the number of rooms and campsites available, and I'm sure you get the picture. Accommodations in surrounding communities are nearly as scarce during the summer. In either case, reservations generally must be made more than a year in advance. 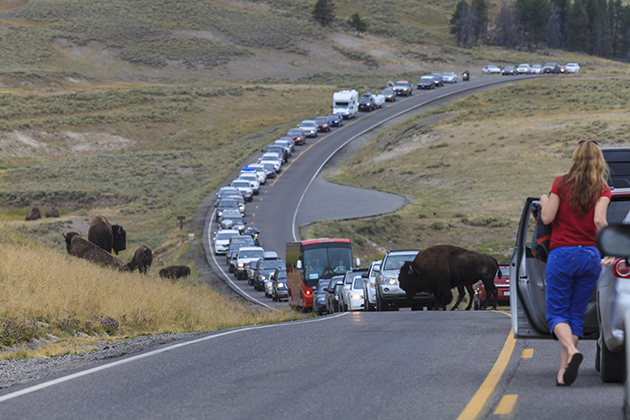 More than 4 million people visit the park annually, leading to large traffic jams when animals venture onto the roads.


I can suggest a solution — both to the lodging dilemma and one that can make your Yellowstone family vacation more seamless and less stressful as well: join a guided tour. The best one I know about is offered by Austin Adventures, a family-owned company based in Billings, Montana. Austin has been conducting small group family tours in Yellowstone for more than 25 years. They know the park like the proverbial back of their hand.

Austin guides understand the park's often-congested traffic patterns, and they know the best times to visit the various attractions. Most importantly, they have lodging contracts that guarantee rooms for their guests. Restaurant reservations are all handled as well.

Austin's six-day/five night Yellowstone tour, including just about everything except airfare, is priced at $2,698 per person, with discounts for children under 11, and there may be special offers available, so check with the company for details.