Would you live in an airport city? 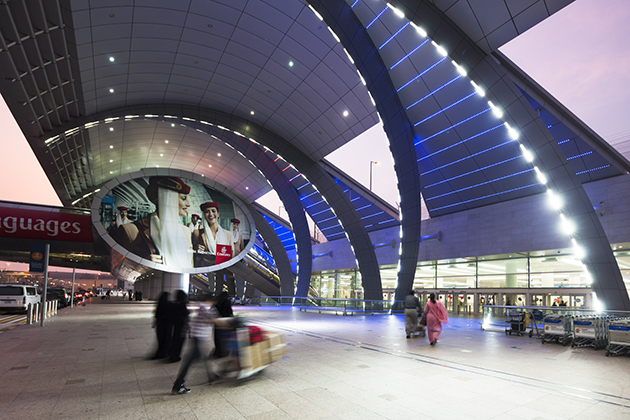 Dubai features one of the world's largest airports.

The Polish winner of the Man Booker International Prize wrote in her winning novel, on the subject of airports, that “soon we well may say that it’s the cities that supplement the airport, as workplaces and places to sleep. It is widely known, after all, that real life takes place in movement.”

Indeed, settlements have, through the history of civilization, sprung up around transport nodes — whether that is early settlers along the edges of a river, the Victorian-era railroad cities in the U.K., or port cities like New York.

However, the more ambitious concept of the airport city, or “aerotropolis,” is now gaining momentum — a city that sprouts up along the key transport hub of our age, the airport. Ground has actually been broken on airport cities in cities like Songdo in South Korea. But would you live in an airport city?

The rise of the “aerotropolis” might be seen as transit-oriented development for the high-speed age. Throughout the last century and the early years of this one, our cultures have increasingly been organized around speed. Everything arrives quickly at the touch of a button, and cars and airplanes whizz us from one location to another at unprecedented speeds.

So perhaps airport cities just require a bit of imagination? Maybe. But there are a few tripping points.

The changing role of the airport: from runway to multi-functional hub

Early airport cities were conceived as hubs of commerce — logistical hubs like the one FedEx set up its “superhub” at Memphis Aiport. They have been buying up more and more land around the airport ever since, which sits at the heart of the company’s “hub and spoke” delivery model. Where they trod, many followed.

As airports expanded, some settlements cropped up to provide accommodation for the armies of people working at the airports, as well as airport hotels. Next, other functions were added on — a branch of the Rijksmuseum opening at Amsterdam’s Schipol airport, and even the sprouting of wedding chapels and venues.

But these remained ad-hoc, “add-on” measures, targeted as those passing through. Only more recently have people started talking about really shifting the center of gravity and actually using airports to anchor new cities. This has led to a number of mixed-use masterplans that contain residential communities.

These airports represent a real sea-change from how things have been done before. Because airports caused so much noise and disruption, they have generally been sites on empty parcels of land far from neighbors who can complain about them — see London Heathrow’s expansion plans for a case in point. San Diego is an outlier, where the airport is bank in the city center.

Business school professor John Kasarda has been the man tracking the development of the “aerotropoli” and cheerleading for them.

He cites pioneer airport cites, which have often been concentrated in the Middle East and Asia. Dubai’s Festival City is on the fringes of one of the biggest airports in the world.

Songdo, in South Korea, is a so-called “smart city” built on reclaimed land, complete with universities, multinational firms, high-rise living, its own “Central Park” and a world-renowned golf course. But closer to home, Dallas-Fort Worth has also been investigating its own aerotropolis model.

‘Placemaking’ in an airport cities

The biggest obstacle with airport cities is that “placemaking” is a huge challenge. The way they have to be set up goes against so much of the “placemaking” wisdom we have built over the years — which nudges us toward the human scale and mixed neighborhoods.

Can a “community that is based on the global delivery or goods and services” ever really be anything other than “placeless”? And can airport retail malls ever really fulfil all the social and practical functions of a main street?

A Jack Nicklaus golf course doth not make a place.

A big concept in urban design today is that of “permeability” — how people are able to move along a number of routes, unobstructed, through a neighborhood or a city. The large, impermeable housing estates we have been building in the 20th century are not up to scratch, but neither is large airport infrastructure.

You cannot build a grid of walkable streets around a set of runways. There are serious doubts about the ability to place cumbersome and impermeable airport infrastructure at the heart of a city, replacing the role of the high street.

Getting our priorities right

Beyond all of this, perhaps the biggest concern with airport cities is that, in an age of increasing isolation and lack of community, they seem to amplify so many of the things that make our cities more alienating.

We also need to reconsider whether the ways of life these new cities are enabling are really the ones we want to be encouraging — being able to fly across the country for a meeting and return back for dinner in the evening?

Or travelling to India for medical tourism from your front door? We can fit out our airports with as much LED lighting as you want, but the reality is that carbon emissions from aviation are the fastest-growing contributor to global climate change.

Advocates of these cities like to quote modernist planners like Le Corbusier to market their cities as places based on speed, apparently ignoring the quality of life and environmental questions they provoke. Those cities celebrated for their high quality of life — places like Vienna, Zurich and Vancouver — are the antithesis of these new from-scratch creations.