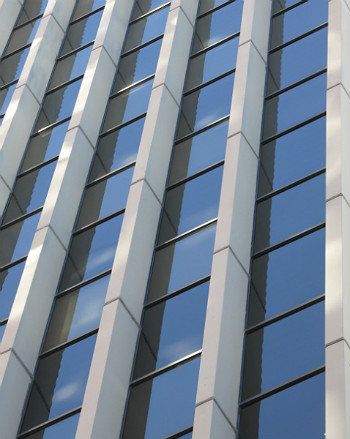 You can spend a lot of time analyzing building system performance, looking for ways to reduce energy use and improve efficiency in HVAC equipment, lighting systems and the building envelope. As you work hard to prolong equipment life, reduce utility bills and lower operating costs, consider high-performance, low-e window film as a solution.

The right window film not only reduces energy use year-round and improves tenant/occupant comfort, but also helps you make the best of your building systems and protects against unnecessary upgrades or replacements. Here’s what high-performance, low-e window film can do:

The California Energy Commission estimates that 40 percent of a commercial building’s cooling requirements are due to solar heat gain through windows. Improving this exterior element can keep heating and cooling systems from running as long or as often.

To prove this point (and to measure energy-efficiency value from low-e window film), the Hyatt Regency Houston recently installed low-e window film in 48 of its guestrooms. The rooms were located on the southwest and southeast sides of the building (areas receiving the most complaints about uncomfortable temperatures).

HVAC runtime was also significantly reduced; a system that once couldn’t keep guestrooms cool enough now easily fulfills the building’s needs. The high-rise hotel expects an ROI in 3.6 years as a result of these savings.

Low-e window film can also shrink plug load. Because it reduces hot spots and cold spots throughout a space, tenants and occupants located near windows may not need to run fans and space heaters as often to stay comfortable.

In the Hyatt Regency Houston study referenced above, the hotel found that window film reduces daytime temperatures near the inside of the windows by 30 to 40 degrees F during hot summer months.

The U.S. Department of Energy says that 25 percent to 35 percent of wasted energy in commercial buildings is due to inefficient windows. Long recognized as a way to control glare and reduce solar heat gain in warm months or climates, today’s high-performance, low-e window film improves window insulation year-round in all types of climates.

Installing window film can also help cut back on lighting costs. When solar heat gain and glare aren't controlled, tenants and occupants use blinds and shades to stay comfortable by reducing the amount of natural light coming in. Blinds and shades do control glare and solar heat gain, but they also restrict views and can cause a need for more artificial lighting.

According to the U.S. EPA’s Energy Star Building Upgrade Manual, 5 percent of electricity in the United States is used to counteract waste heat generated by lighting systems. When window film allows controlled daylight into a building, lighting systems can frequently remain off or dimmed, which also reduces HVAC loads.

Despite the misconception that window film makes spaces too dark and increases lighting requirements like blinds and curtains might, it actually does quite the opposite.

A study conducted by University of Padua in Italy looked at the MG Tower’s use of window film and the effect on lighting. This modern high-rise office building had up-to-date HVAC systems and low-e glazing on the windows. However, occupants still felt the effects of solar heat gain and glare. The University of Padua research team found that window film installation addressed these problems, and also provided a significant increase in useful daylight (and in occupant comfort and satisfaction).

Steve DeBusk is a global energy solutions manager at Eastman Chemical Company. DeBusk has 29 years of experience in the energy efficiency business. He is a certified energy manager, a certified measurement and verification professional and a certified sustainable development professional. You can visit his blog at blog.vista-films.com or follow him on Twitter @greenbldgs.