Why you should stop trying to get better at multitasking 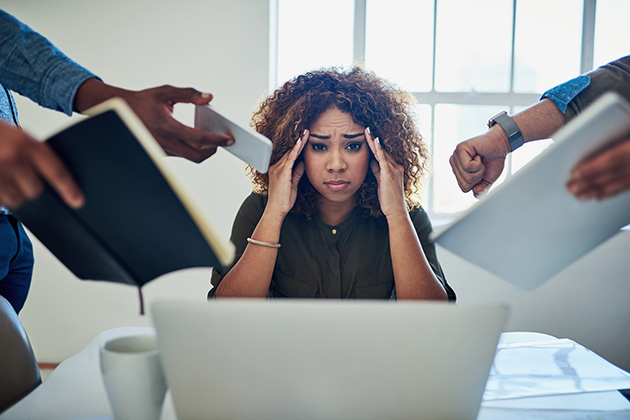 There aren’t enough hours in the day for everything you want to do, and this realization leads many people to multitask. However, multitasking can actually be counterproductive. While you may consider yourself an exception to the rule, the science and the experts disagree.

Exhibit 1: In a Stanford University study, people who frequently engage in multitasking — and think they’re excellent multitaskers — shift back and forth so often that it negatively impacts their ability to distinguish between important and irrelevant information. Over time, they can’t even focus when they’re not multitasking.

There are times when multitasking can be beneficial; for example, listening to music while you exercise. And, according to Dr. Natalia Peart, clinical psychologist, founder and CEO of Catalyst Innovation Group, and author of "FutureProofed: How to Navigate Disruptive Change, Find Calm in Chaos, and Success in Work and Life," creative thoughts seem to flow when you’re walking or taking a shower.

"But, as a general rule, your mind can only effectively focus on one task of the same type at a time," she says. "So, despite what we all think, we’re not good at doing two things that require the same brain attention at the same time."

Are you serial tasking?

You might consider yourself pretty good at talking on the phone while composing or replying to email messages. "While you think you’re multitasking, what you’re really doing is typing part of an email, then stopping and switching to your phone conversation, then stopping and returning to your email, and so on," Peart says.

Not only will it take you longer to finish, Peart says you won’t be as accurate, since you’re taxing your brain by constantly refocusing with all of the switching back and forth. "This is really considered serial tasking in rapid succession, not multitasking," she explains.

In fact, a study by researchers at the University of London’s Institute of Psychiatry found that electronic multitasking (like sending an email while talking on the phone) produces a temporary 10-point IQ drop.

Multitasking can lead to burnout

When you add tasks that tax the brain in the same way, Peart says it can cause performance on each task to deteriorate.

"And once you have been distracted from the original task, it takes the brain as long as fifteen minutes to refocus," she explains. "Not only are you less — instead of more — productive, but your long-term memory and creativity can also be reduced."

Multitasking can also cause mental exhaustion. "We multitask as a way to dig ourselves out of the cycle of stress and burnout that is plaguing so many of us today, but instead, it is doing quite the opposite — it just makes our stress and burnout even worse," she says.

"The cycle we are finding ourselves in with constant serial tasking is that we do this for a while, but find we are not being productive enough. Then we look to more tools to help us become even more productive, because we’re convinced we just need to squeeze more in with less time."

A majority of executives (57%) in a study by The Creative Group felt that multitasking improves productivity. A meager 16% believe that they’re less efficient when multitasking.

"There’s no question that technology makes it easier than ever for professionals to multitask," says Diane Domeyer, executive director of The Creative Group, a division of Robert Half. "Think how often you’ve responded to an instant message during a meeting or conference call, even when you know you shouldn’t have."

In addition to unnecessary errors and stress, Domeyer says multitasking can impede your ability to think clearly and strategically. "And, the fact is, most people are unable to successfully attend to more than one thing at once."

Ease yourself away from multitasking while being productive

According to Peart, your brain can only focus for 90 to 120 minutes before it needs a break. "That is why when you need to rest, your body sends you clear signals such as fidgeting, hunger, drowsiness, and loss of focus."

Many people respond with caffeine and sugar. "The problem is that we then become addicted to the adrenaline rush, because we never fix the real problem — we just treat the symptom."

Instead, she recommends seeing your tasks as a series of sprints, where you take breaks after these 90- to 120-minute cycles. "You will be more productive if, at the end of these cycles, you take a few minutes to step away and disengage from mentally challenging tasks, giving your brain time to rest and recover."

Another way to boost your energy is by including daily activities that you find engaging. "I’m talking about moments when you are flowing, when you are so completely engaged in an activity and so completely in the zone it seems you have expanded time," Peart says.

"That sense of being so deeply absorbed in your experience, so fully engaged, is what also allows you to lose track of time completely," she explains. "You can leverage the energy you create from these deep experiences to restore the energy reservoir that is often depleted in the other areas in your life."

But you won’t always have work so engaging that you lose track of time. Domeyer provides tips for positive outcomes in those scenarios.

Get your to-do list in order. Ranking your priorities can alleviate a self-inflicted pressure to do everything at once.

Domeyer recommends identifying all the tasks you must accomplish for the week and assign priorities. Don’t let distractions or multitasking interfere with your progress on items that must be completed that day.

Group similar tasks together. Multitasking can be especially inefficient when you’re bouncing from one project to another.

“Block off chunks of time on your calendar to handle tasks that complement each other and, ideally, achieve a larger objective,” Domeyer explains. For example, you might work on several to-dos for a new website (reviewing user research, creating wireframes and designing mockups).

Find your sweet spots. Routine multitasking can sometimes provide a much-needed mental break during the workday.

"Are there certain tasks you can do simultaneously without making a critical misstep? For example, you might be able to organize the files on your computer desktop while listening to a recorded conference call," Domeyer says.