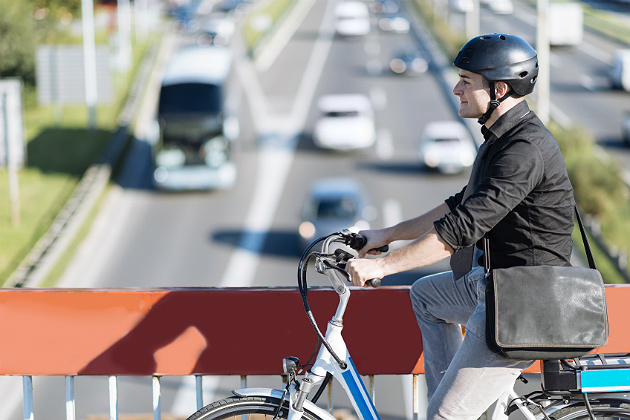 While the electric car craze has filled pages of newspapers and magazines, our attention has been distracted from where the real momentum should be building — electric bikes. China, where e-bike sales have been outstripping car sales, has its eye on the ball.

The regulatory framework has some catching up to do, but faced with mass urbanization and an environmental crisis, it is e-bikes that really have the potential to reshape our cities.

The rise of the e-bike

When it comes to cycling, Northern Europe has long been streets ahead of the U.S., cementing a cycling culture little by little thanks to consistent government support over decades. Cycling has become so popular in Denmark that tech is having to be employed to deal with bike traffic jams in Copenhagen. That pedal power has been one factor helping Denmark achieve adult obesity rates of 19.3%, compared to the U.S. 33.7%.

Most e-bikes today are what are known as “pedelecs” — that meaning they won’t move unless you are pedaling, and the power of the assisted motor merely echoes your own efforts.

The broader possibilities that an e-bike represents for getting around your daily routine is what is causing sales to take off. The market is evolving, and the latest iteration — the S-pedelec or “speed pedelec” — can travel at speeds of nearly 30 mph. That offers another change, but comes with its own complications.

However, in countries like the U.K. and the U.S., where cycling cultures are emergent and often sporadic, bikes still remain predominantly for recreational purposes rather than or practical journeys like commuting. Cycling here perhaps brings to mind images of lycra-clad titans and Lance Armstrong more often than casual trips to the shops, and that perception seems to change only slowly. As a result, a perception that e-bikes are "cheating" compared to traditional bikes is reportedly limiting sales.

What is behind the spike in e-bike sales?

Crucially, e-bikes iron out some of the niggles and inconveniences that stop people from using a traditional bike. One of those for commuters is the fear of arriving at the office drenched in sweat.

Another, for the older or less mobile, is the ability to “take the hills out of cycling” and to keep active into later age. E-bikes also imply much less red tape (so far), meaning no taxes, mandatory insurance or onerous regulations.

That is a big draw in places like the U.S. and Europe. In contrast in China, Southeast Asia and Brazil, the rocketing sales of e-bikes are largely down to their combination of low costs (compared to the private car) and the break from the fatigue of long journeys. Far from the marketing images of the hip Dane cruising through the city with her motor gently whirring, in China the bikes have long appealed to low-income citizens who may live several bus rides away from work, or migrant traders and workers who can strap their drills to the frame.

But there is a more far reaching impact. E-bikes fundamentally expand the radius of the potential daily commute. While only the most ardent bike-lovers will commute more than 10 miles, an e-bike can expand that to an easy 15-20 miles while barely breaking a sweat and producing minimal carbon emissions.

Just as the advent of new transport modes like the train or the combustion engine have shaped our urban form in the past, a significant take up of e-bikes has the ability to reshape it, by allowing homes to be developed more sustainably at longer distances from employment centers or from transport nodes in our expanding cities.

The irony has been pointed out that many electric Chinese bikes are fueled by electricity from coal-fired power stations. The battery is also a key limiter — many Chinese bikes still run on lead-acid batteries, with serious environmental implications. The new generation of models run on more friendly lithium-ion batteries, but they come at a price.

The heft of e-bikes is another obstacle for some. Faced with a set of steps, hauling an e-bike up them is no mean feat, although the tech is improving here, too.

Can regulations keep up?

From a regulatory point of view, the popularity of e-bikes in some countries has led to a puzzle for regulators. When does an e-bike stop being a bike and become a scooter? Or a motorbike? At what point do we start regulating… demanding helmets, insurance and tests of roadworthiness?

Their popularity is forcing a rethink of the contentious question of how we allocate our road space. Should these bikes be allowed to use segregated bike lanes, or are they so powerful they should instead be sharing space with their close cousin the car?

Several Chinese cities initially reacted to chaotic rule-breaking by e-bikers by banning them outright, as did New York in 2012. Europe in 2017 was finally catching up — requiring that if a pedelec is assisted by a motor beyond 15.5 miles per hour, then it should be taxed, insured and riders should wear a helmet.

While we have been looking the other way and drooling over Teslas, the rest of the world has been getting on their (e-)bike and getting on with their commute. The arrival of new transportation technologies through history — whether it has been the bicycle, the railways, the combustion engine, or the specter of autonomous vehicles — should always cause some reflection on how our cities work, and the e-bike is no different.

Crucially, e-bikes take up a fraction of the space of the cars on our roads. Even if electric cars might resolve the emissions problems of cars, they will not resolve the problem of congestion, or levels of car ownership that have turned our cities into giant car parks.

E-bikes are a step change for both the environment and congestion. They can also recharge using a standard plug socket rather than complex charging infrastructure. And they might help us do that in a much more inclusive way. Oh, and no, it’s not cheating.