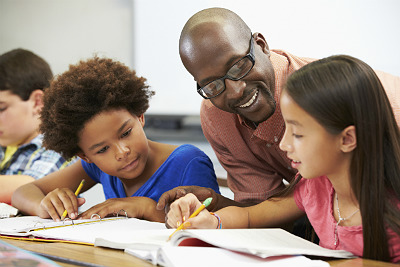 Language acquisition comes under the field of psycholinguistics: Children learn L1 without any active intervention. It is a natural process, as Betty Birner points out:

"Children acquire language through interaction — not only with their parents and other adults, but also with other children. All normal children who grow up in normal households, surrounded by conversation, will acquire the language that is being used around them. And it is just as easy for a child to acquire two or more languages at the same time, as long as they are regularly interacting with speakers of those languages."

"Children can spend more time and effort on learning than adults who have many competing demands," writes Monika Schmid, Professor of Linguistics, University of Essex. "The motivation for children to fit in is much higher, and the habits of pronunciation and grammar of their first language are less deeply ingrained and thus easier to overcome. And, of course, all learning gets harder with age."

Even babies have a sense of grammar based on the sounds they hear, according to Yudhijit Bhattacharjee in National Geographic. The order of sounds is the base upon which grammar is built: "That the baby brain responds from day one to the sequence in which sounds are arranged suggests that the algorithms for language learning are part of the neural fabric infants are born with."

When one learns his or her native language (L1), a progressive acquisition process occurs.

A baby goes through a babbling stage where all potential human sounds are produced. This first stage is universal across different languages. The infant is experimenting with making sounds and gradually adds sounds to the "repertoire."

Later, the field of sounds becomes language-specific and is narrowed as the child fine tunes the produced sounds to match the sounds he hears. The child maintains the home language sounds and drops the sounds that do not fit — a nonhearing child will go through the same stages using sign language if exposed to signers at an early age.

Thus, a child hearing English will learn to produce English sounds and not Arabic sounds such as /x/ (pronounced kha). A child exposed to Arabic will learn to say /b/ and not /p/, which does not occur in Arabic. Children learn the linguistic systems by breaking them down into components then recombining them.

New words — especially company names — can be "invented," but they must follow the phonological rules. That is why we have Exxon /ekson/ not /echstzon/.

That is why children learning English as a first language will sound like they are speaking, but the listener will not be able to make any sense of it.

The child constantly experiments, formulates rules and revises as he learns more language. The child has now sorted the sounds out and is beginning to attach meaning. The child enters the one-word or holophrastic stage.

In English, the stream of sounds may contain "mama" or "dada," for example. The child may give a new word a broad meaning — for example, calling all adult males "daddy" or using the word "dog" for other animals.

Breyne Arlene Moskowitz points out one child who used the word "mooi" for "moon" but extended the meaning to cake, round marks, shapes and the letter "O." In this case, the general semantic extension was shape.

In the one-word stage, the words are primarily concrete nouns and verbs. At first the stimulus is present; later the child may ask for something that is unseen. Children at this stage can understand a lot more than they can express.

The child then moves from a one-word stage to a two-word stage with two-word semantic-syntactic relations like possessives — "mommy sock," S+V as in "cat sleeping" or Vb+O as in "drink soup."

Another example from "An Introduction to Language":

Note that the child does not express tense, number or person. Pronouns are rare but not totally absent. "Me" is usually the most popular pronoun.

There is no three-word stage. Children progress from the one- and two-word stages to telegraphic speech using mainly nouns and verbs. The short, simple sentences lack function words and inflections. The words are not randomly strung together; they show an increasing grasp of the underlying rules:

The past forms are added later after the present and the continuous. The different forms of negation are also added as the child continues to acquire the rules.

The child is not merely imitating adult speech. He or she may learn an expression or phrase at times as a whole unit of language, but the majority of utterances are produced by the child's emerging grammar. The following phrases could not be mere imitation:

Word order, rather than the underlying grammar, dictates meaning.

Children's speech at this stage lacks function words and morphemes (articles, "-ed" on verbs, prepositions, etc.) They may say "goed" for went or "doed" for did. They apply their limited set of rules to come up with new utterances based on current knowledge.

In like manner, plurals are acquired. In the first stage, a child may say "two cat" or "one feet" since the concept of plural has not yet been acquired. When plurals begin to appear, overgeneralization may result in errors such as "foots," for example. The rules are gradually sorted out; the child learns /ez/ as in "houses," "horses" or "churches."

By the age of six or seven, the child has the basic L1 linguistic competence, but some errors may still occur. Children are born with the capacity for acquiring langage; they internalize the rules as they understand and produce sentences they have never heard before.

Second-language learners go through a process similar to that of L1 learners. The learner begins by labeling known objects in the new language. As in L1 acquisition, students learning ESL will start using single-word units. In a school, they would be the obvious classroom items and tools in everyday use.

By the use of "bridging," students tie L1 concepts to L2 concepts, and through the process of "binding" the learners link the meaning to the form in much the same way they learned their first language, according to Tracy David Terrell. Like L1 acquisition, L2 acquisition tends to occur as the learners use the language and gradually build up their grammatical competence based on the input received.

The major difference is that older children and adults can monitor their speech and writing and apply the rules they have learned to self-correct their language production, according to Stephen D. Krashen. L1 and L2 acquisition patterns are similar, according to recent research: "Some researchers argued that even those who spoke a second language with a high level of accuracy were using a qualitatively different mechanism than native speakers."

But further research has shown the opposite: "We show that the learners' brain activity looks qualitatively similar to that of native speakers, suggesting that they are using the same mechanisms."

However, ongoing research is confirming that the processes of L1 and L2 learning are similar: "Results suggest that properties that are shared between the first and second language show patterns of brain activity that are very similar in learners and native speakers. This suggests that learners build on the representation for language that is already in place when learning a second language."

These results would indicate the more modern teaching methods for FL and ESL such as the "Natural Approach" and the "Direct Method" have validity as opposed to strictly grammar-based methods.

L2 learners also learn whole units or chunks of language they use in given situations without realizing the meanings of the individual units. The chunks are remembered as whole units are not analyzed or constructed. These phrases serve a communicative function even if the parts are not understood.

An equivalent process would be an English speaker abroad learning how to say "Where is the bathroom?" in order to meet an immediate need without worrying about question formation in the L2. These memorized phrases allow the learners to make themselves understood immediately in certain communicative situations.

Chunking serves as a transition from vocabulary labeling to learning the grammatical rules. Chunks that serve the communicative needs of the learner will be remembered and will serve as steps to language acquisition.

The chunks precede the transition to the further step of constructing original utterances. Chunks that do not serve this useful purpose will be forgotten, and constant drilling on isolated chunks will not convey meaning and will not enhance language acquisition.

This is why dialogue memorization and constant repetition (audio-lingual method) does not lead to true language acquisition. Drills and repetitive practice teach the forms without the functions that true chunks perform.

The chunks of language begin to be analyzed and broken down. A question may be learned as a unit. Later learners will begin to break it down and produce new questions. Learned chunks can be expanded: "This is a book" can become "This is a new reading book."

L2 learners acquire the grammar in a relatively predictable order — not necessarily the order given in the book. The Natural Order Hypothesis simply states that certain structures tend to be acquired early while others are acquired late, according to both Krashen and Terrell.

Language acquisition — as opposed to conscious rule learning — is a subconscious process that the learner may no even be aware of, Krashen reports. The overt learning is done as the student studies the rules and corrects errors.

For example, ESL students may speak and write fairly well, but they may still leave off the "-s" from third-person singular verbs. The rule has been taught, but the production is lagging behind because the structure has not yet been internalized. On the other hand, the plural maker "-s" is acquired fairly early.

Learners go through a series of stages in L2 acquisition. In the first or "silent stage," the ESL student may seem unresponsive as if not learning anything. As in the case of first-language acquisition, the learner is beginning to process the stream of information and break it down into manageable parts. This stage is also called the preproductive or comprehension stage.

The next stage is early speech or a one-word stage which is followed by "speech emergence" where learners produce sentences, Terrell reports. The student's native language plays a role in L2 development since a similar grammatical construction in the student's home language may result in errors in English. For example, learners from all language groups produce "no + verb" (I no go) at an early stage in producing negatives.

Adults have problems with some aspects of grammar as they are learning L2, according to Schmid:

"Every time I mark a run of scripts from my adult students, most of whom are from non-English-speaking backgrounds, I find that while they are amazingly good at using a wide range of vocabulary, appropriate style and complex grammar, they often struggle with some simple grammatical rules."

By understanding L1 and L2 acquisition, instructors will be able to help learners achieve proficiency in their new language. A more natural approach mirroring L1 acquisition is an improvement over "lockstep" methods.

Critical researchers in L2 methodology have moved away from mere drills and practices. A new study shows their writing "reflected a growing emphasis on loosening 'lockstep' mechanisms for organizing learners and curriculum."