Why do we still use class rank to select graduation speakers? 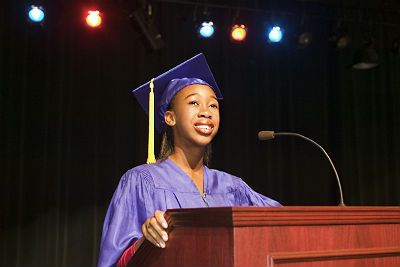 The movement of schools across the country from a traditional to a standards-based or competency-based grading model is calling into question the age-old practice of asking the valedictorian and the salutatorian to be the speakers at graduation.

New Hampshire's Concord Monitor recently published a story describing how several New Hampshire high schools have already abandoned this model in favor of one that opens up the privilege of being selected as a graduation speaker to a much broader cohort of deserving students.

Guskey argues that schools must decide whether their intent is to select or develop talent. Selecting talent, he explains, is indicative of poor teaching, because it is achieved when teachers and schools create the greatest possible variation of assessment scores so they can distinguish between students with greater talent from those with less.

Developing talent requires a standards-based or competency-based grading approach. Educators must first identify what they want students to learn and be able to do. They then work to do everything possible to ensure that all students meet or exceed those learning expectations.

Guskey went on to explain that most high schools continue to compute class rank because they believe colleges and universities demand it. According to Eric Hoover, this is not true. In a 2012 survey, Hoover concluded that "High School Class Rank Declines as a Criterion for College Admission."

In his research, Hoover determined that only 19 percent of colleges and universities give class rank "considerable importance" in the application process. This decline is due to the fact that many admissions officers have come to recognize a large discrepancy among high schools in how rank is computed.

With the declining importance of class rank, many high schools are now faced with the question of what to do with the graduation titles of valedictorian and salutatorian — titles that were often awarded to the students who were ranked one and two, respectively, in a graduating class. At many of these schools, these titles came with certain privileges that often included the right to be a speaker at graduation.

To ensure that these titles are accurate, they shouldn't be computed until all of the final grades have been recorded. This means many high schools are not in a position to calculate these titles until just before graduation, at best. This shift makes class rank a poor criteria to use when selecting graduation speakers.

If class rank is not a good option, then how else could schools select graduation speakers? Why not invite interested students to submit a speech in advance to a jury of educators who will select the best speeches for the graduation ceremony?

Such a practice would encourage students who have a passion for speaking and a story to tell to share their talents in front of a larger audience. I have no doubt their stories will be inspirational, meaningful and appropriate for a high-profile ceremony such as graduation.