Why do my joints crack? 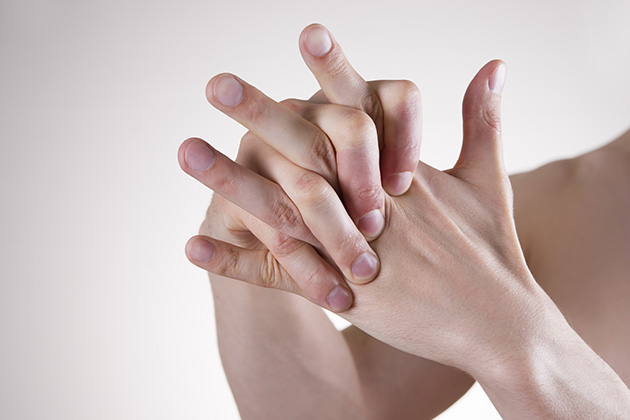 Cracking, popping and clicking joints are a common sound to most people. Some experience this noisiness more than others, but in most cases it isn't painful.

But what is it causing this noise? And should it be cause for concern?

What causes cracking in the joints?

There are several things that could be causing the noises coming from your joints:

This is the most common explanation for those pops and cracks that most people hear from joints such as the knees and shoulders and what happens when you deliberately crack your knuckles or neck, for example. The vast majority of the time these noises are completely painless and often there is little sensation at all to accompany the noise.

Previous explanations have centered around the noise being the bursting of a bubble of gas within the joint, but more recent research suggests that it could be just the opposite!

A team at the University of Alberta looked at knuckle joints using real-time MRI scans. They applied a traction force to observe what happens in the joint when a knuckle cracks. Rather than the bursting of a bubble (known as cavitation), a bubble of gas appeared to form.

Most joints in the body are "synovial" joints — meaning they are surrounded by a synovial membrane and are lubricated by synovial fluid that surrounds the joint surfaces within this membrane.

The explanation for this phenomenon goes that if you increase the space between two joint surfaces, there comes a point where there is no more fluid to fill the increasing space. At this point, it's a bit like forming a vacuum and a cavity (bubble of gas) forms to fill the space, which is responsible for the sound.

While this has been shown in the knuckle joints, it has yet to be captured in larger synovial joints. It is, however, anticipated that the images would show the same bubble formation.

But gas isn't always responsible for popping or clicking noises.

If a popping noise comes from near a joint, rather than deep inside it, and is accompanied by a sensation of something moving, flicking or clunking, then it's most likely something else. In these cases, soft-tissue tension is probably to blame.

Tight tendons and muscles that cross a joint can move position as the joint moves and essentially "flick" over any bony prominence. This is common at the knee, hip and shoulder, in particular.

This rarely causes pain, unless it happens repeatedly. If the same tendon is repetitively rubbing against a bony surface, this can cause irritation of the tendon, and some inflammation and tendon damage may occur.

This is the most likely scenario in cases where pain is also present. As we age, and sometimes as a result of injury, the cartilage lining our joints degenerates and essentially wears away.

When this becomes severe and there is little, or even no cartilage remaining, the two ends of the bones forming the joint can come into contact. Repetitive rubbing of these bones causes pain and inflammation within the joint and is known as osteoarthritis.

The type of noises made by arthritic joints is a little different to the ones caused by gas bubbles or tendon movement. It tends to be more of a grinding noise that is more long-lasting throughout a movement. This is known as crepitus.

Are cracking joints a problem?

Generally, no. If there is no associated pain at the joint, then it's not usually an issue. If you start to feel any pain in the area, the frequency of clicking increases or the joint starts to feel unstable, then seek a medical opinion.

What can I do about it?

In most cases, you don't need to do anything. If the clicking bothers you, then there may be certain things you can do.

Strengthening of the muscles surrounding the joint is a good place to start. This will help to stabilize the joint. If the clicking is due to a tight tendon or muscle, then working on stretching this area may also be beneficial.

Is it OK to crack my neck/knuckles deliberately?

It isn't recommended. There is some evidence to show that frequent knuckle cracking can, over time, lead to functional hand impairment, including swelling and low grip strength. There doesn't, however, seem to be a direct link to the development of osteoarthritis as the old wives' tale suggests.

Still, it is possible that repeatedly placing a traction force on a joint and separating the bones could result in ligament laxity and a more unstable joint. There are also incidences of acute injuries such as dislocations and ligament sprains sustained while performing such self-manipulations.