Why cultural understanding is essential: Part 2 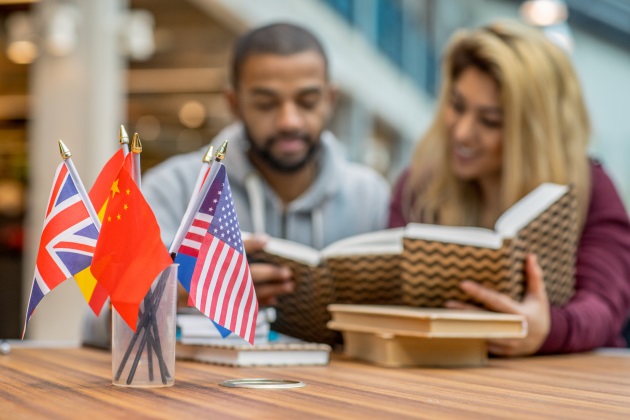 Learning languages enables people to develop their identities and allows them to be involved in multiple cultures. Speaking several languages makes people feel empowered and gives them choices and perspectives.

What appears very clearly in this research is how, in addition to identities connected to the different languages they speak, multilinguals can also develop an identity that transcends those that are language-specific (Henry, A., Fall 2017).

The Arabic proverb states “Every language is a person,” referring to L2s.

In learning more than one language, a person can develop self guides for each language, for example an ideal Lx self and an ideal Ly self (552).

Language learning involves culture as well. One can be fluent in L2, but cultural roadblocks can still interfere with communication.

Example of a cultural conflict

Students coming to the West to attend college want to focus on studying since many are on time-sensitive visas. Sometimes the native speakers they encounter have different priorities. Here is an example of an international student from Bangkok titled, “A cross-cultural problem: American university dorm life (Gebhard, J., 2009).

Siriporn arrived at her American university full of enthusiasm. She wanted to be an excellent student. Studying was the first thing on her mind.

She was surprised and dismayed by her roommate’s focus on partying and loud music. She tried hinting to her roommate, but the message did not get across. She told a friend within earshot of the roommate:“I wish my roommate would not have parties every night.” But nothing Siriporn said or did seemed to make a difference.

In most other countries, academics are more rigorous. Many countries impose a qualifying or comprehensive exam to get a BA or BS degree, and students can fail even if their grades are passing. When they go abroad to study, they may feel that the local students are not serious.

College is more than reading a text and writing an essay. The demands faced by ESL learners include items that may not have been taught in ESL class.

These interactional skills are necessary for success and include the ability to comprehend and participate in the social demands of the classroom and the school; knowledge of the norms to initiate, sustain, and close communication with teachers, staff, and other students; knowledge of the norms of turn-taking; following the appropriate behavior; and demonstrating knowledge.

Turn-taking, for example, is a cultural skill that students may need to work on as they adjust to life in an English-speaking country. It involves a process of “alignment” where they acknowledge each other’s viewpoints and engage in meaningful discourse.

Alignment means that the speakers understand each other and know that they are being understood. They provide additional information in harmony with each other’s moves.

Taken together, these alignment moves index shred understanding along with the ability to adopt the other’s point of view and to speak in the other’s voice (Dings, Fall 2014).

As the perceptions of most human beings are shaped by culture, the most important contribution intercultural communication studies have made for second-language teaching is that they have increased instructors’ awareness of the intricacies of managing a multicultural or a monolingual classroom in a foreign learning context, improving teaching and classroom quality for second-language students (Akhbar, I., October 4, 2017).

Culture through language thus both reflects and affects one’s worldview, serving as a sort of road map to how one perceives, interprets, thinks about, and expresses one’s view of the world (Akhbar).

As they study L2, students gain more understanding of the culture connected to that new language.

Through L2 study, it is believed that students gain a knowledge and understanding of the cultures that use that language. However, intercultural communication studies show that in order to achieve higher developmental levels, students need to understand the sociocultural and pragmatic norms of a particular cultural way of thinking (Akhbar).

Studies have illustrated differences that exist in turn-taking, degree of directness, attitudes to the acceptability of disagreement and direct criticism, forms of address, verbal and nonverbal feedback, appropriateness of topics, and adjacency pairs such as in greetings, apologies, compliments, requests, leave taking, etc. Different conversational styles are generally culturally determined (Akhbar).

Native speakers may misinterpret the L2 students’ attempts at communication sinceparalinguistic items such as stress and intonation and gestures are not universal.

Instructors should make second-language students aware that native speakers may not always be prepared to accept the validity of differing styles of communication, which may result in communicative attempts being misunderstood or rejected. Students should be prepared for this possibility, being careful not to take such behavior personally or be discouraged by it (Akhbar).

Employers do not want people with just the technical skills. They also need workers who possess soft skills related to communication, innovation and collaboration. These skills presume knowledge of the surrounding culture and its values.

Students in ESL need to do more than master the language. The must also be familiar with the underlying culture. Yalcin Akin, executive director of Orlando Science Schools, stresses that adding arts education enhances problem-solving skills (Akin, Y., October 22, 2017).

These are all capabilities gained through a well-rounded education that includes the arts (Akin).

Most ESL programs include a cultural component as part of the core curriculum or as an elective or as part of the extracurricular activities. Students who are suddenly immersed into a new cultural environment face a sudden change in their cultural identities. The ESL classroom is a place that should ease this change.

The ESL classroom is often the only place where students can share their concerns about cross-cultural issues such as coping with culture shock and adjusting to U.S. culture (Maum, R., 2008).

Religion and faith are important parts of the identities of both learners and instructors.

Language learners and teachers are so often asked to leave core parts of their identities at their classroom doors, including religion (Bigelow, M., Summer 2018).

Religion is as complex as categories such as race, class, gender, and sexuality, but this complexity has yet to be thoroughly understood in our highly secularized mainstream research agendas (432).

Religion plays an indirect role in language teaching since the learners come from a variety of faiths. Teachers need to understand how people use language in different contexts including religious contexts.

Importantly, one might argue that the growth of secularization in many societies in the world may be a consequence for the need of “in-between” spaces wherein different collectives of people of the world may come into contact productively, even as they simultaneously engage with their own religious, cultural, and linguistic practices (Sarroub, L., Summer 2018).

Young people are socialized while learning the new language and they are encouraged to join the cultural, educational and religious practices of where they live (455).Churches, mosques and synagogues are becoming sponsors of refugees from many areas of the world, providing literacy training, ESOL, job training and aid (456).

Most people are religious, and higher education should include a discussion or faith while not endorsing a particular belief system.

A comprehensive education includes learning about and discussing faith-related topics. Now such discussions are not possible because the rules that keep religion off school grounds are strictly enforced (Green).

A lot of effort these days is going toward diversity education as the society grows more and more complex. But is that enough? Writing forthe Chronicle of Higher Education, author Eboo Patel notes that faith is often left out.

After listening to the laudable plans of college administrators and faculty members for strengthening diversity education, I often inquire about how much time they are allotting to increasing their students’ understanding of religious identity and diversity. Answers range from "I’m not sure" to "Probably not enough," along with the occasionally surprised look that the question was even raised (Patel, E., October 29, 2018)

Most colleges offer comparative religion classes. Perhaps a “sheltered” ESL version can be offered. Such a class would help international students understand the diversity in the host nation and help them interact with fellow students who may be of different faiths.